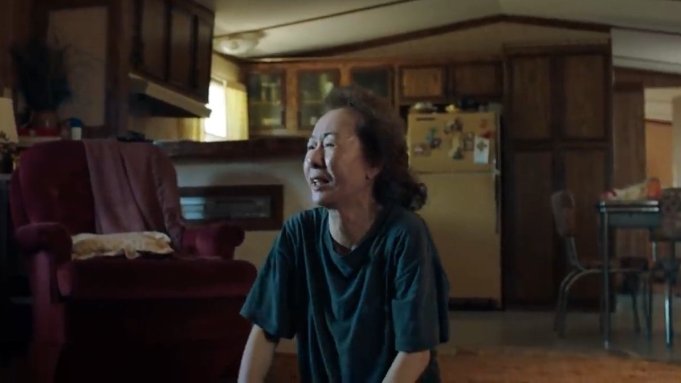 “Minari” is filmmaker Lee Isaac Chung’s semi-autobiographical tale of a Korean American family starting a new life in 1980s Arkansas. The characters — Jacob played by Steven Yeun, Monica played by Yeri Han and Soonja played by Yuh-Jung Youn — live in a small mobile home on an isolated patch of land, in the hope of creating a farming business.

The Oscar-nominated director and screenwriter breaks down his favorite scene from the movie, depicting a scenario important to him and to a generation of Korean Americans who grew up in the rural South.

This scene comes at a moment in the film, after Jacob (Yeun) and Monica (Han) have come to a compromise, they have decided that Monica’s mom is going to come live with them so Jacob can pursue his farm and that’s this great compromise that they’ve reached.

In the previous scene, you’ve seen her be a little bit mischievous with the kids, but her mischief might be deeper than that, she is going to mess with the dynamics of the family positively.

She calls to attention this song that’s playing on television and that it was once Monica and Jacob’s favorite song, and that they used to look at each other lovingly. She forces them to remember something that maybe they had been shutting out all this time.

When I wrote the scene, I knew that this song mattered a great deal to so many people. That was an intentional choice to show the song and then to let that bleed into the landscape of Arkansas to show that discord.

To me, the scene is important because I feel that it reveals a wisdom that we [as an audience] have not been privy to. We think she might just be this crazy grandmother character, but this is the starting point of seeing that she’s up to something much deeper than that.

A lot of Korean Americans grew up with VHS tapes of Korean TV in our houses, and that is what starts this scene. It was in the script.

If you’re in the rural South, you don’t get Korean TV, unless you can find a Korean grocery guy who has been taping Korean programs and then offering them. I don’t know what the copyright laws are, but this was just the way that everybody did it. I was used to always having a stack of Korean television VHS tapes growing up.

One of my favorite shots in the film is when we go from Jacob at the table — sitting and eating — we rack focus to Monica when she comes in for a close-up, and we do it in one shot.

Soonja is talking about memory at that moment, saying, “Remember when you used to do this and you used to sing the song together?”

I didn’t want to call attention to that shot, but it was meant to evoke this feeling of Jacob being a memory, a blur behind her, and you see that in the framing of it.

I shot two versions of that. One, she would go and walk away, and go back to fixing some things at the counter and leave Jacob there by himself. I thought that was the way to end that scene, with Jacob all alone. That was going to emphasize this feeling of loneliness.

On the second take, I had her go and sit next to him, so they are sitting there together and eating. I felt that came across better than what I had originally conceived.

Later in the movie, Paul (Will Patton) comes over for dinner and it’s another dinner scene. There’s something more communal about that meal and something more significant that happens with that meal as a result.

The reason for that is we all have a memory of our fathers, when they ate, they would eat like it’s just a job; you’re eating this food and you’re devouring it. The way Steven eats in that scene convinces me of him being Jacob and representing that generation of men.

I think a lot of our mothers were doing what Monica was doing, too, where she isn’t even getting to her meal until everybody has gotten their food. That is honestly what happened in the Chung household.

Watch this exclusive making-of featurette below: