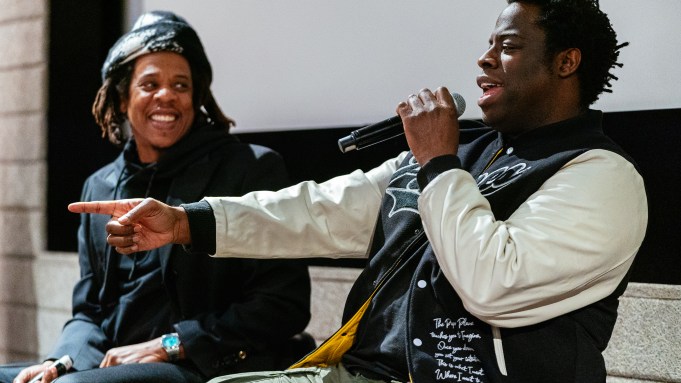 It’s a big deal when multi-hyphenate Shawn Carter — better known as Jay-Z — makes an appearance pretty much anywhere — and his presence at a Q&A at Hollywood’s Neuehouse on Tuesday night, moderated by Variety‘s Jazz Tangcay, was a really big deal.

Carter, who served as a producer on Netflix’s “The Harder They Fall,” was at the event to talk about his collaboration with friend and director/composer Jeymes Samuel.

Jay-Z, Jeymes and Jazz. Had the honor of moderating this Q&A tonight #TheHarderTheyFall pic.twitter.com/33gAqIz62N

A fully-vaxxed and tested crowd of AMPAS voters and members of the music branch packed into the screening room as Carter explained how first-time director Samuel — who also goes by The Bullitts — spent over a decade going through different iterations of the film, which stars Regina King, Jonathan Majors, LaKeith Stanfield and Idris Elba.

Jay-Z — who had specifically asked to be called by his real name during the event, although Tangcay slipped and called him Jay at one point; he laughed and said it was OK —  spoke about the importance of the film’s all-Black cast.

“The fact that we could tell stories of people that really existed and bring their story to life,” he said. “It’s not a documentary — it’s a fantasy, but the names of people existed, and that cherry on top for us is super prideful.”

Woven into the film is an original score by Samuel and original song “Guns Go Bang” performed by Kid Cudi and Jay-Z and written by the three of them. With the song tipped by many pundits to crack the final five nominees in the Oscars’ Best Original Song category, the pair talked about crafting the song which plays over the film’s opening title sequence. “We call that our ‘verbal kit’ moment, when it stares you right in your face,” Jay said, noting that the film was already in the editing process when Samuel called him.

“We were making sure that the story we were discussing and telling in our heads manifested itself on a screen,” Jay said. “I had the song, and Jeymes put strings on it. I was like, ‘I got it, and just told this whole story of the film in 12 bars.”

He continued referring to the first verse which he sings and reveals the plot of the film. “When you’re listening to it for the first time, you’re not looking for clues. It’s when you hear it back and you’re like, ‘Oh wow, you just told me the whole plot of the movie.”

However, the song’s last-minute addition to the film almost didn’t happen. Both revealed that originally an unnamed Elvis Presley song was set to play over a different opening sequence. Samuel says, ”It was a real homage to the Old West with Nat Love riding through the desert.”

It was Netflix’s executive vice president of production, Tendo Nagenda (who was in the audience Tuesday), who suggested there was a chance to do “something dope there,” Samuel said. “We did a reggae remix of the Elvis track, and it shows how closely related the two genres are. But then came Tendo moaning at me every day: ‘It’s a lot of real estate to wait two and a half minutes,” Samuel said.

And so “Guns Go Bang,” came along. “There was no way that couldn’t be at the beginning,” Samuel said. And the title sequence is an homage to “The Sting,” with Nagenda getting his way in the end.

The team used the soundtrack to help bring a new take on the Western genre, including artists such as Barrington Levy, Koffee, CeeLo Green and Lauryn Hill into the mix.

“We were pushing it,” Jay said. “The way the music plays here. At first glance, if someone told you it was going to be Reggae against a cowboy film, they’ll be like, ‘Nah, that don’t go.’ But as you see, it’s seamless because the music that plays in Westerns is not Western music. There’s an Italian guitar and we’ve come to accept this is what that is.”

Samuel added, “I’ve always believed that composers should work hand in hand with not only the directors but the writers. If the director has a strong vision of where he’s going, he should be collaborating with the composer because the score could help dictate where you put the camera, and how you shoot.”

He added Jay’s contributions to the film went far beyond the music, noting his suggestions to the film’s ending (SPOILER ALERT). Speaking of the two characters in the film’s end, he said, “Jay was like, ‘Rufus has his back to him, his guns are down and he’s nursing a drink. Nat Love can never shoot a man in the back. Pick up the guns and turn him around’ — and that’s why he’s Jay Z.”