Continue to Variety SKIP AD
You will be redirected back to your article in seconds
Nov 24, 2021 2:15pm PT 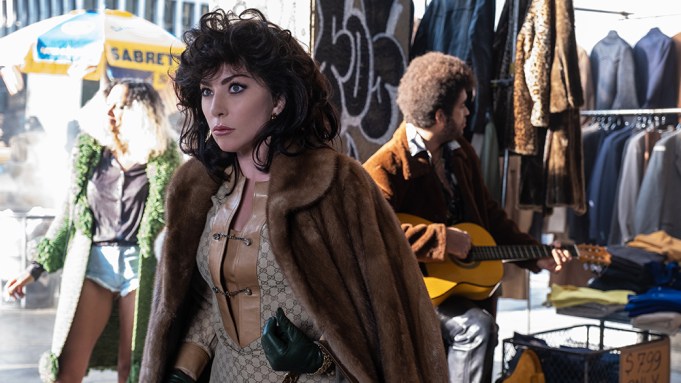 Costume designer Janty Yates was fortunate to have unprecedented access to the Gucci archives when she was planning the looks for “House of Gucci,” but the wardrobe for the Ridley Scott film also encompassed pieces from Yves Saint Laurent and several noted menswear tailors.

Yates says the Gucci collection she saw was “exquisite but small,” since the Gucci Museum in Florence, Italy, was in the process of moving its archive. But she was still able to use accessories and close to 20 outfits to help build the film’s high-fashion designs.

The rest of the looks were put together from scratch or pulled from costume houses. Patrizia Reggiani (portrayed by Lady Gaga) preferred French designer Saint Laurent over the deluxe label that she had married into. Yates made that her starting point and took creative license with the rest of the designs, which span three decades — the 1970s to the 1990s. “We created looks that Saint Laurent had done in the ’70s. Tirelli Costumi in Rome also opened their doors to us,” says Yates, who had Gaga’s own vintage collection to choose from as well.

“House of Gucci,” which opens Nov. 24, is based on the true story of Reggiani, who meets and falls in love with Gucci heir Maurizio, played by Adam Driver, before arranging to have him murdered.

The seductive and daringly lowcut red dress worn early in the film by “LG,” as Yates fondly calls the film’s leading lady, was changed on the spot. When Gaga showed up on set, Scott wanted more leg. “We had her up on an apple box, and we cut 18 inches off the bottom of that dress,” Yates recalls.

Gaga played a large part in bringing Reggiani to life, collaborating closely with Yates, who had the idea that since Reggiani’s father owned a trucking company and was fairly well off, he would have given Patrizia a red Hermès scarf as a Christmas gift. A famous British label also made an appearance as Patrizia asks Maurizio on a first date. “I wanted her in a Burberry coat, but Adam wanted to wear one too,” Yates says. It was Lady Gaga’s idea to wear the beige trenchcoat in its reversed style, with the iconic plaid lining on the outside, and Yates’ buyer found a vintage example online and purchased it.

Reggiani does wear archival Gucci a few times in the film. And one documented time Reggiani was sporting Gucci was on her wedding day. Yates describes Reggiani’s real-life wedding dress as a simple “Catholic girl wanting to please Daddy” look. But the movie version ended up being a handmade creation with a high-low hemline and classic A-line silhouette. It was more elaborate and took more than eight weeks to hand-sew out of lace.

Yates accessorized Gaga, mixing Boucheron and Bulgari pieces with rented costume jewelry, particularly from Pikkio in Rome. Even the large wedding ring, which plays a starring role, was a costume piece. “Patrizia always wore jewelry, and LG would never finish a fitting without doing every single item of jewelry, nor did she repeat the same outfit or jewelry. Once we shot something, she never repeated looks,” reveals Yates.

(Not every outfit seen in the trailer appears in the finished film, however. Reggiani wears a “beautiful turquoise halter neck” when she’s six months pregnant in the Studio 54 scenes, Yates says, but it didn’t end up in the final cut.)

The socialite Gucci couple owned properties in Milan, New York and St. Moritz. It’s at the latter resort where Maurizio bumps into his childhood friend Paola Franchi (Camille Cottin), who becomes his mistress. The utterly stylish white ski outfits were in Scott’s original screenplay, and were made by PostScript in Italy after Yates found vintage examples at Annamode Costumes in Rome. When Reggiani shows up, she’s in a bold red ski suit that was originally meant to be bright yellow, but Yates changed it at the last minute, because red was the bolder option.

Yates wanted Driver’s Maurizio to show an arc in his costumes, transitioning him from Savile Row suits to looking more relaxed with his new girlfriend. Leonard Logsdail, a tailor whom Yates had worked with before, was her cutter. “I wanted Maurizio to get out of the stuffy gray double-breasted look. By the end, in the ’90s, he’s in a velvet suit, which Adam didn’t want to wear. But I wanted to loosen him up because he was projecting this younger feeling to be with Paola,” says Yates.

For the fanciful suits worn by Jared Leto, who plays Paolo, Yates called on another dynastic family, Naples’ Cesare Attolini label, which has created suits for presidents and world leaders. Run by brothers Giuseppe and Massimiliano, the label made Leto’s eye-popping raspberry corduroy suit from fabric Yates brought to them.

While Paolo’s fashion sense was off-kilter, his suave father, played by Al Pacino, needed to look as chic as possible. In total, Yates had 14 suits made for Pacino in beige, burgundy and navy. “He had the most beautiful, expensive fabrics. He had a windowpane-checked jacket with a smaller checked waistcoat. He’d always have a buttonhole,” she explains. One accessory was a step too far for Pacino, though: Yates had outfitted the character with a Panama hat early on, but Pacino didn’t want to wear one. “He said, ‘But my hair looks so great!’ So we never did that.”