Costume Designer Grace Snell on the Look of ‘The Souvenir: Part II’

A melancholic memory piece that continues to follow the young, budding filmmaker Julie’s (Honor Swinton Byrne) personal and artistic journey, Joanna Hogg’s semi-autobiographical “The Souvenir: Part II” picks up her tale where the former film had left it off, sculpting a B-side just as haunting and immersive.

Reuniting with Hogg after infusing “Part I” with her thoughtful vision, costume designer Grace Snell once again dresses Julie and her world through a sophisticated ‘80s lens. It’s a refined aesthetic that graciously sharpens and matures while the five-year period in which “Part II” is set progresses and Julie navigates her grief over Anthony [Tom Burke]; her older, manipulative boyfriend who passes away from an overdose in “Part I” after an invigorating yet toxic relationship with the innocent Julie. Snell also shoulders a double-duty of sorts here as one of the film’s key artisans. Mirroring the film-within-a-film structure of “Part II” as Julie makes a personal film school graduation movie about her experiences with Anthony, Snell repurposes some of her “Part I” looks with the misty polish of both Julie’s and Hogg’s remembrances.

In a recent conversation with Variety, Snell—a two-time British Independent Film Awards (BIFA) nominee for her work in both films—broke down her approach to costuming Hogg’s sequel with consciously stylized colors and silhouettes.

(The below is edited for clarity and flow.)

Let’s start with Julie’s evolved style in Part II as a young woman moving through her grief and growing into a mature voice.

We definitely wanted a departure from the Julie that was in Anthony’s shadow, under Anthony’s spell. [In Part II], we pick up exactly where we left off in [Part I]. So I didn’t want to make an immediate jarring change. There needed to be some continuity. I did this through one scene, when Julie meets Antony’s parents [wearing] that scarf [around her neck]. That was the last time we get a sense of the [old] Julie. I just introduced a jacket and some new things. I wanted the overlap to be seamless. The film is [set over the course of] five years as well, so Joanna and I agreed we’d like to push the fashion a bit [with] a few more conscious choices. Along with production designer Stéphane [Collonge], Joanna came up with a color palette for the stages of grief to use as a framework. That was a nice approach. I liked this idea of playing around with light and dark. And we never wanted to [use] black—that was a conscious decision. [Instead, we used] midnight blue when we wanted [something] dark.

Julie gradually relaxes into her Part II style, in roomy but well-tailored trousers, shirts and sophisticated blazers, confident and sexy, can you talk about that?

When I watched “Part I” again, I really loved Julie in her coat that’s quite oversized. It’s a man’s coat. That was kind of a starting point for me to grow in Part II. But also [I took] Joanna’s generous input on how she likes to dress. She loves suits, blazers and this masculine outer shell. I had fittings with Honor. She just wore them so well. Not many people can pull off that look so effortlessly. It [can] look forced or stylized, but it looked completely natural on her. But I also wanted to make sure that we didn’t always associate that too much with Julie, so I introduced skirts and dresses. She has such a wide interest in fashion. But her go-to look would be a blazer or a jacket.

While we’re on jacket-and-trousers, what is the story behind her gorgeous pair of silver pants? Were they leather?

That particular stage of grief was assigned [the color] silver. One of my inspirations for them was the ’80s fashion designer, Romeo Gigli. He was a great influence for my mood boarding in the early stages. And then Joanna said, “I was obsessed with Romeo!” [We used] this bizarre metallic material—I can’t even remember what they were—but I knew it would work on camera. And what I love about them in that scene is, it’s quite a dark scene but [the pants] catch the light so well. She comes into the hangar of the film set like a shining light. There is a glimmer of what she’s capable of being.

Julie’s coming-of-age story comes full circle in Part II, as she makes a film about her experiences in Part I. And your costumes are very much a part of that journey. What was it like for you, to see your Part I work come back to life like that? Some pieces seemed exactly the same and some felt like renderings.

I used a lot of the same pieces and then I deliberately found some pieces that looked slightly similar, like a pair of shoes or a shirt. I did that because I liked the idea that I was a costume designer for Julie within the film, so that there was the Grace designing for Joanna Hogg. Then there was a different costume designer, designing for Julie. And then a different costume designer designing for Patrick [Richard Ayoade], etc. So I didn’t want to get everything completely correct by the book. Because a costume designer approaching an autobiographical piece would probably be given some pieces of clothing by the director, but then would be asked to [supply] others, maybe based on pictures. [That] small detail was important to me. We just had very [key] pieces [identical], like the coat and the scarf around [Anthony’s] head.

And then deliberately, Garance [Ariane Labed, who plays Julie in Julie’s student film] wore the pink cardigan and cherry blouse in different ways. Because that’s what happens, it’s like Chinese whispers in essence, a re-interpretation. It was really exciting actually. It was just very meta. My head had to be thinking of many things at once.

There are two specific outfits that I would love for you to break down. One, her beautiful graduation presentation outfit—a mandarin collar jacket, high-waist trousers and sash belt, all in gold tones. And the other, a gorgeous one-shoulder, square-neck cocktail dress that she wears for her birthday.

With the midnight blue dress at the end of the film: it’s a color that we now associate with Julie. It’s about this independent woman, dressing for herself and loving clothes; not necessarily having a formula when she goes shopping. Maybe she just loved the elegance and [that] it’s grown-up. And because it’s her 30th birthday, this is the oldest we’re seeing Julie. I did want us to look at her in a different light. [That dress] just feels really playful. I hate to use that word normally, but it doesn’t feel too serious. She doesn’t take herself too seriously; she’s just very strong and independent. I found it online at a vintage shop that I really love.

With that particular [graduation] outfit, the stage of grief is we are in is acceptance and its [color] was gold. I said to Joanna that I would really like to dress the whole audience in shades of golden brown. Joanna was really up for that. It was a stylized choice, [something we didn’t do in Part I]. When Julie was in this gold jacket, everything [feels] very warm and together in that scene. I had found that jacket in a charity shop a month earlier for 5 pounds. I had it on a hanger in the room for ages. [Then] my seamstress and I conceived the trouser pattern, the same that we used for the metallic pants. We took the garment to fabric shops to match the colors. And so we made the trousers and the sash—it’s one of my favorites as well. There is a catwalk show that Romeo Gigli did, which is all browns and golds. That was a big inspiration for me. What was funny about it was how similar it is to the gray Venice suit in Part I. The shape of the jacket, [also] the collar and the buttons. So I loved that there was continuity there, but in the opposite color. Gold rather than silver.

There seems to be a subtle, slight shift towards the ’90s here in Part II, to perhaps reflect a transitional period in style. We’re still in the ’80s, but we also see signs of the incoming fashion.

For the costumes, I do try to get inspiration from a set of five-year periods around the [actual] period, whether it is the future or the past. So I was definitely looking at early ’90s. I was looking at Yohji Yamamoto. And we do want to see the progress of time here. Whereas in Part I, we kind of wanted to make it timeless. It was important to show how Julie was becoming a filmmaker and independent in her own right. And so it’s important to start showing these markers of time in the costumes. You don’t want to scream, but push it forward where the story is going slightly.

I want to mention Richard Ayoade briefly, who plays a hilariously obnoxious, in-your-face sort of character. What was your approach to his costumes? I love the pink and white suits and that fur coat.

Richard and I worked very closely together. There were probably over 50 emails about this character. He had a lot of ideas which were welcome. He wanted to wear those sunglasses. I had the idea of having a quite simple silhouette, [like] he’d always wear a suit, whether it’s with a shirt and a tie. We left his shirts crumpled on purpose. And then he was generous with some of his own suits—he’s got a lot of suits in his wardrobe. That’s how I work as a designer: I like having collaboration with an actor, even if I don’t agree necessarily with some of the things they bring to the table. I really value their opinion and the character work they’ve done. I can’t remember where the fur coat came from but it really works within that Soho alley. Designing [costumes] for [his character Patrick’s] musical was also a lot of fun. I had all the suits made for his actors in Technicolor bright colors specifically to be shot in black and white. 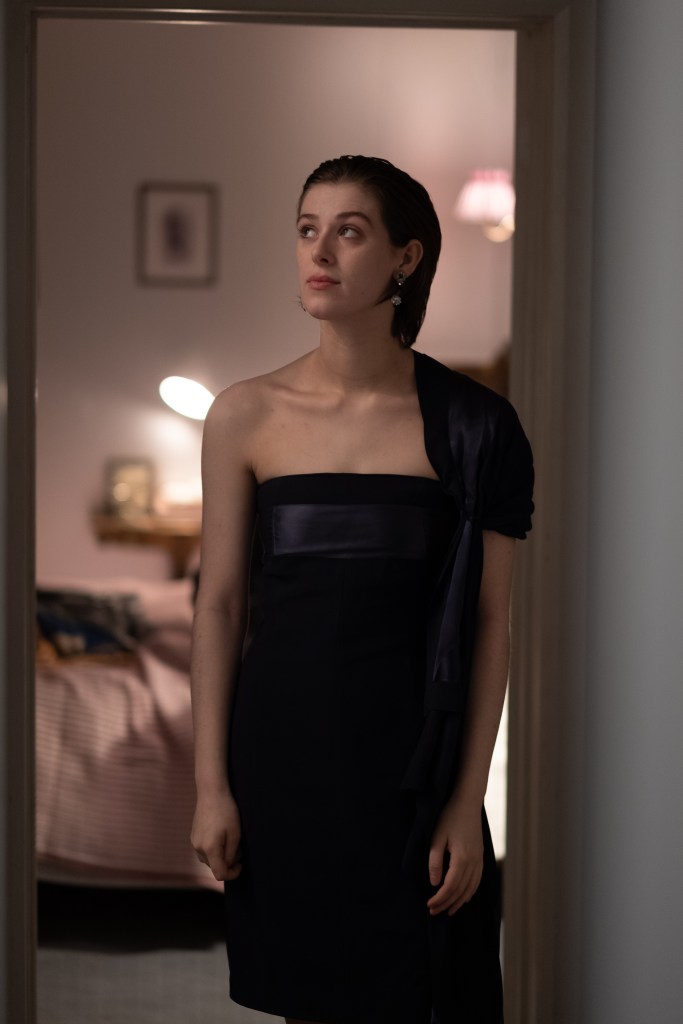