Doc Crew Behind ‘Billie Eilish: The World’s a Little Blurry’ on Capturing a Star’s Metamorphosis in Real-Time 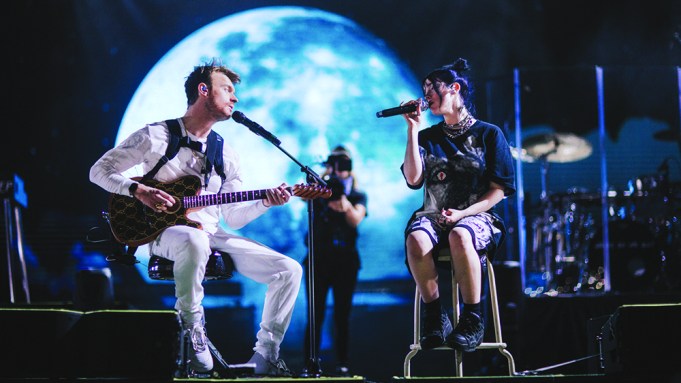 Courtesy of Apple TV Plus

Filmmaker R.J. Cutler’s interest in documenting Billie Eilish dates back to 2018, when he contacted director of photography Jenna Rosher about a rising star he saw interviewed in Vanity Fair. “I watched those and was completely fascinated and blown away by her from the get-go,” Rosher says of the magazine’s series, which checks in on Eilish yearly.

To chronicle the moment in which she became a worldwide phenomenon, “Billie Eilish: The World’s a Little Blurry,” available on Apple TV Plus, follows the teen singer as she writes and releases her debut album, interweaving intimate family footage with concert clips and rare behind-the-scenes moments.

Rosher, who worked with Cutler and editor Lindsay Utz, was not looking to make a celebrity vanity piece or a talking-head documentary. “We were interested in telling a story about a young woman coming of age on the world stage,” she says.

For a film that was shot verité style, the first-time that the DP met Eilish a week into the singer’s European tour in 2019. As Rosher recalls: “I went backstage, I saw the show and met her. The person I met at that moment is a very different person from who we landed with at the end of the film. And that’s the beauty of the movie, is that it is a metamorphosis, that evolution.”

Rosher connected with the then-17-year-old Eilish right away, observing the person behind the performer. “What was she doing backstage? Who was she trying to connect with on her phone? What friends were stopping by, and what kind of conversations they were having? … And I think it’s one of the most important things when making verité is just patience, curiosity and trust, or sort of the three important factors starting out and verité and having an openness to know like, you know, where’s this night going to go?”

As it turns out, the singer was a fan of “The Office,” and wanted the documentary to feel like the hit series. “I watched Billie watch ‘The Office’ and how she reacts to the show,” says Rosher. “She watches the same episodes over and over.”

What did that mean for the DP? It meant Eilish wanted the camera closer to her than ever, not ignoring it, and even breaking the fourth wall at times, and it helped play a big part in capturing her story.

Helping capture footage was Eilish’s mother, Maggie Baird, herself an accomplished filmmaker. Baird was integral in providing the filmmakers with footage. “Maggie’s footage gave us another window into their lives which gave an even more intimate look into the family,” says Utz. “So, we could be in the kitchen with them when they’re arguing.”

With the wealth of footage, Utz’s first cut came in at 25 hours. “It was an embarrassment of riches,” says Utz. Editing 23 hours out of that cut was about finding the emotional arc of this performer in underground venues, following her through to the epic Grammy Awards performance.

Adds Utz: “One of the things that we discovered in the editing process was that, you know, the film starts a lot earlier. We ended up using a lot of that Maggie footage and the process of them writing the album. … The whole first act would be that material. It just became clear that we needed that setup, and we needed to get to know them. We needed to see their creative process to get the full arc of what she was going through.”