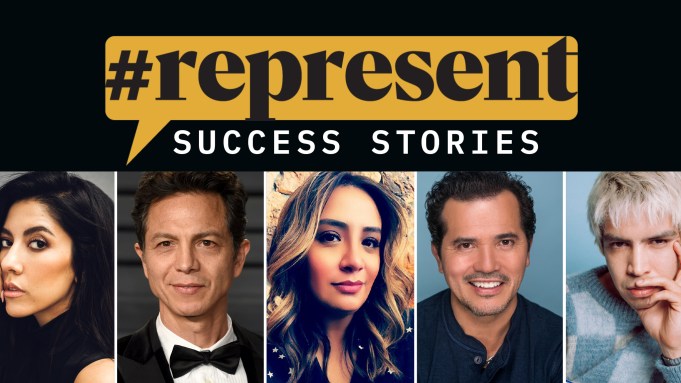 Even for celebrated Latinx performers like John Leguizamo, finding success in the entertainment industry is a hard-fought and seemingly never-ending battle. But as a newcomer to the business, Leguizamo recalls being galvanized by the struggle into telling his own stories.

“I just kept getting put into these really negative roles that I felt I was contributing to the downgrade of the Latinx image in the media,” he tells Variety. “I wanted to write my own stuff, so I could portray my people the way I saw them and felt them.” And that’s exactly what the Leguizamo did. His 1991 off-Broadway production of “Mambo Mouth” was a hit. Despite being forced to perform in the hallway of the theater, the show brought in big names including Arthur Miller, Al Pacino and John F. Kennedy Jr.

In honor of Hispanic Heritage Month, Variety brought together prominent Latinx creatives who have all had to carve their own path on the road of success in Hollywood. Cristela Alonzo, Benjamin Bratt, Stephanie Beatriz, Julio Torres and Leguizamo joined Variety’s film awards editor Clayton Davis for a “#Represent” roundtable discussion looking to learn what each individual’s definition of career prosperity is, and what that looks like moving forward for Latinx creators and artists in the future.

Torres, a former “Saturday Night Live” writer who has made both a comedy special and series with HBO, says he uses the word “success” very cautiously. “I have that immigrant thing where I feel like it can go away any second,” he explains. But he reveals that a highlight of his career, thus far, has been developing his standup special “My Favorite Shapes,” which prominently features a rotating selection of objects to which he has a special connection.

“One of my happiest moments was going to the warehouse where this conveyor belt was being made for this show. I thought like, ‘Oh my God, how’d I trick HBO into greenlighting this thing?’” he says. “I feel like I fooled enough people into investing in me.”

Alonzo first felt like a success when she signed a deal with ABC to develop her own show. “I was writing for other Latinos and I could actually control the authenticity,” she explains.

“Cristela” ran for one 22-episode season on the network between 2014 and 2015 before its cancellation. The show debuted alongside “Black-ish” and the now-canceled “Fresh Off the Boat” — both series that have accumulated well over 100 episodes to date. Making the case that representation must extend behind the scenes and into the executive suite, Alonzo says that “Fresh Off the Boat” and “Black-ish” had the benefit of having Black and Asian executives in their corners, something her show lacked.

“There were no Latino executives or anybody at that network [that worked on ‘Cristela’]. I had to fight with them all the time to explain my existence,” Alonzo says. “If my story didn’t fit their version of what Latino life is, it was inauthentic to them.”

Advocating for authenticity has long been a priority for the actor and comedian, who says her own creative ambitions were born out of a desire to push beyond stereotypes. Alonzo started doing stand-up comedy because she “wanted to write the words” she was going to say. “I was sick and tired of playing the maid… Every audition, the accent got thicker and thicker,” she recalls, adding that she even went so far as to refuse auditions for those roles, a move her agent advised against.

Leguizamo also found the live performance space more welcoming than film and TV, saying, “That’s why Lin-Manuel [Miranda] was able to do ‘Hamilton’… On Broadway and in Manhattan, it’s more of an empty shell. You just have to raise the money and have the script and people dig it,” he explains. “You can survive.”

For “Brooklyn Nine-Nine” star Beatriz, success meant being cast in the lead role of regional theater production of “Cat on a Hot Tin Roof.” “I felt like, ‘Oh, they’re starting to see what I already know exists… They see the world in which a woman that looks like this can also be that character.’”

Beatriz also revealed that her character Rosa Diaz on “Brooklyn Nine-Nine” was originally written as a hotheaded Irish redhead. “I came in and I did something different and they rewrote the part for me,” she says. After landing the role, Beatriz recalls hearing snide remarks about her casting from other actors who told her “I auditioned for that show but they did tell me they were going to go ethnic.” The comment sticks with Beatriz to this day. “That young woman might still think that way, or she might have shifted her way of looking at the world to hopefully understand that her point of view isn’t everyone’s point of view, and also to understand how bigoted and racist she really sounded in that moment,” she says.

The panel’s industry veteran Bratt says it felt like he “stepped off a platform and made it” when “Law & Order” was nominated for best drama series at the Golden Globes during his tenure on the show. Around that time, he started getting offered film roles and recalls a run-in at the award show where he was told that actor Karl Malden didn’t know who he was. “He said, ‘What the f— is Benjamin Bratt?’” The interaction left a lasting impression on Bratt who says that, despite being an actor for more than 30 years, “I’m still in the grind, man. I never really feel like I have arrived.”

A common refrain among the panelists is how the work being done by Black Lives Matter organizers helps Latinx people as well both on and off-screen. “Where would we be now, if it wasn’t for what Black Lives Matter did?” asks Leguizamo. “We really owe so much to them.”

“I’m not asking for more, I just want what’s mine,” he adds, taking a moment to make a righteous argument on behalf of American Latinx people. “If we’re 20% of the population and contributing $2.3 trillion to the GDP and we have $1.3 trillion of buying power and we’re 25% of the U.S. box office and our women are number one in small business creation and we save the housing market with 68%, then I want what’s mine. I don’t want what’s yours.”

And when it comes to effecting change in Hollywood, Beatriz stresses the necessary work of Black creatives, saying that Latinx people “have to collectively understand that Black storytellers and Black stories are vitally important… Once that sort of shifts and we see Black stories being told and celebrated and winning the awards that they deserve, I think everything else follows.”

Big picture questions that go beyond who is represented on-screen are top of mind for Torres. After teaming up with HBO to release both a comedy series and stand-up special, Torres found himself wondering if he was technically an employee of AT&T, the premium cable network’s parent company.

A “growing elephant in the room in Hollywood,” says Torres, is uncovering where money is going. “Who are the parent companies that own us?,” Torres asks. “What are they doing to that money and how do we make sure that our contributions are helping our audiences and not widening the wealth gap?”

Looking forward, what does success in the entertainment industry look like for the next generation of Latinx storytellers?

Beatriz and Bratt are optimistic about what’s to come.

“What’s exciting to me about what is happening and what will continue to happen is that we’re going to see more of each other and different kinds of Latinos on screen, big and small,” Beatriz says. “That to me is success – when someday, if I have a family and a kid that looks like me, she won’t ever be searching and scrolling like I did, watching Sesame Street until I was 13 years old because those are the Latinos that I knew on TV.”

Bratt adds: “I’m incredibly encouraged by the undeniable fact that as a culture, we’re nearly at a point of critical mass. Latino culture is going to be the majority.”

“I’m encouraged by the young people behind us who are passionate about the arts, passionate about their cultural representation, and not worried so much about – to use a turn of phrase that Eva Longoria was favored to use – hitting people over the head with a tortilla,” he concludes. “Just be who you are and be good and people will come.”