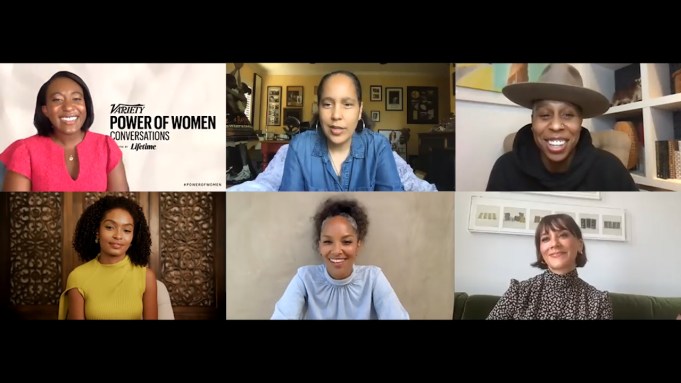 Before Lena Waithe was an Emmy-winning writer, an actor, a film and television producer with her own Hillman Grad banner or the creator of shows like “The Chi,” “Boomerang” and “Twenties,” she was a production assistant with big dreams.

But what set Waithe on the path to greatness was the fact that she began her career working under legendary Black women creatives like Mara Brock Akil and Gina Prince-Bythewood.

“The fact that I’m on a panel with two people I worked for at some point — I’m trying not to get emotional on here,” Waithe says of appearing with the pair as part of Variety’s Power of Women: Conversations, presented by Lifetime. “But it’s also a testament to them. How often can you say your boss eventually becomes a part of your tribe? … They’re a big reason why I’m sitting here now. So, this is like a full circle moment for me.”

Waithe first worked as a PA on the set of “Girlfriends” in the 2007-2008 season and Brock Akil says she immediately responded to Waithe’s go-getter attitude.

“I used to say, ‘Good ideas are from everyone. So, if you have a great idea, just share it,’” Brock Akil recalls. “Lena’s the PA — she’s supposed to be, like, sharpening the pencils, getting scripts [and instead], she’s like, ‘Uh huh, so what’s your order? But I’ve got this idea, Mara.’ [I’d respond], ‘Okay. Get the lunch then give me the idea.’ Her light shone bright from day one, so you knew she was special.”

So when her longtime friend Prince-Bythewood (the pair first met on the set of 1994’s “South Central”) was looking to fill an assistant position on 2008’s “The Secret Life of Bees,” she was quick to recommend Waithe. “You want to save the good ones, you want to keep elevating them and keep them working and keep them in the flow. And clearly she did a lot with her opportunity.”

Joining the #Represent: Black Female Creators virtual roundtable were Rashida Jones and Yara Shahidi, who share their own connections to the trio, meeting at various points in their careers. But beyond being accomplished actors, writers, directors and producers, the five women share something more important in common — their dedication to forming community and creating opportunities for more Black women to follow them.

In many ways, 2020 has been a banner year for all five women, with Waithe launching “Waithe Wednesdays” with both “Boomerang” and her newest series “Twenties” airing back to back on BET this season; Jones’ latest film “On the Rocks” garnering Oscar buzz; and Shahidi’s new 7th Sun productions signing an overall deal with ABC Studios. After getting her big break on “Black-ish,” Shahidi learned how much more influence she could have once she became a producer on “Grown-ish.”

“I was able to start to help form a writers’ room and help bring people into the door,” Shahidi says. “There’s another level of attentiveness that you can give to the production space, being like, ‘Oh, I get to help choose who goes from head writer to showrunner.’ I get to help form those kind of conversations and those dialogues. I get to talk about back-end points … and really talk about the distribution of ‘How do people benefit from shows such that they have the success to launch their next projects?’ That’s been such an exciting moment and I think it’s reflected in the work that everyone does here.”

Brock Akil and Prince-Bythewood have been putting in the work for decades, but they still created some of biggest headlines to date this year. Brock Akil inked a new overall deal with Netflix to create more content, just as the streamer’s Strong Black Lead division picked up the rights to her iconic shows “Girlfriends” and “The Game,” while Prince-Bythewood’s action film “The Old Guard” launched to the highest numbers of the streamer’s summer quarter, with 78 million people watching in its first four months.

“You can’t really wrap your head around that,” Prince-Bythewood says. “Especially given the journey of my career, and how every time I put a film out, I’ve been told that we’re not doing any promotion overseas or any distribution because people don’t want to see us [Black people] in any other country.”

But because Netflix launched “The Old Guard” in 190 countries, she explains, “Nile [the film’s protagonist, played by KiKi Layne], this young Black female, is out in the world, globally. The world gets to be inspired by her and that means a lot. That’s what I think all of us want, is for the world to see the breadth of our humanity and how dope we are. The more that we can have successes like this, it’s just going to help us as a people.”

Praising Prince-Bythewood for pushing to get out of that box and direct “The Old Guard,” Brock Akil adds, “One of the things our industry likes to do to anybody, but especially Black artists, is to box us into what we ‘can’ do. She made a concerted effort to say, ‘Hey, I’m going to enter into genre [filmmaking].’ I think it’s tied to wanting to tell stories that her sons would want to see. But the point is, she took that leap. And that’s also important, that this was strategic in her career plan.”

It’s certainly not been an easy road for any of the Black women assembled to navigate, with the group difficulties they’ve faced in finding the time and space to use their voice. Prince-Bythewood reflected on her battle to tell Black women’s stories, from her first film, 2000’s “Love & Basketball,” through her work today.

“For me, one of the most damaging things that Hollywood has done is not just the images that it has put out — and it’s been so limiting because so few of us have gotten that opportunity to be in the position to create content and create characters — but it’s absolutely the erasure of Black women,” Prince-Bythewood says, explaining how the famous Malcolm X quote about how “the most disrespected person in America” applies to the industry.

“Our images, and the lack of our images in the world, you see the repercussions of that in the way that Black women are treated in this country, in the world. You would never think that there was a definitive decision to do that. Yet, in our positions [within the industry], and I know I came up against it in such a stark way, and you start to understand how that happens and why it’s so important that we are in the positions that we are in.”

Prince-Bythewood goes on to explain that she ran into roadblocks while making “The Old Guard”: “There was a force that was aggressively trying to diminish Nile’s character, the Black female hero in the film, and it was a constant drum of notes of cutting her moments, cutting her dialogue, cutting her heroism.”

“It got so overwhelming that I finally had to sit down some of my producers and I gave them a speech about everything — how neglected [Black women] are, the invisibility, how damaging it is to Black women, and how offensive these notes are to me,” she continues. “I said, ‘I need you guys to feel that same offense. And I need you guys to stand up and fight for Black women and fight for this character.’ There’s a reason that I’m in this [director’s] chair and there’s a reason why more of us should be in this chair, too. Because when this stuff was happening, if I was not here … Nile would not be the hero that she is. And the fact that we’re in this position and also up for that fight, we have to be up for that fight to protect our women on screen, because it leads to protecting us in the world. And thankfully they heard me and the nonsense stopped.”

But the work goes beyond simply having Black characters on screen. Another fight the creators are facing is the opportunity to share a wider array of Black experiences. Reflecting on the internet debate over Jones and Kenya Barris’ series “#BlackAF,” Waithe says, “I really dug that show and I love the sort of storm it sort of caused in social media and with audiences I think pushed some buttons because it challenged people about what Blackness is, and how do we define it, and us being forced to redefine Blackness for ourselves.”

Jones agrees, saying, “People always use that phrase ‘Representation matters’ and you don’t really talk about what that really means. And representation is not like, ‘Let’s just make sure that Black people look this particular way,’ in an outward-facing way. ‘And let’s not get into all the other stuff, because we want to make sure the representation is really positive or it’s really aspirational or really inspirational.'”

“That is a huge mistake because our growth as a community is so dependent on filling in every single possible degree in the spectrum, so that when you’re talking about a Black experience, you can’t decide that ‘This is the Black experience, that’s the Black experience,'” Jones says, speaking to the power of a show like “#BlackAF.” “Forget about the quality of content, if you have a show on the air that’s about a morally compromised, rich, Black family, that is just as important as somebody who’s fighting for justice and is uplifting her community, because we’re filling in the whole spectrum so that people can’t decide anything about Black people as a whole.”

Shahidi is also embracing her power to inspire the next generation by remaining thoughtful as she makes her next moves, like signing on to play Tinkerbell in Disney’s upcoming live-action remake of “Peter Pan.”

“It’s pretty surreal,” Shahidi says of taking on the role and what it means to have a young Black woman play the part. “It’s not a matter of popping me in as Tinker Bell, but [in making the movie] with a newer diverse cast, it was really a matter of knowing that we’d be aligned, not just in my character, but me asking, ‘Well, what’s the indigenous representation on this? What are the repercussions of that?’ I’m grateful to be a part of a project where it feels like we have aligned on more than just this character, but with the potential of the movie in its entirety.”

Waithe has seen the power of imagery firsthand, with characters like Queen Latifah’s Cleo in “Set It Off” inspiring her as a young person. And now that she has the power, she can make sure intersectionality is also part of the conversation.

“I’m not just Black, but I’m also a gay Black person, and I also happen to be a woman. I want to embrace all those things about who I am, I don’t want to quiet any of it down,” she explains. “It’s important that people see us and they recognize us, because you know us — we’re your cousins, we’re your neighbors, we’re your kids, or your coworkers.”

“I don’t think that’s my only role [as a creator] and I don’t want to be limited to that, because I can write other things and I’m challenging myself right now to write other characters that aren’t just gay and Black and women,” she adds. “But it is important to me to make sure those images exist out in the world.”