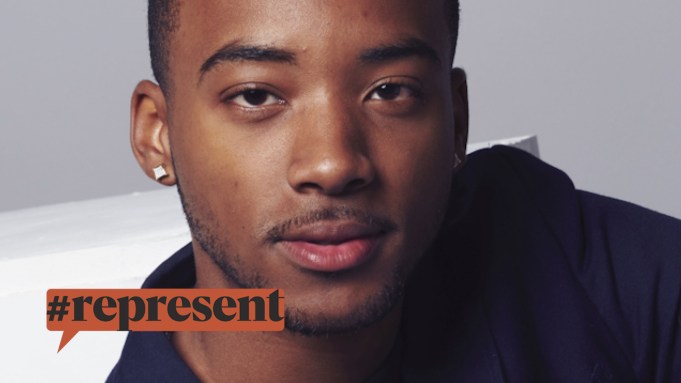 During the early days of Black Lives Matter protests, Algee Smith took to Instagram Live to express his feelings about the state of the world in the wake of George Floyd’s death. He shared the emotional toll of acting in films that portray police brutality, saying that he no longer wanted to take on those robes but instead roles that are “edifying a Black man.”

“I was obviously in a very emotional place. However, it was a very honest place,” Smith says during Variety’s #Represent: Black Men in Hollywood roundtable. “I feel like I’ve played so many roles where I’ve either died as a young Black teenager or where it’s been something that hasn’t been edifying a Black teenager or a Black man at all. And so, I was like, for myself, I’m tired of playing those roles and I said ‘I’m done with it.’”

At just 25-years-old, Smith has already taken on that emotional burden twice. In 2017’s “Detroit,” Smith played Larry Reed, who endured a nightmarish experience of police abuse in a 1967 incident at the Algiers Motel. In 2018’s “The Hate U Give,” Smith took on the role of Khalil, whose murder by a police officer during a traffic stop galvanizes the story’s plot.

Though Smith doesn’t have a completely negative view of those roles, that didn’t make it easier to portray those experiences onscreen.

“It’s not cool on set either, when you’re hearing all types of things and you can’t sleep,” Smith recalls, describing the emotional weight of the experience. “I had to take Ambien while I was shooting ‘Detroit’ because I couldn’t sleep, because you’re hearing that [abuse] 12 hours a day, and then you’re just yelling and crying. But you do it for a reason. That’s why we are actors, that’s why we put ourselves in that position, to feel for people.”

Smith shared his thought process during an intimate conversation with fellow actors Aldis Hodge (“City on a Hill”), Chris Chalk (“Perry Mason”), Derek Luke (“13 Reasons Why”) and Jay Pharoah (“Saturday Night Live,” “Bad Hair”). The virtual roundtable is the second installment of Variety’s “#Represent” series, dedicated to the intersection of race, culture and Hollywood. And in sharing his experience, Smith learned he wasn’t alone in questioning what roles he should be playing. In fact, the whole group have found themselves worrying about typecasting or fearing playing into Hollywood stereotypes at one time or another during their careers.

“It’s very tough because you’ve got to trust the process, you’ve got to trust the project. But is this project going to serve, to elevate, the perception of my culture? Or does it serve the detriment of my culture? That is a responsibility that we carry, and it’s often the risk we take, as entertainers, giving our portrayals,” Hodge said. “What most people don’t get is that they don’t see that, of the very specific roles that you’ve chosen, are probably about 80 and 90% of the roles that you had passed your way to get to those roles, were trash, trash, trash, trash.”

Smith — who is also known for his work on HBO’s “Euphoria” and playing Ralph Tresvant in “The New Edition Story” — went on to explain that he’s been doing a great deal of introspection during the coronavirus shutdown about the art he hopes to create moving forward.

“When 2020 started, there was some weird energy going on that I felt, but when coronavirus happened, I kind of got angry. I got a little bit upset because I had a lot of things that I was working on that just stopped,” Smith says. “And I had to step back and look at it, and understand that, from my perspective, I think this [moment] is spiritual. And not just with coronavirus but also with what’s going on with Black Lives [Matter] and what’s going on with Black people, with our experience being felt by the world.”