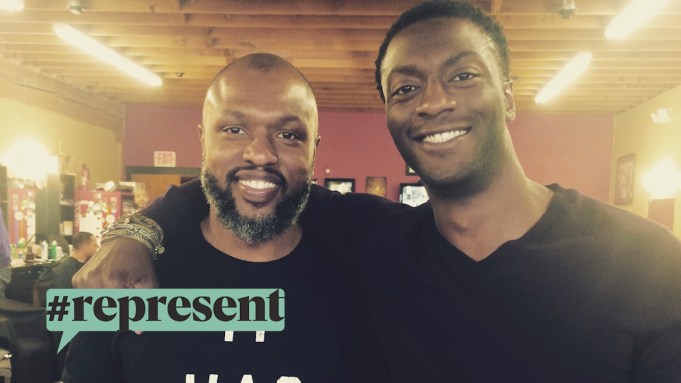 As Hollywood takes stock of the best ways to diversify its ranks, Chris Chalk implores the industry not to forget the hair and makeup trailer. The need for more diversity in the hair and makeup department is often discussed when Black women like Gabrielle Union, Yvette Nicole Brown or Nia Long speak out about their experiences in the industry, but the struggles extend to the men in Hollywood too.

“There is such a disregard of Black men’s hair. I think they know they be messing up Black women’s hair,” Chalk says during the Variety “#Represent: Black Men in Hollywood” roundtable. “I think they look at that and go, ‘Ah!’ But us? They literally think, ‘Oh, I did it!’”

The “Perry Mason” actor recalls being upgraded to series regular status on a television project, and heading into the hair and makeup trailer for the first time.

“Homegirl, this white lady, she tapped my head,” Chalk says. “She tapped it, sprayed some water, didn’t brush it, didn’t comb it and left. And I was like, ‘Oh wild!’ And then that happened to the point where my wife started cutting my hair [because] I didn’t want to be rich and buy a barber, like I should have.“

“But then the next season — to speak to the good of that show — the producers said, ‘Hey, is there anything you would like to address?’ I said, ‘Yeah! Your hair is hella racist, bro! Just so you should know. I’m not mad yet, but like that s— is hella racist!’”

Discomfort in the hair and makeup trailer is a feeling each of the actors gathered for the candid discussion — Aldis Hodge (“City on a Hill”), Derek Luke (“13 Reasons Why”), Jay Pharoah (“Saturday Night Live,” “Bad Hair”) and Algee Smith (“Euphoria”) — say they have experienced to some extent during their careers. And because it’s such a common experience, Hodge says that getting more diversity into the hair and makeup trailer is just as important as hiring Black writers to bring Black stories to the screen.

“When you go into the hair and makeup trailer with somebody who has never done or touched a Black head before and they don’t know how to handle your hair, because it is a different texture, different grade,” he continues. “And then you got to sit there for hours, [with] somebody playing in your hair and making you look all the way jacked up, and then you got to go on set, worrying about how you’re looking, or a makeup artist does your makeup, [and] your face is different than the rest of your body, mentally, what does that do to somebody who’s trying to do their job? For us, these are our essential workers. My barber, Art Williams, is essential.”

And it’s not just about the struggle to get proper haircuts, Luke notes the financial burden of having to pay for a separate barber, as well as the question of having the hair and makeup department supervise the barber’s work on the actor’s hair and beard for continuity purposes.

“I had to pay for the barber, because when barbers come to see you at the hotel [on location], it’s a different price than going [to them],” Luke explains, sharing another wrinkle. “That’s a whole thing too, about barbers and how you sneak them in the union. And what credit they get when they’re on set. And it’s such a secret mission to get a barber on set and then they can cut inside your [personal] trailer. But if it ain’t good light in your trailer, even though they got skills, it’s suspect.”

Hodge says he’s also struggled to help get his barber into the union so he can cut hair on set. In fact, he recalls that for one job, he would drive to get his hair cut twice a week before heading to work, while his white cast mates were taken care of on set.

“The bigger picture, it’s walking into an environment that 99 percent [of the people there] doesn’t represent or look like you,” Hodge says. “You’re doing your job to the best of your ability, because you have given consideration. Now, where is that same consideration for you? Why are the tools needed, the assets needed, required for you to do your best work not provided?”

He continues: “And when you walk into a situation where it just smacks of the fact that you’re not considered, it is spiritually and emotionally taxing. Because hair and makeup is not the only area where it is majorly lacking when it comes to going to work every single day to do a job that you love to do, working in an environment that is constantly reminding you that you’re not as important as everyone else there, only because you’re Black. And we’ve got to walk with that for the rest of the world.”