Why ‘Outlander’ Actors ‘Fought’ for the Brianna-Marsali Friendship 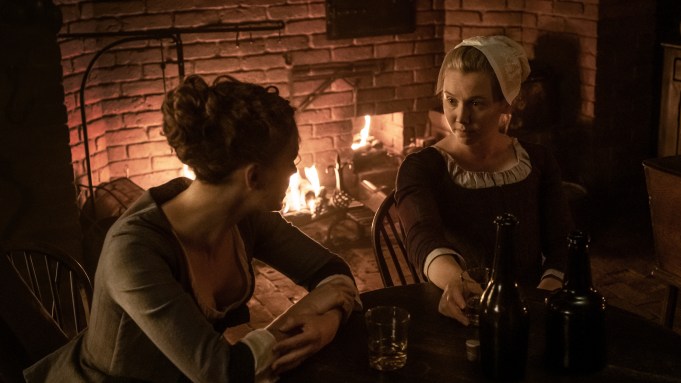 SPOILER ALERT: Do not read if you have not yet watched the fourth episode of Season 5 of “Outlander,” entitled “The Company We Keep.”

This season on “Outlander,” while Jamie (Sam Heughan), Claire (Caitriona Balfe) and Roger (Richard Rankin) have been off forming a militia to fight the Regulators’ uprising, a new friendship has been forming back on Fraser’s Ridge between Brianna (Sophie Skelton) and Marsali (Lauren Lyle).

In the fifth episode of Season 5, entitled “The Company We Keep,” Brianna became increasingly scared about Jemmy’s safety after they returned from a trip into town and she found a coin in his bassinet. Mrs. Bug (Sarah Collier) informed Bree that it was some nice Irish man who said Jemmy was “very handsome,” but Bree knew immediately it had to have been Stephen Bonnet (Ed Speleers), whom she is worried might try to have a part in Jemmy’s life.

That night, when Brianna couldn’t find Jemmy — who had crawled away and hidden in a cupboard — she ran around in a panic, yelling his name, convinced Bonnet had kidnapped him. After the babies were in bed, Marsali poured Bree a drink and comforted her, starting the beginning of a friendship that isn’t in Diana Gabaldon’s book series.

But the Brianna-Marsali relationship wasn’t always going to be a friendship. The producers and writers were very torn about whether to have Bree and Marsali be friends or adversaries.

“[Bree’s] relationship with Marsali, we talked about it — would it be fraught? Would they like each other or would they be at odds?” executive producer Maril Davis tells Variety. “And we kind of went the path of then bonding together. They’re in similar positions and those two actresses have such great chemistry on screen. I’m thrilled with what Lauren did this season, she’s been amazing and it just gets better.”

Skelton tells Variety that she and Lyle fought to have Brianna and Marsali become friends because on a “female-led show” like “Outlander,” women should be supporting each other.

“I think originally the writers wanted there to be more animosity between them and we really fought against it,” Skelton says. “It’s like, c’mon, it’s a female-led show, let’s show that women can support each other and get along. So we really fought for them to be bonding as sisters. I love the scene where Marsali calms Bree’s fears about [her rapist Stephen Bonnet]. It’s a lovely moment, a nice quiet moment, getting two women from completely different time periods coming together in this really simple conversation. I like that relationship.”

She adds that it’s “fun to get to explore the different dynamics with the characters” that don’t usually interact because when Skelton and Rankin first joined the show, they “didn’t work with anyone.”

“It always felt like we were in a different show,” she says.

Rankin echoes Skelton’s sentiments and says that for Roger, he is getting the same kind of new relationship this season that Bree and Marsali are getting, but for him, it’s with Fergus (Cesar Domboy). He reveals that Roger and Fergus find themselves “in a few scrapes” together in Season 5 and it really helps to expand the season beyond the Claire-Jamie storylines.

“These characters have been there previously, but you get to see a lot of new relationships, like Brianna and Marsali, like Roger and Fergus. You know the characters already, but you don’t know those relationships, and I think that’s something that expands the season,” says Rankin. “It happens throughout the season and it keeps it fresh, keeps it new. It’s an interesting new dynamic in the season and really opens things up and gets at real life.”

The actors also teased that further on in the season there’s a scene featuring Brianna, Roger, Marsali and Fergus all together, something that was a first for the actors.

“We were quite taken aback that in all these years, we’ve never had a scene all together and it was lovely,” says Skelton. “You forget that they are related. It’s nice for them to all be together.”

Davis adds that the producers and writers love to see “unexpected friendships” between characters. She also says that they “wish they had time to do more of these things” because “it’s a nice surprise when there’s something that wasn’t in the books. It adds a whole new surprise element for book readers.”