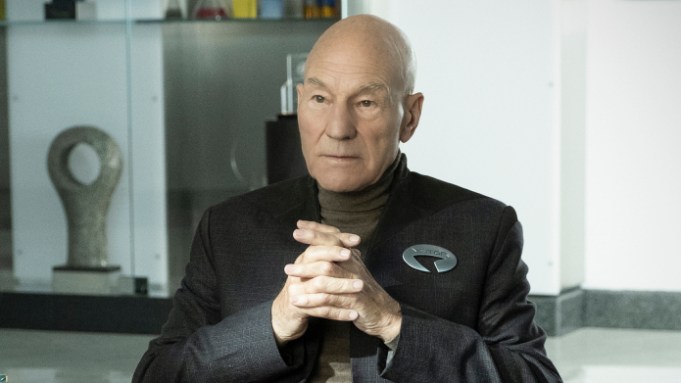 “Star Trek: Picard,” the latest entry in an ever-regenerating franchise, eventually gets going. That it does so more tentatively than boldly may, at first, be a test of individual viewers’ loyalty to the “Trek” universe and to its most famous captain.

“Picard’s” great asset is its title character — as played by Sir Patrick Stewart, who, at 79, seems somehow yet more in command of his craft as an actor even as his character has ceded command of the Enterprise. Living in oblivion as a retiree, Picard is called back toward duty by the sudden appearance of Dahj (Isa Briones), who seems connected in some way to old “Trek” pal Data (Brent Spiner, who makes an appearance in a dream sequence).

Untangling aspects of her identity, with the help of an expert doctor (Alison Pill), occurs relatively fleetly; getting Picard out of his retirement vineyard villa into the heart of the action occurs only after significant stutter-stepping of the plot. (The third episode, the final one sent to critics, concludes where one might have assumed the first would have, were this series not planted amidst the sprawl-friendly terrain of a streaming service.)

Stewart helps sell the story’s indecision and bagginess — haunted by memories of career-ending catastrophe, his elder Picard is, if not content in isolation, then unsure he deserves anything besides it. But while propulsiveness is not the only virtue for a story, viewers could be forgiven for wondering, as the early episodes crawl on, why the show around Jean-Luc Picard feels inflected less with his burgeoning faith in himself than with risk-averse crawl.

Unlike “Star Trek: Discovery” — the installment in Gene Roddenberry’s fantasy universe that preceded “Picard” to air on CBS All Access — this new show is leveraging one of the franchise’s most major assets. It’s one thing to set forth on a wholly new adventure within the “Trek” universe and quite another to put an iconic character back on the board. (If “Picard” doesn’t succeed creatively, the character is burnt, at least for a while.)

Maybe that’s why the series seems, at first, so tentative. But it moves within three hours to a place that promises as much excitement and movement as there already has been insight into its beaten-down protagonist, a show that suggests it’ll be worth sticking around for.