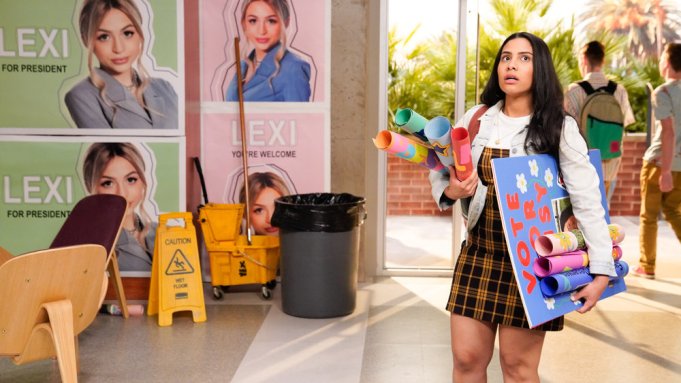 The thing about going back to high school is that it’s never the same as you remember. Nor should it be, given the amount of personal growth and development you’ve hopefully had in the years since graduation. Taper your expectations though, and taking a stroll down memory lane can leave you embracing the fond memories you experienced while recognizing all the ways in which you now, perhaps, know better.

That appears to have been Peacock’s strategy in reviving “Saved by the Bell,” the 1990s-era teen comedy where problems could be solved in 22 minutes, high school archetypes were readily available, and the kids had unwieldly power over bumbling authority figures. Was the original show fun escapism on a Saturday morning for the kids of its generation? For sure. But throwing a little lip gloss onto the nostalgia and repackaging that bubble gum history for a new generation without embracing cultural changes would have guaranteed another out-of-touch, face-palming reboot.

All of which is to say this class of “Saved by the Bell” is a pleasant surprise. Showrunner Tracey Wigfield’s experience with skewering meta commentary on series like “30 Rock” and “Great News” comes into play here. She and her team of writers masterfully weave all the best parts of the original into this new iteration, while calling out the ways in which the first show’s foundation was cracked.

The series opens with a faux ad from one Zack Morris (Mark-Paul Gosselaar), who became the governor of California through his usual antics. He’s now staring down a $10 billion mistake that has shut down low-income schools across the state, and to easily rectify yet another problem he transfers all affected students to well-funded schools. Schools like Bayside High, where his son Mac Morris (Mitchell Hoog) also happens to be enrolled.

At the famed high school the show could have easily centered Mac as the new, entitled protagonist — one who floods the gym, fights over the best parking spots with his frenemy, cheerleader Lexi (Josie Totah), and makes life hard for yet another authority figure who would prefer to be your best friend, Principal Toddman (John Michael Higgins). But the real central figure here is Daisy (Haskiri Velazquez), a transfer student with big ambitions who is paired with Mac on the first day of this new school experiment.

It’s from her vantage point that viewers take a “time out” to follow these new teen stories, which include student elections, missing iPads, and planning a school dance. Those plots are universal to be sure, and while the main problems are still solved for a blue-sky happy ending by the time the credits roll, the writing digs deeper to explore themes of class and privilege. Along the way it also turns traditional character tropes on their head—the stacked athlete is actually terrible at football, the presumed jock has theatrical aspirations, the new QB is not who you’d expect.

Capturing those stories with authenticity and heart is a brilliant young cast that also includes Dexter Darden as the tough-to-crack Devante, Alycia Pascual-Pena as Daisy’s BFF Aisha, and Belmont Cameli as Jamie Spano, the son of Jessie Spano (Elizabeth Berkley). Together they find a way to coexist and learn from each other (the blue skies of it all), while also reminding viewers that high school can be more than a place of cliques and clichés. In this post-“Glee” TV world kindness and understanding are valued virtues, and inclusivity is expected. Case in point is the multifaceted trans character Lexi, whose history is explained but never told through the filtered lens of trans struggle. It’s a significant portrayal that pushes the conversation beyond gender identity, made even more relevant by the fact that behind-the-scenes Totah—a transgender actor—is also a producer.

Bridging those conversations are returning characters, whose appearances in the continuation are essential in capturing the nostalgia but also integral in exposing some of the original series’ problematic takes. Jessie Spano, who is now a counselor, managed to leave high school and find success, but is back as the voice of reason to many of Principal Toddman’s questionable tactics. Her former flame A.C. Slater (Mario Lopez) also returns, although as the school’s gym teacher he never really left. In a sense, his lack of ambition and inability to shed his jock persona make him the new Screech of the crew. He fills that cartoonish comedic relief role in earnest, which makes it a fun take. More importantly, he also steps in for the show’s (welcome) absence of a “nerd” character. Gosselaar (one of the show’s executive producers) and Tiffani Thiessen also appear throughout in guest-starring roles.

As a whole, the show is a nuanced and self-deprecating take with signature fast-paced storytelling and many, many homages (watch for Zack’s famous phone in the premiere) to satiate new and returning viewers alike. At first glance Bayside High seems to be the same old stomping grounds full of comfort fare and zany plots, but stick around after that bell rings and it seems like this time “Saved by the Bell” might actually know better after all.

“Saved by the Bell” drops its 10-episode season Nov. 25 on Peacock.