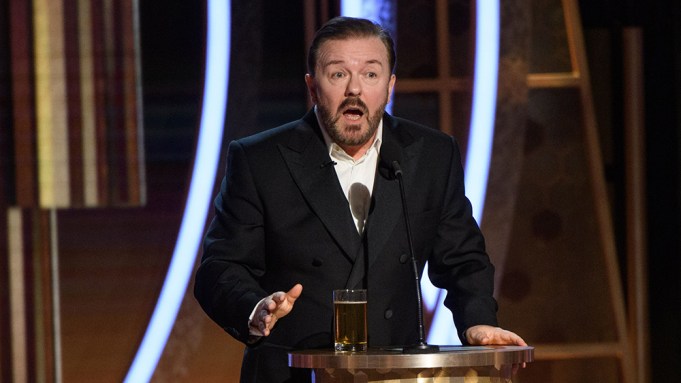 Opening the Golden Globes, host Ricky Gervais, claiming it was to be his last outing, made a point of emphasizing just how little he cared about the show. Perhaps he was the only one.

What has traditionally been a shaggy and loose awards ceremony — cramming stars into the Beverly Hilton’s tight ballroom, then serving generous Champagne pours just ahead of their speeches — felt more grown-up than usual in its 2020 outing. Part of that, perhaps, was the energy lent by a particularly tense and contentious year only five days old: Winners including Michelle Williams (“Fosse/Verdon”) and Patricia Arquette (“The Act”) dedicated their time to urging political action at the polls, with Williams placing special emphasis on a woman’s right to choose. Even a star as breezily above-it-all as Brad Pitt (picking up a prize for “Once Upon a Time in Hollywood”) seemed compelled to say something, even if his California-casual brand does not exactly meet the moment. Re-entering his speech after seeming to feint offstage, Pitt told the audience, “If you see an opportunity to be kind to someone tomorrow, take it. I think we all need it.”

With that in mind, let’s say that Pitt was making his best attempt at addressing a time during which it seems perhaps surreal to be honoring actors. (Previously in the evening, presenter Cate Blanchett and winner Russell Crowe addressed the catastrophic wildfires sweeping Australia; Crowe, who sent his speech to be read in absentia, was at home attempting to guard family and property.) And let’s stipulate that Pitt’s self-deprecating comment about not bringing his mother to the ceremony so as to avoid dating rumors was cute and canny both, and that the cutaway — tastefully just-long-enough, and not a close-up — to Jennifer Aniston chuckling in the audience was elegantly done, and didn’t risk such a thing as bad taste.

But bad taste was at times what a viewer craved — as much a corrective to bad times, in the form of escapism, as is activism-from-the-podium, and likely more effective in the moment. The Globes were addicted enough to narrative, for instance, to nominate Aniston for the more-discussed-than-loved “The Morning Show,” but not tasteless enough to award her over a prestige actress like “The Crown’s” Olivia Colman. (Indeed, they tasked Aniston with reading Crowe’s message about climate change, an uneasy fit at the very start of the evening.) The Globes could have elegantly elided 95% of the unfortunate presenter banter, but gave us the one train-wreck moment (Ansel Elgort deciding to sing his introduction of the Original Song category a cappella and absent melody) to remind us how fun it used to be when the show used to go off the rails. They booked Gervais, a host who couldn’t stop talking about how over the show he was, just before delivering a focused, careful excoriation of newcomers to the entertainment space like Apple, whose “sweatshops in China” Gervais claimed were at odds with its stars’ progressive values. And worse still, they gave us a reaction shot of Apple CEO Tim Cook when his company was mentioned, but not a second one after the sweatshop gag.

When did the Golden Globes become a show that made the viewer feel vaguely guilty for wanting cataclysm? Its reputation, perhaps, was always a bit inflated on the basis of a few instances of ragged speeches and stars caught in the bathroom, but the ceremony had, historically, felt like a respite from the awards season’s particular gravity. Inasmuch as a show more professionally produced than ever before can be said to have been a victim, the Globes may be a victim of its own success. A show that has captured a large audience on the strength of its positioning as “fun,” kind of can’t be that when it’s a more-scrutinized-than-ever trial run for movie actors on their path to Oscar and a platform demanding something more than burbled thanks to agents. Notably, even the most old-school, off-the-rails speech of the evening, Joaquin Phoenix’s “Joker”-esque acceptance of laurels for “Joker,” got tangled up not in ego — well, not strictly — but in social responsibility, thanking the Golden Globes for going meat-free and urging fellow stars to swear off private jets.

That’s a worthy goal. But expressed as such, it tended to make subtext text — addressing the room exclusively in a way other winners had been doing more subtly all along. Taking on politics in an awards-ceremony speech has value in the form of pure uplift, and Williams and Arquette have become modern masters of the form. But if the other half of Gervais’ Apple joke — that stars shouldn’t bother addressing politics in their speech because they’re part of an inherently corrupt system — was jaded and ungenerous, maybe he was on to something in that the direct consequence of such speechifying was likelier to be a boost for whatever reputation a star had already been grooming among their peers than action on the ground. (Will any Globes viewer vote in 11 months because of Williams’ speech, good as it was? We know precious few of them will quit using the private jets they didn’t have in the first place.)

All of which is a crazy thing to ponder after the Golden Globes — a ceremony that, even when its attendees declared mutiny two years ago and wore all-black in a post-Weinstein funeral for old mores, managed to generate viral moments! (That ceremony, by contrast, was structured around organized protest that risked losing face and presenting stars in a literally unflattering light.) Gervais, perpetually more shrewd than funny, seemed to suss that out, making a Weinstein crack as he introduced the night’s last presenter, Sandra Bullock. The audience all laughed. It felt right: The evening’s final outrage was professionalized, risk-free and taken in the pleasant spirit in which it was intended.