Continue to Variety SKIP AD
You will be redirected back to your article in seconds
Nov 5, 2020 7:00pm PT 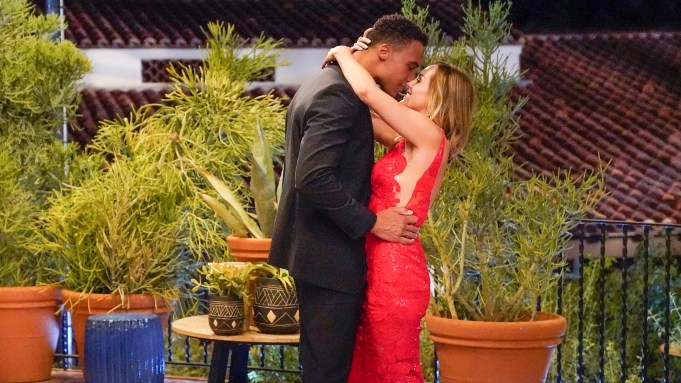 SPOILER ALERT: Do not read if you have not yet watched the Nov. 5 episode of “The Bachelorette.”

On the heels of last week’s episode, no one was happy in “The Bachelorette” bubble. The contestants hosted a group roast and titular Bachelorette Clare Crawley responded by interrogating each contestant about frontrunner Dale Moss. She ultimately did not give out a group date rose.

The men started to revolt, all feeling “discouraged” after the interaction. Even host Chris Harrison noticed, and confronted Clare about the situation.

“The path we’re on right now… we can’t continue,” he told her. “These are good guys and they’re not dumb — they know what’s going on.”

Clare began to articulate her commitment to Dale, even admitting that she reviewed his social media presence before the show taped — but swore that they never interacted via text or direct message. Throughout the conversation, it became clear that there were no other candidates in her group of Bachelors that could compare.

“What do we do?” she asked. “I don’t want to disrespect these guys or waste their time.”

Her solution was to solidify her relationship with Dale. She canceled the rose ceremony and sent Harrison to pull him aside for continued time together. Their evening consisted of a dinner and concert (featuring “The Bachelor: Listen to Your Heart” winners Chris Watson and Bri Stauss), and deep conversations about their families, past and future.

While Clare struggled with the idea that her feelings wouldn’t be reciprocated, she ultimately decided to pursue the relationship and continued with the overnight portion of the date. After they had spent the night together, Clare was sold. A conversation with Harrison sealed the deal: Clare would leave her season and would no longer pursue the other men.

She said goodbye to her men as a group. “What I came here for … I think I found. And it’s with Dale,” she said.

She apologized if she wasted their time, and wished them all the same happiness that she found. While the overwhelming response was support, the men were hurt and concerned — especially contestants Blake Moynes and Jason Foster.

Harrison filled in Dale in on the day’s events — that Clare broke up with her men and was ready for a proposal. (In fact, Chris Harrison FaceTimed franchise-jeweler Neil Lane to secure a ring.) Outside, the other contestants were discussing Clare and her “rip, roar, ready for a wedding” attitude. Their assessment was accurate: Dale got down on one knee, and Clare accepted his proposal.

The romantic setting of the proposal was juxtaposed with confused men left without a lead at the resort. Each man mourned their relationship with Clare and waited to hear news on their futures. Sure enough, they would be getting a new Bachelorette. While all had the decision whether to stay or leave, each man decided to meet the new Bachelorette.

Former contestant Tayshia Adams emerged out of the limo as the new Season 16 lead. Tayshia, long-rumored to replace Clare, was first introduced to Bachelor nation during Colton Underwood’s season of “The Bachelor.” After being eliminated in his final three, she went on to find love during season six of “Bachelor in Paradise” with fan-favorite John Paul Jones. The two split in October 2019, just a month after the finale.

“Surprise!” she said, as she met Harrison out of the limo.

But the episode concluded with a “To be continued…” before she could meet her suitors.