Ryan Murphy had a very specific look in mind for Lucia State Hospital, a mental institution that’s at the center of his new Netflix series, “Ratched” (premiering Sept. 18), a “One Flew Over the Cuckoo’s Nest” prequel and origin story for Nurse Ratched (Sarah Paulson) that takes place in 1947.

“He wanted the hospital not to seem like a hospital, but to be a very glamorous hotel that had been converted into a hospital,” says Oscar- and Emmy-nominated production designer Judy Becker, who has also worked with Murphy on “Feud: Bette and Joan,” “American Crime Story” and “Pose.” “The kind of hotel that movie stars used to go to. He wanted the series to take place in Northern California, so he wanted a lot of wood elements. That was my directive.”

They settled on Arrowhead Springs Resort in San Bernardino, Calif., an hour outside Los Angeles. “You’re driving up this mountain road, and you don’t see anything, but then suddenly in the distance this giant white hotel appears,” Becker recalls of her first visit to the hotel. “It was stunning — like a magic castle.”

Paul R. Williams and Gordon B. Kaufmann designed the 69-room hotel in 1940. Decorated by Dorothy Draper, Time magazine described the property at the time of its opening as “late Californian with a Southern Georgian trace.”

Sadly, the current owners wouldn’t allow “Ratched” to film on location. Instead, much of the hotel was re-created to scale on the Fox lot in Hollywood with “little tweaks.”

The centerpiece of the hospital is the large office of Dr. Hanover (Jon Jon Briones), the head of the institute, whose questionable treatments include lobotomies and scalding-hot hydrotherapy. The streamline moderne office features 20-foot floor-to-ceiling curved windows (a nod to solariums and the popular belief during that era that spending time in the sun could treat a variety of ailments) with partially sheer blue curtains, a shiny wood desk accented with brass lamps on either side, a custom bar, several seating areas with sleek chairs upholstered in blue and green fabric, blue grass-cloth wallcoverings, modern gold chandeliers and burgundy carpeting. “It’s like he’s a studio boss, and there’s the abuse of power,” Becker says. “He’s gotten this position, and now this is his kingdom.”

Many of the hospital rooms were named after the vintage wallpaper in them — Trellis, Ivy and Vine — but Becker also pays homage to Cape Cod, where Murphy has a home in Provincetown. The floral names on the dummy doors lining the hallways were inspired by the series of 22 identical cottages that line Route 6A on the Cape; they’re known as the flower cottages because each is named after a flower. “I never know if viewers will notice these little secret touches, but they are one of my favorite parts of designing,” Becker says.

As Nurse Ratched manipulates her way into becoming an integral part of running the hospital, she lives at a nearby motel. They filmed the exterior at Big Sur’s Lucia Lodge, which sits 300 feet above the Pacific Ocean coastline. The wood-paneled and dimly lit rooms, built on a soundstage, provided a deep contrast to Ratched’s richly colored wardrobe of jewel tones, screen siren red lipstick and perfectly coiffed hair. “The motel is a little bit representative of what’s going on inside of Ratched,” Becker says. 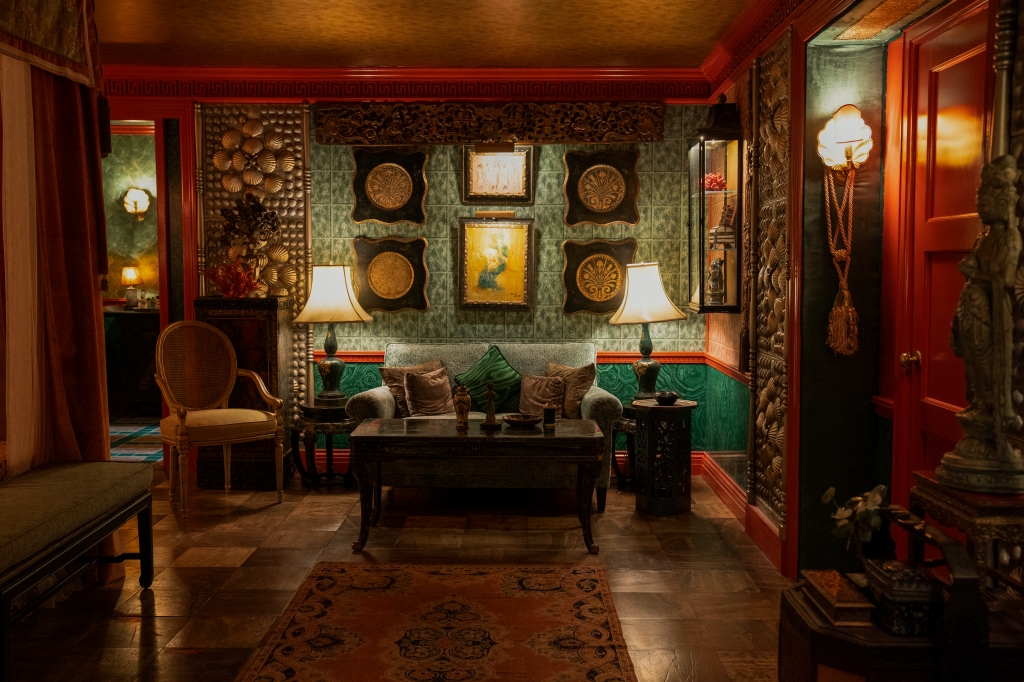 While most of the show’s interior locations were built on set, the home of Lenore Osgood (Sharon Stone) didn’t require nearly as much effort. Osgood is an eccentric, wealthy widow whose son was once under the care of Dr. Hanover.

Yet, Becker did have some trouble finding the right house. “It was originally written as sort of a grander empty Moroccan-style palace,” Becker recalls. “I thought we would find that easily in L.A., but we didn’t find anything great.”

Then she started thinking about the home of Tony Duquette, the late Hollywood production, costume, interior and jewelry designer whose colorful aesthetic followed the mantra of more is more. “Sharon lives next door to his house [known as Dawnridge, the building still houses the offices of the Duquette design firm] in Beverly Hills, and she suggested it to Ryan,” Becker says. “Lenore Osgood fits in it so perfectly. We had to do some set dressing, but mainly we had to undress it because it was so packed full of stuff and we wouldn’t be able to fit the cameras in there.”

The hospital prison, which houses a convicted killer (Finn Wittrock) who savagely stabbed several priests to death, was shot on location in downtown Los Angeles. “It’s the basement of what used to be the Dutch Chocolate Shop,” Becker says. “It has these tiled arched ceilings with the original [Batchelder] tile. We custom-built the prison walls and iron gates.”

Becker placed an empty wine rack at the back of the prison. “Because we imagined that the hospital was a former hotel,” she says, “we assumed the basement would have once been the wine cellar.”