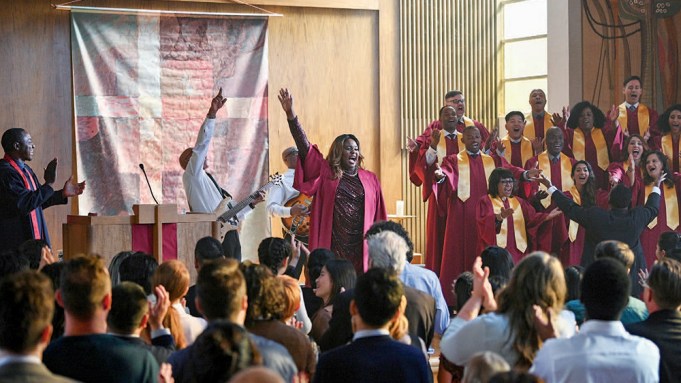 For NBC musical “Zoey’s Extraordinary Playlist,” about a tech worker in San Francisco who can hear people’s thoughts — but only as musical numbers — choreographer Mandy Moore (“La La Land,” “Dancing With the Stars”) also turned into a performer.

“I made a video of myself dancing in our room and sent it off,” Moore says, as part of the casting for the number “This Little Light of Mine” in the episode “Zoey’s Extraordinary Neighbor.” She hired the choir for the piece in Vancouver, where the show was shot, but had to go a step further to line up dancers, aiming for different shapes, sizes and ages to establish authenticity. Anyone who auditioned would have to learn the steps, shoot a video and send the tape back to Moore.

A chance meeting with showrunner Austin Winsberg put the series on Moore’s radar. One reason she was attracted to the show was that it uses different places and people. For instance, she says the work on “This Little Light of Mine” was “interesting because you couldn’t just hire a choir.”

Whether she’s choreographing a number with Zoey (played by Jane Levy) and Mitch (Peter Gallagher) or assembling an ensemble piece, her process is the same — and almost journalistic. “It’s about the who, what, where and when,” says Moore.

The key to the work is collaboration. She confabs with musicians, directors, writers and the actors to make the dance numbers pop. Part of her process is going to a location to map things out with the show’s production designers, Charles M. Lagola, Rusty Smith and Peter Ochotta, to understand the spatiality she has to work with. “A lot of times I’ll want a person to walk over something or stand on something, and [the designers] will build what they need to,” explains Moore. “Other times, they’ll say, ‘I can’t do that,’ and then I have to shift my world.”

Typically, Moore begins work on a number as soon as she gets the script. “Austin had me involved early on,” she says. That helps her begin to develop structure. “I have to sit with something for a while to understand how I want it to feel,” she explains.

If she’s not doing a number in a church, she’s in a coffee shop having actors up on tables being careful not to tip over the mugs. Moore choreographed “I Wanna Dance With Somebody,” giving the song a new meaning as barista Autumn (Stephanie Styles) expresses her loneliness to Zoey. “I had never thought of the song that way,” Moore says. “It was so much fun to do.”

Adding to the challenge is the quick turnaround. Moore explains there isn’t much time to put together the final performance — “This Little Light of Mine” involved a three-hour rehearsal the night before and then a 90-minute run-through with music so the actors could learn the lip-sync.

As for inspiration on future numbers, she says the possibilities are endless: “AC/DC, Def Leppard. Can you imagine ‘Pour Some Sugar on Me’?” She laughs, saying that the writers and Winsberg love all types of music. So anything is possible when the show resumes production.