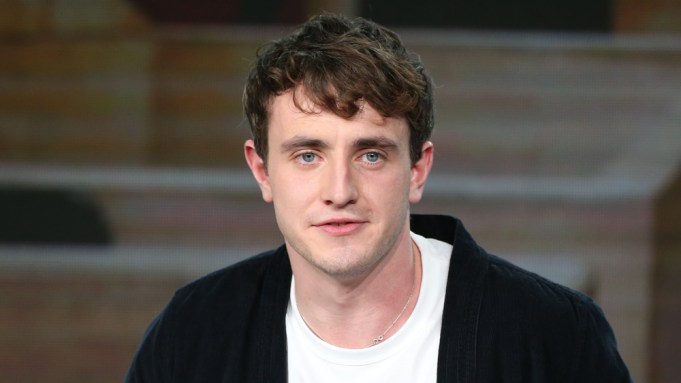 Paul Mescal isn’t sure what he’ll wear to the virtual Emmys.

“I’m definitely going to be informal on the bottom — not that anyone is ever going to see it,” the “Normal People” star says on Thursday’s episode of Variety and iHeart’s podcast The Big Ticket from his home in London.

Mescal is up for an Emmy for his work as Connell in the Hulu coming-of-age drama. Until the show came along, his only other on-screen credit was for a comedy series called “Bump” that’s never been released.

When the nominations were announced he couldn’t get in touch with his mother, who was so nervous that she went for a walk on the beach.

“I was trying to voice call everybody on a WhatsApp group, but nobody was picking up,’ Mescal recalls. “I think they were all kind of scared. When I got everybody on the call, it was pretty amazing. My brother who never cries was crying.”

He and Jackman became pals over email when the “Greatest Showman” actor sent Mescal a message after first watching “Normal People.”

“He sent a gorgeous email again when we were nominated,” Mescal says. “I think the only disappointment is that I won’t get to see him at the ceremony. I just hope there’s some kind of Zoom [waiting room] and I could talk to him there.”

While Mescal celebrates his nomination and the three others the show received, he says he’s surprised that the television academy didn’t recognize his co-star Daisy Edgar-Jones. “It’s disappointing because I would love to have shared that with her,” he says.

If his Emmy nomination wasn’t enough for Mescal to soak in, there’s also the Rolling Stones. He stars in the band’s music video for “Scarlet.” In fact, he’s the only person in the video, which shows him trashing a hotel room and dancing by himself throughout Claridge’s in London. (The production followed strict COVID safety guidelines.) The request came through his agents.

“They had sent me the breakdown and were like, ‘It’s a Rolling Stones music video. What do you think?’” Mescal recalls. “I was like, ‘Is there a conversation to be had here?’”

You can listen to the full interview with Mescal above. You can also find “The Big Ticket” at iHeartRadio or wherever you listen to your favorite podcasts.