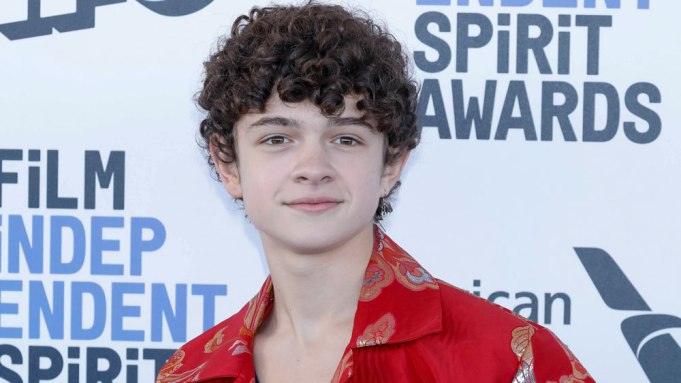 Noah Jupe is only 15 years old, but he’s already racked up an impressive list of acting credits, including “The Night Manager,” “Suburbicon,” “Ford V Ferrari” and the upcoming sequel to “A Quiet Place.”

It was his work in last year’s “Honey Boy” that solidified his standing not as someone to watch, like so many young Hollywood hopefuls, but someone who has already arrived.

Now, the Brit actor is back on the small screen playing Nicole Kidman and Hugh Grant’s son in “The Undoing,” the David E. Kelley-created and Susanne Bier-directed six-episode series about a New York City therapist (Kidman) whose life unravels when her doctor husband (Grant) is charged with a gruesome murder. “The Undoing” premieres on HBO on Oct. 25.

“The first time I met [Kidman and Grant] was at the read-through,” Jupe says on Tuesday’s episode of the Variety and iHeart podcast “The Big Ticket.” “It was pretty cool because sometimes you have sets where you just kind of get on…and you just kind of start working, start rehearsing. But Susanne really wanted to get everyone together in a room and read through the whole thing.”

It was the first time the cast had read the script for the final episode. “That was pretty insane,” Jupe says. The last episode is being kept so secret that HBO has only allowed media to watch the first five, refusing to screen the finale until closer to its Nov. 29 air date.

Variety caught up with Jupe over Zoom from Detroit, where he’s been shooting Steven Soderbergh’s ensemble “No Sudden Move” for about two months. He was getting ready to return to London. “I’m excited to get back home and see my friends and chill out for Christmas,” he says.

What has it been like shooting a film during the pandemic?

It’s so interesting. Obviously, I’ve met loads of new people on this job but I only know half their face. I went to lunch with the person that does my hair and I saw him take off his mask and he looks so different without his mask. It’s so weird. And the mask is so irritating, man. I’m kind of lucky as an actor because obviously once I’m on set, I’m allowed to take it off. You see everyone else, all of the crew, and they’re having to wear that all day, but everyone’s been proper troopers with the whole PPA thing.

Did you have to get tested for COVID all the time?

I’ve had a lot of sticks shoved down my throat. It’s not fun, but you’ve gotta do what you’d gotta do.

Now, let’s talk about it being in a Steven Soderbergh movie.

He’s awesome. Before shooting, he called me just to check in. We had a two-hour chat… He’s such a wise man. I definitely would call him a genius in what he does and in lots of other things.

What was the hardest scene for you to shoot for “The Undoing”?

It was probably something in episode six, but I’m not going to say that one. There was a scene where I had to play the violin and I had learned the violin… I worked hard and I could hold a tune on a violin. I got to set and it was the first time I had told everyone, “I can play the violin now.” And they were like, “Whoa, sick.” I picked up the violin and I was like getting ready and they were like, “Action!” And I was playing and it sounded horrible. I mean like horrible, like just everything was wrong. It turns out that the violin was out of tune. I didn’t know how to tune it and I didn’t test it beforehand.

Your world is not like most 15-year-old’s worlds. How are you keeping level-headed? Anytime I saw you on the red carpet, you were cool and collected.

Damn, I ain’t feeling that when I’m on the red carpet [laughs], but I’m glad I looked like that. You could get lost in this industry. It’s a very easy place to just get lost in and enveloped by. For me, it’s kind of keeping those close, close friends, close family and having a place to go back to where you can talk to people and you’re not going to have to worry about it getting out somewhere or someone videoing you. You have people that you can trust because there’s a lot of people out there who look like you can trust them and they’ll ruin your career in a day and it’s happened to a lot of people and you’ve got to be wary of that.

So are you more of an actor who wants “Star Wars” or do you want Marvel? Do you want to be a superhero or do you…?

Neither. Neither. I want, like, “Fargo.” I want “Magnolia.” I want “The Deer Hunter.” I want that s—. I love Marvel. I love “Star Wars.” Great movies, but not for me as an actor. I always say if I’m going to be in a movie like that, I have to be a villain and I have to die. I’ll be in a Marvel movie if that’s the case.

What have you been bingeing during quarantine?

I tried to start bingeing “South Park,” but I’ve got a long way to go. I’ve been binging a lot of classic movies because my mom’s kind of said, “You can watch pretty much anything now.” There are so many movies that I was wishing that I could see but my mom was like, “No.” So finally I’ve been able to watch them. I’ve gotten to the age now where I can respect my craft and respect movie making. When I was a kid, movies affected me, but I couldn’t respect them as movies necessarily because I just didn’t know enough about them. Now I can see how they impact me. I can talk about them properly without sounding like a complete fool.

So what’s the latest one you watched that just blew your mind?

“The Deer Hunter” was one. Every time I asked my mom, “What’s your favorite movie?” She always says “The Deer Hunter” and I’m like, “I want to see that one.” She’s like, “No, you’re not watching that one.” This time, she was like, “How about we watch ‘The Deer Hunter?’” So we watched that and when my mom turned the TV off, I just started sobbing, and it went on for like 20 minutes. It just had such a huge impact on me.

This interview has been edited and condensed. You can listen to the full interview with Jupe above. You can also find “The Big Ticket” at iHeartRadio or wherever you listen to your favorite podcasts.