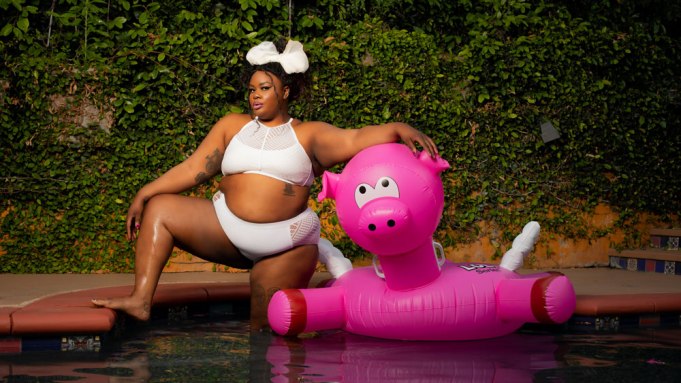 Nicole Byer has made history by becoming the first Black woman to be nominated for an Emmy for outstanding host for a reality or competition program for her work on the fourth season of Netflix’s amateur bake-off series “Nailed It!” “People sometimes go, ‘It’s very humbling,’ but I’m like humbling means you’re smaller than you are. … This is affirming,” the 33-year-old comedian says on Thursday’s episode of the Variety and iHeart podcast “The Big Ticket.” “I feel delightful, and I love screaming around my house, ‘I am an Emmy nominee!’”

Even so, she’s not preparing an acceptance speech anytime soon. “I will lose to RuPaul, and I’m fine with that,” says Byer, who co-hosts multiple podcasts, including “Drag Her!,” a podcast about “RuPaul’s Drag Race.” (In June, she also released her first book, “#VERYFAT #VERYBRAVE: The Fat Girl’s Guide to Being #Brave and Not a Dejected, Melancholy, Down-in-the-Dumps Weeping Fat Girl in a Bikini.”)

Although there will be no red carpet to walk at the Emmys on Sept. 20 — the ceremony will be held virtually — Byer is still looking for something to wear. “I think I might do multiple costume changes. I might get on my roller skates for a little bit,” she says. “Just because we’re inside and it’s not the most appealing thing to go to the Zoom Emmys, I’m going to make the Zoom Emmys the most fun thing I’ve ever been to.”

What are you doing during quarantine besides podcasting?

I’ve been pole dancing, which is something I’ve been doing for two years in September. That’s my pole-aversary. And then I started a skate gang with some of my dear friends. I made them buy roller skates and we skate around and we pretend to be threatening, and we’re always like, “Wait until you get our skates off and we’ll come for you.” We’re all in various sorts of falling down.

What did they tell you when you first went in to audition for “Nailed It!”?

I didn’t audition. She’s offer only! I’m kidding. I am absolutely not offer only. I audition for so much. I just put myself on tape for something the other day. But I had a meeting with the production company Magical Elves — and truly what a magical way to get a job is, by meeting with someone, and then they actually hire you. I’ve had so many meetings where I see the movie later and I’m like, “Oh, so they went in a different direction.” But I met with the production company, and I don’t know who, but somebody had seen me perform, and they said that they liked my style of comedy and that they were looking for a comedian because they did want the show to be funny, but they didn’t want it to be mean funny. I was like, “Well, I’m not an insult comic. I don’t have that in me. But I do think I can call out the reality of the situation.”

Who is your dream guest judge?

I would love Beyoncé. Somebody has to go to school with Blue Ivy, in the production or at Netflix, that can be like, “Blue, do you watch ‘Nailed It!’?” And she’s like, “Yes, I do.” And then we bring Beyoncé, we bring Jay, we bring Blue, and we have the whole beautiful family. Rumi and Sir, they can come too. Maybe Kelly comes, and then maybe Miss Tina comes. Miss Tina’s very funny. I want the whole clan. I love them.

You’re assuming Blue Ivy goes to school just like everybody else.

I don’t think she’s homeschooled. Do you? Maybe. She might be. I don’t know. I can’t fathom the richness of that life. Do you know what I’m saying? To me, she goes to a store, they call ahead to Target.

When do you start shooting Season 5?

It is a joke, and I refuse to change it. It made you laugh, so it’s doing its job.

When did you know you were funny?

My grandmother is from Barbados and so my dad was born in Barbados. I’m first generation. And my grandmother says things that aren’t American. So if I made her laugh, she would always go, “Oh, you tickle me,” and that made me laugh that she was so “tickled” by me. So I would make it a point to try to get my grandmother to say that every time I saw her, and then that evolved to other people. So when I was in school, if I could get someone to laugh, that felt good. And then when I finally got on stage and started performing, I was like, “Ah, not only does it feel good to make other people laugh, but I feel good and I feel powerful because I can control how this group of people feels for the hour and a half, two hours they’re with me.”

Do you miss touring your standup during all of this craziness?

I miss performing so much. In 2019, my goal was to get an hour of material together that I love, that is cohesive, that is just a graduation of my half hour that’s on Netflix. I was literally on tour almost every week. I think I was gone maybe 40 weeks out of the year, 30 weeks out of the year. It was something crazy. And then when I wasn’t touring, I was working and it was just this really hectic lifestyle that I grew to love. And this year I was like, “I need a little bit of a break.” And the world said, “I hear you loud and clear, you dumb bitch. Here’s a big break.”

Having modeled your collection of bikinis in your book, when are you starting your own line?

Honestly, hopefully soon. I’m in the midst of trying to figure out how to do that. I would love that very much because I love bikinis. I have so many. I have over 100, and I understand what my body type would like. And I hope that that translates for other body types. I want women to just embrace the body that they have.

This interview has been edited and condensed. You can listen to it in its entirety above. Wait till you hear Byer recall her first auditions and the time she was flown to Romania to shoot an Israeli commercial for Nestle.

You can also find “The Big Ticket” at iHeartRadio or wherever you listen to your favorite podcasts.