Listen: Miley Cyrus on ‘Black Mirror,’ Getting Sober and Her Love of Britney Spears 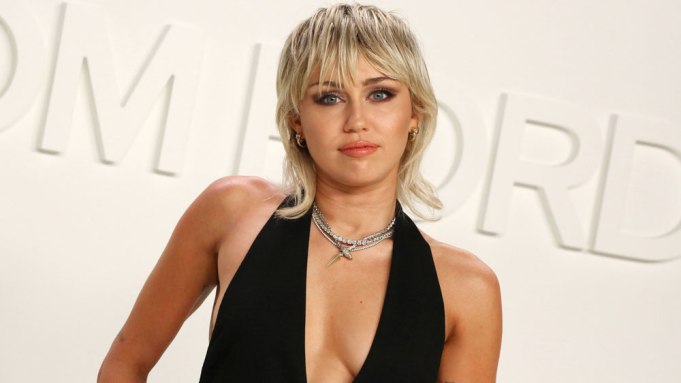 Miley Cyrus was one of the first celebrities to adapt to the new COVID-19 world order. Not long after stay-at-home rules were implemented, the singer-actor launched “Bright Minded,” a talk show on Instagram Live with a guest list that has included Elton John, Demi Lovato, Kerry Washington and Selena Gomez. “I loved how there was really no pressure. It was like, if the show went over, if the show had some tech problems, it was just about doing it for the love of it,” she says on Tuesday’s episode of the Variety and iHeart podcast “The Big Ticket.”

Before the pandemic, the former “Hannah Montana” star dipped back into acting with a starring role in an episode of the Netflix anthology series “Black Mirror.” She plays Ashley O, a seemingly happy pop star who wants to move on from her controlling manager, her aunt Catherine (Susan Pourfar). When her aunt slips her too many pills, Ashley falls into a coma, but a fan (Angourie Rice) helps her wake up and break free. Cyrus is being submitted for Emmy consideration in the guest actress in a drama series category.

Variety caught up with Cyrus over Zoom from her Los Angeles-area home.

Hi Miley! So happy to see you!

I put on a white button-down twice in my entire life. Once for this and once for when I interviewed Sen. Elizabeth Warren. And in the past four months I think I’ve washed my hair twice. Once for you and once for Sir Elton John.

What did you think when you first read the “Black Mirror” script?

There were some obvious similarities through the character that I’ve played before that actually really became my life, like her wanting to explore rock ’n’ roll and change genres. That’s something that, right after “Hannah Montana,” was really important to me. The main difference to me is I don’t have an Aunt Catherine. My mom has been my momager. I’m almost freaking 30, and I don’t buy a lightbulb for my house without asking my mom if it’s the right one. Without my parents I bet my life would’ve been more similar to the Ashley O story. The thing that really makes me different than Ashley are my parents and the team that my parents put around me. Like when I was looking for a manager, we got whoever Dolly (Parton) told me would be protective over me. It didn’t have to do with, “he’s going to make you star.” It was, “you’re going to feel comfortable with your child traveling with him and he’s going to take care of her and respect [your] values.”

Tell me about performing as Ashley and putting that wig on.

We shot in South Africa. I really enjoyed my time. I’ve made records and traveled all around the world, but I got to spend about a month there and record in the studios and I got to work with some choreographers I maybe wouldn’t have worked with before. It was just a really cool experience, being so isolated from my family and friends. I was able to really disconnect from myself, and I was really able to get into Ashley. When Ashley wakes up from the coma and it’s totally traumatic, that was the day that I had lost my house in Malibu to the fires. I was able to pull from that trauma and use that in the scene. There were times that I had to stop and just go outside and totally melt down. It was just a really interesting time for me because so much was falling apart in my personal life, and it was the same thing that was happening in Ashley’s life. It gave me a lot to use.

Who were some of your Ashleys when you were growing up? Whose posters did you have on your wall?

I had the most weird hodgepodge of Britney Spears, ’NSync, Metallica and Hilary [Duff.] I had Joan Jett and Pat Benatar. You should’ve seen my face when Britney covered “I Love Rock ’n’ Roll” in “Crossroads.” I melted down. That scene was the father, the son and the Holy Spirit all in one room. I actually lost my mind. That was worlds colliding beyond what I could have ever dreamed of.

You and Justin Bieber had a chat in your Instagram comments about an Ashley and Justin collaboration. When is that going to happen?

Man, I think we could come up with something very, very, very special. As of now, nothing is in the works, but I remember I was sitting in front of him at his movie premiere. I was 16, something like that. He leaned up to me and asked for advice in a very mellow, friendly way. I said, “Just try to remember everything, try to press record in your brain and remember everything because there are so many moments of my life when my mom will be like, ‘do you remember when you got to perform for the queen?’ And I’m like, ‘no.’ ” There was so much going, so much to take in as such a young person that I didn’t remember to take everything in. That’s something my dad always taught me, was when you’re on stage, whether it’s when you get there or when you’re about to leave, take a picture in your mind. And remember it, and savor it, and take it in.

Do you ever look back at some of the things you’ve done and say, “What was I thinking?”

One of my favorite interviews is when I say, “Anyone that smokes weed is a dummy.” That one I love to send to my parents, who are big stoners, every now and then. It’s been really important for me over the last year living a sober lifestyle, because I really wanted to polish up my craft. I had really big vocal surgery in November. I had freaking four weeks where I wasn’t allowed to talk. I was so ripped writing on the whiteboard, yelling at everybody [Laughs]. I had this one big bicep from just yelling at mom and still trying to do meetings. But it prepared me for the stillness and the quietness.

What was the surgery for?

My doctor looked at my vocal cords, and he said, “No one shy ever has to get this surgery. This is from over- use of the vocal cords.” It’s no surprise that I would have this. I’ve been touring since I was 12 years old, but it’s not even the touring that’s the hard part. It’s you end up staying up late and meet-and-greets and things like that. And obviously I just talk a s— ton.

You mentioned living a sober life. Are you sober sober?

I’ve been sober sober for the past six months. At the beginning, it was just about this vocal surgery. … But I had been thinking a lot about my mother. My mom was adopted, and I inherited some of the feelings she had, the abandonment feelings and wanting to prove that you’re wanted and valuable. My dad’s parents divorced when he was 3, so my dad raised himself. I did a lot of family history, which has a lot of addiction and mental health challenges. So just going through that and asking, “Why am I the way that I am?” By understanding the past, we understand the present and the future much more clearly. I think therapy is great.

That’s great. I’m celebrating my sober birthday on July 7. It will be seven years.

“Black Mirror” is available on Netflix.

This interview has been edited and condensed. Hear the full interview above. You can also listen to “The Big Ticket” at iHeartRadio or wherever you find your favorite podcasts.