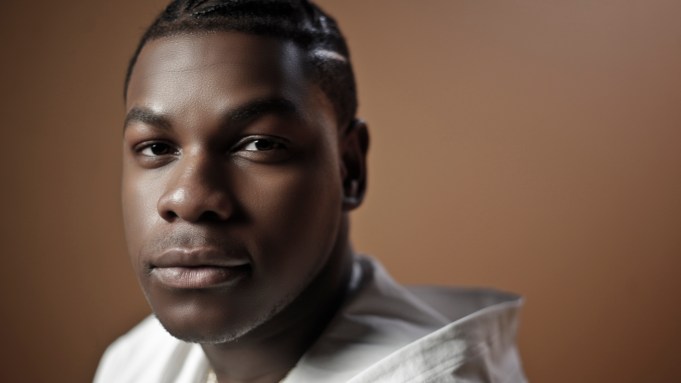 “He’s a scientist, a father, a community man and a husband who decides to join the police force in order to motivate change,” Boyega says on this week’s episode of the Variety and iHeart podcast “The Big Ticket” from his home in London. “This is essentially a character study into a man who goes through a system that wasn’t ready for him. A system that is so hard to navigate, a role that requires a lot of emotional restraint, because he tries to join the police force during a time when race relations is pretty intense.”

A scene showing Logan’s father being beaten by cops plays out in “Small Axe” as if it were ripped from the George Floyd headlines. But it wasn’t — the series was shot about a year before Floyd’s murder. “When myself and Steve were making this, we had no pandemic. George Floyd was still alive,” Boyega says. “Although there were these ongoing issues, the intensity that we’re experiencing this year, it hadn’t reached to that point. As far as I was concerned we were still living our free liberal lives. But boy, did that bloody freaking change under our feet.”

Soon after Black Lives Matter protests sprang up around the world, the “Star Wars” star made headlines for not only marching but also speaking at a demonstration in London in June.

“I need you to understand how painful it is to be reminded every day that your race means nothing,” Boyega shouted through a megaphone to cheers from the crowd. “And that isn’t the case anymore. That is never the case anymore…We are a physical representation of our support for George Floyd.”

What was it like meeting Leroy for the first time?

It was brilliant. What’s great about Leroy is his stomping ground is where I grew up. I definitely think I’m part of the generation that benefited from a lot of his work in the community, especially youth groups. When we met, I was actually with a friend that recognized him. He was like, “He used to be my mentor growing up.” When we spoke, I asked about his decision-making, why he decided to join the police force at that time and try to instigate change. It was great to understand his mind and understand the way he thinks.

What was it like shooting the scene when Leroy goes to the hospital and sees how badly his father has been beaten?

It’s funny you mention that scene because that day was a really special day because I don’t know what was going on in my real life or whatever, but sometimes you’re filming these scenes and you can’t motivate a natural performance because you’re tired. It was one of those days. I was like, “Steve, I just feel like I’m not getting it.” He emptied out the set, told the crews to go off on a break, and he told us a very personal story that he had no business telling us. He told us this story, and that really got my head into the zone. After he told the story, he rushed outside, and he got the crew to run back and was like, “Now’s the time to get it,” and that’s the scene that you see. It was birthed from Steve sharing a part of his truth with us and us implementing that into this moment in which Leroy for the first time sees his dad reduced to a man who is just swollen and unrecognizable.

I remember thinking at one point that you probably shot it after George Floyd.

Everyone thought that. It’s like, “Nah, don’t look at us, bro. The world is messed up. They’re still doing the same things.” When Steve brought us to set, he brought it back to the responsibility of artistry. It’s like, you work in this industry, you’re getting jobs, you’re producing and it’s all great, but he brought it back to the natural thing that we have to reflect
our perspective, the world and the way in which we see it through our own creative niche.

When you participated in Black Lives Matter demonstrations, did you get a lot of pushback from people?

All the people around me definitely worried about safety, exposure in that way, are you going to offend anybody. That’s the natural kind of reaction. But I was definitely supported by those who have always supported me, like Jordan Peele and J.J. Abrams. What’s great about those guys is they’ve always been supporting me. Myself and Jordan had a sit down a year ago. J.J. and I speak on a regular basis. But you don’t go through the process thinking everything is going to be fine. You don’t do that. You worry and it’s natural to the situation, especially when you see what has happened to others with much less of a voice, unfortunately.

I do have to ask you about the “Star Wars” joke in “Small Axe.” When Leroy tells a friend that he’s joining the force, the friend asks if he’s becoming a Jedi. Was that really in the script?

It was in the script. I did think to myself, “As a professional actor are you supposed to say, ‘Let’s not reference this’?” But if Steve was good with it, I’m good with it.