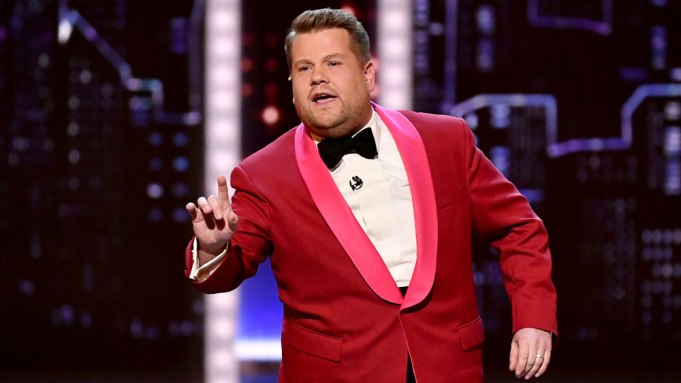 James Corden may be back to shooting “The Late Late Show” in his Los Angeles studio, but he insists that he’s not thinking about resuming production of “Carpool Karaoke” any time soon.

“I love that segment. I’m incredibly proud of everything it’s done for our show, but it would just feel like an odd thing to do it now,” Corden says on Tuesday’s episode of the Variety and iHeart podcast “The Big Ticket.” “It’s got such joyful abandon that it would feel strange in a way to do it right now. And there’s the level of safety precautions we have to take every day and things like that.”

One of Corden’s two Emmy nominations this year is for his “Carpool Karaoke: The Series” on Apple TV Plus. The other is for his work hosting the Tonys.

Corden says the fate of Broadway weighs heavily on him since the industry came to halt in the wake of the pandemic.

“It’s genuinely keeping me up at night,” the 42-year-old late night talk show host and actor says. “I worry about the theater. I worry about the bounce-back that I hope it can have and when that can happen and how it can happen and if it can. It does play on my mind greatly. My entire career started with doing musicals in the West End or plays at the National Theatre that I was very fortunate that they would come to New York.”

Corden points out how Netflix donated $675,000 in July to a fund set up by Sam Mendes, the Society of London Theatre and U.K. Theatre for stage workers across the pond. He thinks more companies should follow their lead. “I do think it would be great if the companies that are in one respect benefiting from COVID — if you look at price shares [of] streamers and all those things — I think some acknowledgement of the volume of arts and artists that have come from that environment, I think it would be really in their best interests to try and support theater in that way, the Amazons and the Apples.”

A member of Corden’s staff’s husband died of COVID and a close friend spent three weeks on a ventilator before making a recovery. With all that is going on in the pandemic-stricken world, is it even possible to celebrate the Emmys while remaining respectful of the times?

Yes, to a certain degree, says Corden. “It’s lovely to be recognized. It’s wonderful,” he explains. “But at the same time, I don’t think anybody wants to go to anybody’s Emmy nominee party, particularly not now.”

Corden will next be seen in the movie musical “The Prom,” Ryan Murphy’s adaptation for Netflix based on the Broadway show of the same name. He stars alongside Meryl Streep, Nicole Kidman, Kerry Washington and Andrew Rannells. “It was without question the most joyful time of my working life,” he says. “Any day you get to go to work with Meryl Streep is the best day of your life. That’s just a fact.

“Nothing would give me more pleasure than to tell you that she’s awful because like she needs any more praise,” he jokes. “It’s just incredible. It’s intoxicating being in her company because she is a constant reminder of what’s important in life and particularly as performer, that you should take what you’re doing incredibly seriously, and you should never take yourself seriously for a second.”

You can listen to the full interview with Corden above. You can also find “The Big Ticket” at iHeartRadio or wherever you listen to your favorite podcasts.