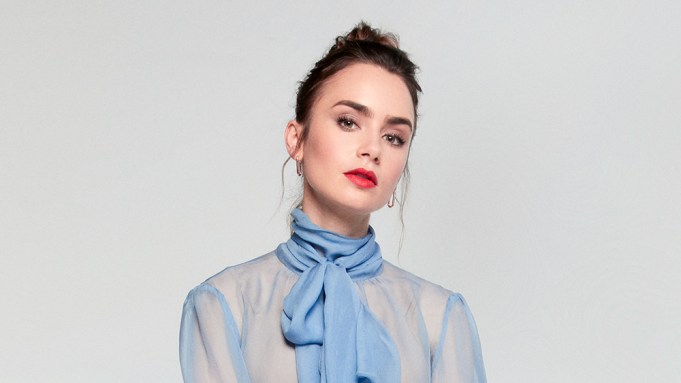 Before the world went into lockdown, when Americans were free to travel internationally, Lily Collins was crisscrossing continents. The Golden Globe-nominated actor was shooting her new Netflix series “Emily in Paris” in the City of Lights, as well as working in Los Angeles on David Fincher’s “Mank” — a drama about the making of “Citizen Kane.”

In “Emily,” premiering on Netflix on Oct. 2, she stars as the title character, a young fashion marketing exec who is transferred from Chicago to Paris, where she doesn’t know anyone and can’t speak French. Slowly, she finds new friends and, of course, romance.

“You can see it in the first episode that Emily doesn’t have to change who she is in order to be ultimately embraced and understood,” Collins, 31, says on Thursday’s episode of the Variety and iHeart podcast
“The Big Ticket.” “She’s obvious; she’s loud in her fashion and in her facial expressions. She’s very much set in who she is, but she’s also willing to embrace change and new ideas and new people and learn about herself — and also in turn, teach other people. We didn’t have this transformation scene where she goes into a dressing room as Emily from America and comes out as Parisian Emily, and people are like, ‘Oh, now we understand you.’”

The 10-episode series is from “Sex and the City” creator Darren Star, with a fabulous wardrobe by “SATC” costume designer Patricia Field.

Is “Emily in Paris” considered “Sex and the City” for a new generation?

We really wanted to make sure that Emily was not a new Carrie. We wanted Emily to be Emily and stand alone. But I also feel, and Darren agrees, that I think Emily grew up watching “Sex and the City.” I think she loved Carrie Bradshaw. I think she loved Audrey Hepburn. I think she read all the pages of Glamour and Vogue and Elle and all those magazines. I think that probably Carrie was one of those inspirations to her, as were all the other women in that show.

I hope it stands alone and has its own moment, but at the same time, it would be a shame not to have paid a little tribute to the characters that I think she grew up loving. And there are a few Easter eggs here and there that Patricia threw in as odes to “Sex and the City.”

If the show gets picked up for a second season, Carrie can make a cameo.

I would love that. I feel like maybe that needs to happen. I might tell Darren about that. She could be like an apparition. Emily walks by, and there’s a reflection in a window, and she looks in, but she sees Carrie. Then it goes back and it’s her, and she’s like, “What?” I think that’d be kind of great.

What was your favorite “Emily in Paris” outfit?

My favorite outfit is paired with a favorite memory of “Oh, my God, I can’t believe I’m here.” It was the Paris Opera house scene where it was an ode to Audrey Hepburn. I was in a black gown with my hair [pulled back] and wearing a tiara. They closed down the Paris Opera, and I’m running around and up the stairs looking at the stage, and I’m dressed the way that I’m dressed, and I’m going, “This is surreal. This is crazy that I get to do this and I get to do it dressed like this.”

Emily is plucked from Chicago, plunked down in Paris, doesn’t know anyone, doesn’t know the language. Is that something you could relate to?

I was born in England, and I moved here right before I turned 6. [Her dad is musician Phil Collins; her mom is West Hollywood antiques dealer Jill Collins.] And although a child experience is very different than an adult, I did feel very much like a fish out of water when I walked into school that first day, having a uniform, not speaking the same, speaking English but sounding British. And at that age, young kids are very blunt — “You don’t sound like me; you don’t look like me!” You’re just like, “I just want to fit in and I just want to be embraced, and what do I do?”

How did “Mank” come about?

It was very crazy. I put myself on tape the week before I left for Paris. I sent the tape in, got on a plane, got to Paris, was in the middle of filming, and I’m nine hours ahead of L.A. and did a Zoom session with David Fincher. Then I found out that I got it. “Mank” finished mere days before quarantine. I was doing ADR from my closet for “Emily,” and I did some ADR for “Mank” in quarantine as well. They all finished and wrapped up while we were going through this. I feel really lucky that they didn’t get put on hold.