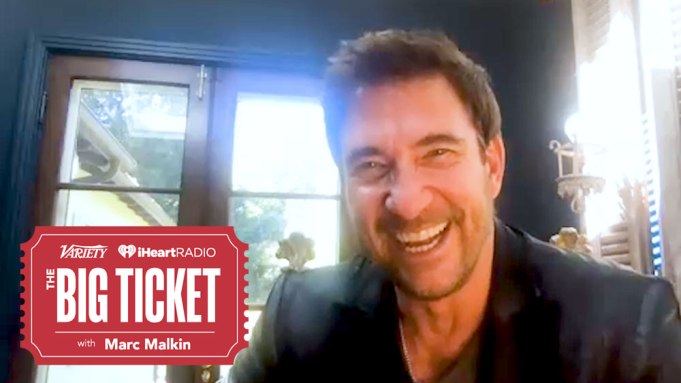 Dylan McDermott has been busy during quarantine. When he’s not hanging out with his kids — like watching “The Umbrella Academy” with his 14-year-old daughter Charlotte — he has been working on a memoir.

“It changed me actually,” McDermott, 58, says on Tuesday’s episode of the Variety and iHeart podcast “The Big Ticket.” “So I’m really happy I did it. I don’t know what I’ll do with it. But I’m really happy because I needed to write it.”

McDermott says the book covers his life from around age four to 23. He was raised between Connecticut with his grandmother and his father in New York City and stepmother, playwright Eve Ensler, after his mother was fatally shot by her boyfriend in 1967. McDermott was only five years old at the time.

“I learned so much s— about everybody and everything, things that had sort of been swept under the carpet or really didn’t know,” McDermott says. “It’s interesting. You go back and interview people and really ask them questions. People really do want to talk.”

McDermott is also celebrating his second Emmy nomination for his work as gas station owner and pimp Ernie West in Netflix’s “Hollywood.” He received his first Emmy nom 21 years ago in 1999 for his breakout work as Bobby Donnell on “The Practice.”

McDermott says the Emmy recognition is a “lot sweeter” this time around. “When you’re young, you think that’s what’s going to keep happening,” he says. “You think, ‘Oh, I’ll just ride into the sunset’ and all of a sudden, reality hits and you realize, ‘Oh, this is really hard.’ It’s hard to get a nomination. It’s hard to gather attention. It doesn’t happen all the time. It took me 21 years to get my second nomination. So I’m much more grateful.”

He remembers getting the call from series co-creator Ryan Murphy telling him he had written Ernie for him. “It’s always the happiest day of your life because you know something great is coming,” says McDermott, who has been working with Murphy for almost a decade since starring in the first season of “American Horror Story.”

For “Hollywood,” Murphy told McDermott he wanted to reinvent him as an actor. “I think he was absolutely right. Every actor needs a reinvention because frankly we get sick of seeing the same person over and over again in similar roles,” McDermott says. “It gets stale. I knew very well that I needed that myself.”

From there, McDermott found himself “consumed” because Ernie took a hold of him. He even had period-specific underwear made to wear while shooting. Ernie reminded him of the men he saw at the bar his father owned in New York’s Greenwich Village. “These guys would come into the bar when I was a boy and they’d be bigger than life and they’d be smoking and drinking, they’d have the lighter and decked out in these clothes,” McDermott remembers. “I was just enamored of them. It’s like, ‘Whoa! How do I ever get to be like that?’”

As for what he’ll wear to the virtual Emmys, McDermott cracked, “Tom Ford on the top. You don’t have to worry about the bottom. Just don’t jump up!”

You can listen to the full interview with McDermott above. You can also find “The Big Ticket” at iHeartRadio or wherever you listen to your favorite podcasts.