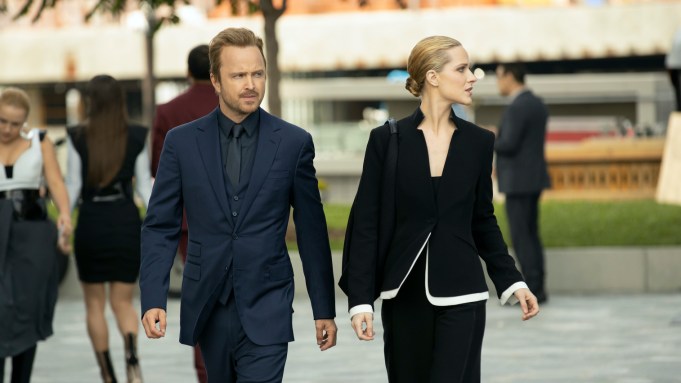 SPOILER ALERT: Do not read if you have not yet watched the fourth episode of “Westworld” Season 3.

Looks like William has finally reached the center of his maze.

This episode of “Westworld” saw the return of the Man in Black (Ed Harris) — however, he was far from the confident gunslinger of the first two seasons. Instead, he was a nervous, disturbed wreck, haunted by visions of his daughter (Katja Herbers), whom he shot and killed last season because he thought she wasn’t real.

What is real, however, is the threat of Charlotte Hale (Tessa Thompson) — or rather the host version of her — who tricked William to prove he has gone mad, and then took full control of Delos.

Meanwhile, the two dynamic duos of Dolores (Evan Rachel Wood) and Caleb (Aaron Paul), and Bernard (Jeffrey Wright) and Stubbs (Luke Hemsworth) were in a race to track down Liam (John Gallagher Jr.), Dolores’ boyfriend from Episode 1, and kidnap him for their various ends. The chase culminated in another fancy party, complete yet again with naked models and ignorant rich people.

And then there was the Maeve (Thandie Newton) storyline, which didn’t end well for the former madam in this episode, to say the least.

All three threads came together at the end for a rug-pull the size of which we’ve all come to expect from “Westworld.”

Here, Variety presents five of the most burning ones from a complicated episode.

What does Dolores want with Caleb exactly?

She took him suit shopping, which in the future turned out to be awfully similar to “The Sims.” Caleb swiped through some posh looking outfits, but the whole time the audience may have been wondering whether Dolores was just playing games with him, or whether she genuinely wanted to help him break free from his computer-generated fate.

Have we seen the last of Stubbs?

After a bruising, highly entertaining fight at the episode’s cocktail party crescendo, Dolores chucked Stubbs off a balcony. A bit rude, really. We didn’t see him land, but surely he’ll have more damage on him than the bruised shoulder he had been nursing so far this season? With Bernard captured at the end of the episode, it could be up to Stubbs, if his motor functions haven’t been too frozen by the fall, to save the day.

Will William ever be put out of his misery?

It certainly feels like poetic justice that William ended up trapped in a crazed mind maze, whose architect is one of the hosts his company created. He may have finally reached the center of said labyrinth, however, as Dolores took pleasure in assuring him, he will never come any closer to figuring out who he is or what is real. Like his father James before him, William has been left to live out the rest of his days trapped, insane and alone.

All through Season 3 so far, Bernard and fans of the show have been trying to work out which other host’s pearls Dolores stole from the park, and into which bodies she put them. Well, it turned out that she hasn’t used any of them yet, but has instead managed to clone her own consciousness and insert it into every host in the real world. Dolores is Dolores; Hale is Dolores; Connells (Tommy Flanagan) is Dolores; the guy from Shogun World is Dolores, heck, who isn’t Dolores? More to the point…

Can anybody stop Dolores?

Serac’s (Vincent Cassel) plan was to send Maeve, an equally intelligent killing machine, after Dolores to kill her. That’s going well so far! The episode closed with Maeve sliced open with a Katana, her blood mixing with white fluid from nearby barrels to form a beautiful piece of artwork. However, on the plus side, the Shogun version of Dolores wasn’t quite able to prize Maeve’s pearl from her skull. Clearly we haven’t seen the last of Maeve, but at this point there doesn’t seem to be anyone who can stop Dolores other than…Dolores herself?