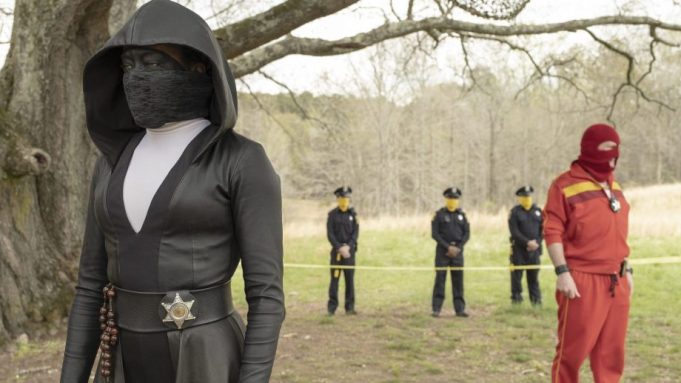 “Watchmen” won best limited series at the Emmys on Sunday, marking the first time a comic-book adaptation has taken home a top prize at the annual celebration of television’s best work.

Although HBO’s “Watchmen” is based on the acclaimed 1986 graphic novel by Alan Moore and Dave Gibbons about a world in which costumed vigilantes are real, the nine-episode series is not a traditional adaptation. Rather than depict the events of the original — as director Zack Snyder did in the 2009 feature film — Lindelof’s team brought the events of the novel into the present day with new characters and a new setting. Most crucially, rather than focus on cold war fears of nuclear annihilation like the original, the new “Watchmen” series dedicates its story to exploring the legacy of racial violence in the United States, through the prism of the real massacre of a prosperous Black neighborhood in Tulsa, Oklahoma in 1921 as depicted in the premiere episode of the show.

In his emotional acceptance speech, executive producer Damon Lindelof dedicated the award to the victims and survivors of that atrocity. “The fires that destroyed Black Wall Street still burn today,” Lindelof said. “The only way to put them out is if we all fight them together.”

Along with its incisive exploration of race in America, “Watchmen” is also unmistakably a comic book show. Several of the characters on “Watchmen,” including lead Angela Abar (Regina King), are cops in the Tulsa police department, but in the world of the series, they wear masks and take on elaborate personas like Sister Night and Looking Glass. “Watchmen” boasts alien clones living on a faraway moon, a trillionaire genius with a plan for world domination, and an omnipotent, omniscient superman whose skin glows blue.

“Watchmen” proved that a show could at once wholeheartedly embrace the familiar tropes of comic books while providing a profoundly trenchant examination of the most pressing issues facing the country today — and win universal acclaim doing so. Fans of comic books have known this was possible for decades. But as with recent best picture nominees “Black Panther” and “Joker,” it’s only in the last few years that the Television Academy has itself embraced shows steeped in genre storytelling, like multiple best drama winner “Game of Thrones” and one of this year’s best drama nominees, “The Mandalorian.” Earlier acclaimed and popular genre series — from “Star Trek: The Next Generation” and “Buffy the Vampire Slayer” to “The Walking Dead” and “Jessica Jones” — had gone largely ignored by the Emmys.

That barrier was finally broken with the first show Lindelof co-created, “Lost,” which won the Emmy for best drama for its first season, one of 11 wins out of 54 nominations over its 2004–2010 run. Lindelof has been clear he’s not interested in making more “Watchmen,” but he’s been equally supportive of HBO enlisting someone else to spearhead a new season.

Speaking in the virtual backstage press room, Lindelof further addressed the possible future of the show. “It would feel like a huge betrayal of [winning for] limited series to come back and say it wasn’t a limited series dot dot dot,” he said. “This was my run on it, and I’ve invited any other artist to take up the baton. … I’m so much more excited about seeing what someone else would do with it.”

With those words — not to mention “Watchmen” winning as many Emmys as “Lost” did in its entire run — the drumbeat for a new season is only going to grow that much louder.

Will Thorne contributed to this story.