Continue to Variety SKIP AD
You will be redirected back to your article in seconds
Sep 20, 2020 2:00pm PT 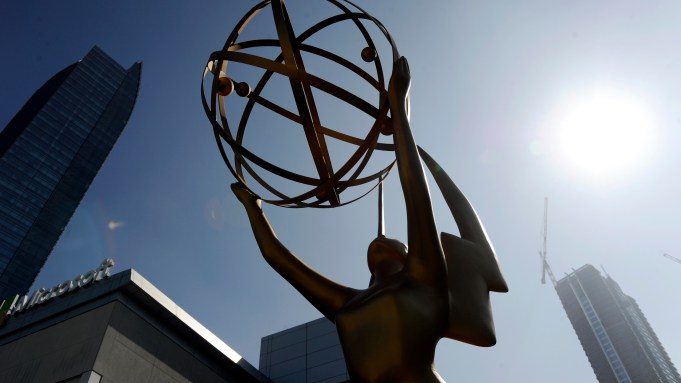 The 72nd Primetime Emmy Awards are finally here, marking the end of one of the most unexpectedly strange awards seasons in history.

Due to the coronavirus pandemic, the Emmys ceremony, like most live events in the past several months, turned into a virtual broadcast this year. There will be no red carpet with the latest fashion and no in-house audience filled with celebrities hopeful for awards, but the show must go on.

Jimmy Kimmel will host the show, which will be broadcast live on ABC on Sunday at 5 p.m. PT/8 p.m. ET. The free broadcast will be available to anyone with an antenna, cable or satellite.

People who have cut the cord can also watch the Emmys with monthly subscriptions to various streaming services. With a monthly cost of $54.99, Hulu With Live TV and AT&T TV Now will livestream this year’s Emmys. YouTube TV, which has a $64.99 monthly fee, also includes ABC. All three services offer free, seven-day trials that viewers can sign up for and then cancel if they wish.

The final livestream event is the “E! After Party” following the main ceremony at 8 p.m. PT/11 p.m. ET.

The 2020 Emmy nominations were full of snubs and surprises. HBO’s “Watchmen” nabbed 26 noms, including an outstanding limited series nod, while Netflix tallied a record 160 nominations across categories. Other surprises include “The Mandalorian’s” drama series nom, as well as “Better Call Saul’s” snubs in acting categories.

The Creative Arts Emmys, broadcast in the days leading up to the Primetime Emmys, awarded artisans and other below-the-line artists working on TV’s hit shows. Led by “Nailed It” host Nicole Byer, the five nights of ceremonies awarded top prizes to shows like “Watchmen,” “The Mandalorian,” “Saturday Night Live” and more.

Several first-time Emmy winners were awarded at the Creative Arts Emmys, including Eddie Murphy, who won for outstanding guest actor in a comedy series for his return to “Saturday Night Live,” hosting 40 years after he started out on the show. Fellow “Saturday Night Live” alum Maya Rudolph also picked up her first Emmys — her first two awards, in fact. The comedian first won for outstanding character voice-over performance for her role as Connie the Hormone Monster on Netflix’s “Big Mouth.” And then during the same week, she won best guest actress in a comedy series for playing Kamala Harris on “Saturday Night Live.”