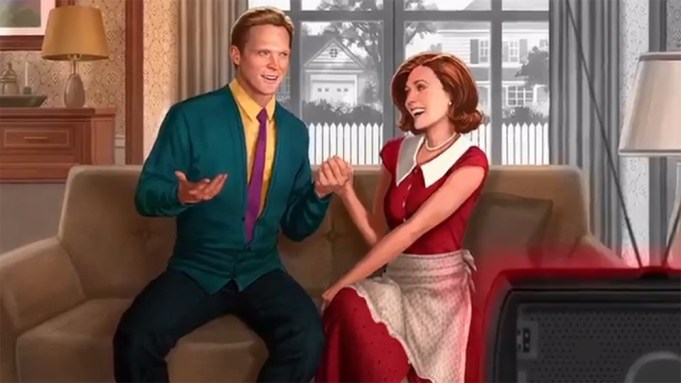 Disney Plus rang in the new decade by announcing that “WandaVision,” its upcoming series about Wanda Maximoff/Scarlet Witch (Elizabeth Olsen) and Vision (Paul Bettany), has been bumped up from 2021 to 2020. An exact release date has not yet been announced.

The news was included in a Twitter video highlighting the nascent streaming service’s slate in the new year. The announcement also dropped some key art for “WandaVision,” which sees Wanda and Vision appropriately dressed for the 1950s-set series.

Marvel Studios had previously said during its 2019 San Diego Comic-Con panel that the series would debut in the spring of 2021. During that SDCC appearance, Olsen teased of the show, “it’s gonna get weird.”

In addition to Olsen and Bettany, “WandaVision” will also star “Mad Men” and “If Beale Street Could Talk” actress Teyonah Parris as an adult version of Monica Rambeau, a character who was introduced as a child in “Captain Marvel.” Kat Dennings and Randall Park will also reprise their MCU roles as Darcy Lewis and FBI agent Jimmy Woo, respectively, in the Disney Plus series. Jac Schaeffer, who was a screenwriter on “Captain Marvel,” will write, produce and showrun the series.

Is this not what 2020 vision means? From #ToyStory 4 and Aladdin to #LizzieMcGuire and WandaVision, here’s a look into our future at the blockbusters and Originals coming to #DisneyPlus this year. pic.twitter.com/QHGMHat89n