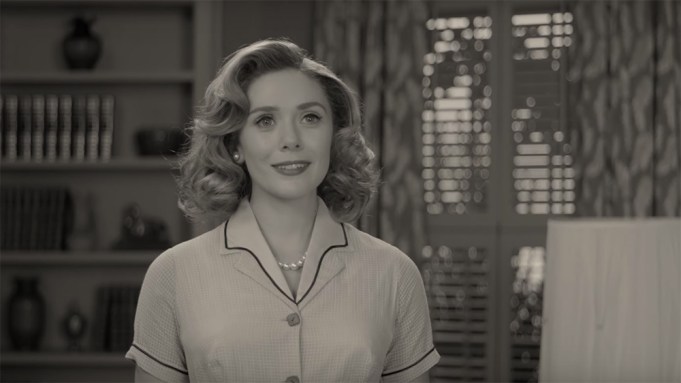 Marvel fans will have to wait a little bit longer for the premiere of “WandaVision,” the Marvel Cinematic Universe’s first TV series on Disney Plus.

Announced on Thursday morning, “WandaVision” will debut on Jan. 15, 2021, a little later than its expected premiere in December 2020.

The series stars Elizabeth Olsen and Paul Bettany in their Marvel superhero roles of Scarlet Witch, a.k.a. Wanda Maximoff, and Vision, a super-powered android. The two appear to live normal suburban lives ripped from a TV sitcom and have left their superhero identities behind. However, the last time Marvel fans saw Vision, he was left for dead after the supervillain Thanos ripped the Mind Stone from his head in “Avengers: Infinity War,” so all may not be what it appears to be in “WandaVision.”

Matt Shakman directed the series, and Jac Schaeffer is the head writer. Fellow cast members include Kathryn Hahn, Debra Jo Rupp and Fred Melamed. Kat Dennings will reprise her role of Darcy Lewis from the “Thor” movies and Randall Park will return as Jimmy Woo, who appeared as an FBI agent in “Ant-Man and the Wasp.” Teyonah Parris will play an adult Monica Rambeau, a fellow Marvel superhero who last appeared as a little girl in “Captain Marvel.”

“WandaVision” was originally slated to be the second Marvel series on Disney Plus, premiering after “The Falcon and the Winter Soldier,” but a production shutdown caused by the coronavirus pandemic caused the Anthony Mackie and Sebastian Stan series to be delayed. Other upcoming Disney Plus and Marvel series include “Ms. Marvel,” “She-Hulk,” “Moon Knight,” “Loki” and a Nick Fury series starring Samuel L. Jackson.

Watch the new teaser below.