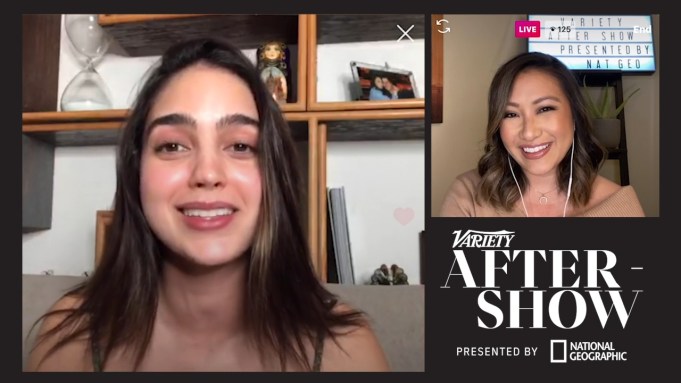 SPOILER ALERT: Do not read if you haven’t watched the Season 3 premiere of “Vida.”

One scene in the Season 3 premiere of “Vida” struck a personal chord with star Melissa Barrera, who plays Lyn: At a party for her boyfriend Rudy’s mother, the free-spirited Hernandez sister is judged harshly for not speaking Spanish fluently or being “Mexican enough” by Rudy’s friends and family, many of whom are from the affluent city of Monterrey in northeastern Mexico. In real life, that is Barrera’s hometown, something she said show creator Tanya Saracho wanted to play with, especially when it came to the dynamics of intra-ethnic discrimination.

“If I’m being completely honest, I used to be that person. So it was fascinating for me to be in that scene and be thinking like this was actually Melissa in, maybe, her high school years meeting Lyn and judging her,” Barrera said on the “Variety After-Show.” “It was kind of gross to think that I used to be that way because since I moved to L.A. three years ago, it opened my mind to the whole spectrum of the Latinx experience.”

That is an experience she said that can include grappling with not feeling welcome in the very country you call home. Barrera grew up in Mexico and earned her U.S. work visa when she got the part of Lyn. She recently applied for her green card and observed that before joining “Vida,” she didn’t fully grasp the complicated nature of being a U.S.-born Latinx person.

“You don’t really think of, emotionally, the toll that it can take on a human being to live and grow up like you don’t fully belong, and you’re not fully welcome in your own country,” she said.

This is also a central theme in “In the Heights,” the Jon M. Chu-directed film adaptation of Lin-Manuel Miranda’s hit musical, in which Barrera stars. The film’s June 2021 theatrical release was recently announced, pushed back a full year from its original scheduled bow because of the coronavirus pandemic. Barrera, for one, is glad that Warner Bros. elected to not release the musical to streaming or video-on-demand.

“I would’ve been, I think, disappointed because it’s such a spectacle,” she said. “The numbers are huge. It’s just so much energy. [There are] hundreds of dancers on the screen and the songs. It needs to be seen with friends, with family on the big screen.”

Meanwhile, back on the small screen in “Vida’s” third and final season, Barrera’s Lyn has fully committed herself to building up the bar she and sister Emma (Mishel Prada) have taken over in the rapidly gentrifying East L.A. neighborhood in which they also live.

While Barrera said Lyn is evolving away from her tendency to adhere to the tastes and whims of the men in her life, that doesn’t mean there’s any shortage of drama coming up — including dealing with the revelation that the Hernandez sisters’ father is very much alive, something they only recently learned (at the end of Season 2), after believing him to be dead for 15 years.

“We get to see them in a non-sexual relationship, of just being there for each other in moments of vulnerability and moments when they’re like, ‘There’s no one else I can open up to but you right now,’” said Barrera.

Watch the full interview with Melissa Barrera on the “Variety After-Show” above.