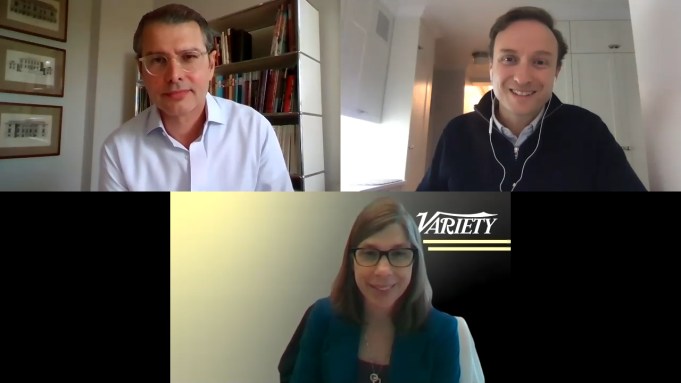 The event highlighted how programmers are pivoting toward building data partnerships to form better, direct relationships with consumers, who are increasingly turning toward customizable digital services.

“How do we help our clients bring access to every impression on every screen, everywhere in the world?” Sims said. “And what that really is about, is about the application of data so that we can make smarter decisions around media investment and media allocation. … So what’s been incredible to see over the last couple of years, is television starts to move in that direction and largely that’s being driven by the consumers, who are moving their consumption habits into connected television platforms, into AVOD (ad-supported video on demand) services.”

According to Bhatia, NBCUniversal consumers have pivoted toward connected TV streaming platforms over the last year and a half, with digital video consumption up by more than half. At the same time, consumption is split among various platforms, so conglomerates must work to meet audiences where they are.

“You want to reach the right amount of people with the right frequency,” Bhatia said. “And historically, that’s been a very hard thing to solve. … In order for you as a marketer to reach the full audience potential, you really have to be in all places with those consumers. … Our recommendation as a programmer is let’s engage with you on a cross-platform basis.”

To meet the needs of consumers and the digitization of the marketplace, content producers work with data management platforms to analyze their consumers’ habits. Then, advertising companies can utilize the information to holistically tailor their campaigns to viewers. As a result, both consumer and advertising spheres have democratized, and video ad space has become more competitive and thus has greater potential for innovation.

“Television creates this opportunity for creativity that doesn’t exist in any other medium, which is that you can leverage the proverbial sight, sound and motion to really connect with the consumer. … Because you can do that and you can have this customized conversation with the consumer,” Sims said. “And creativity will continue to be that engine for both how advertising gets delivered and ultimately how the content is created as well. So it’s just a perfect storm of opportunity.”

With “Psych,” an eight-season USA Network show that debuted in 2006, actors Rodriguez and Hill discussed the transition of the PsychOs from cable to NBCUniversal’s over-the-top subscription video on demand streaming service Peacock, where their second movie premiered in July on a free tier.

Rodriguez, who began production on Season 3 of “A Million Little Things,” and Hill, who is planning for the upcoming reunion with the cast of “The West Wing,” addressed the saturation of content across platforms and how it has not necessarily translated to finding opportunities for employment more easily.

However, Rodriguez and Hill, who both served as producers on the show, with the former writing and directing several episodes, said they were grateful fans were able to access the movie easily through the platform and continue following the characters’ lives. The co-stars, along with screenwriter Steve Franks, look forward to expanding the show’s universe through the streaming service, if possible.

“I think as long as there’s an appetite and our fans remain as devoted to us as they always have been, I think we feel both an obligation and a desire to give back because we couldn’t have done this without Steve, obviously, and we couldn’t have done it without the PsychOs,” Rodriguez said.

Hill echoed Rodriguez’s sentiments, adding: “It always blows me away how the show premiered in 2006 and we’re now in 2020 … the excitement that is there and I guess how it brings people together just to engage in ‘Psych,’ it always blows me away. They’ve been the best group of family that I can ever have asked for — we could have asked for. I look forward to seeing where the journey’s going to go.”