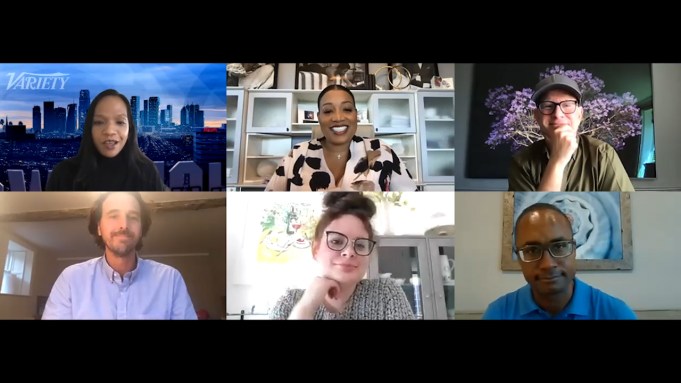 Following weeks of lockdown, production for several shows has resumed with new safety protocols in place to protect cast and crew members. Leaders in the entertainment industry are looking to innovate their approaches to content production, including reimagining budget allocations and what series will look like for viewers.

The panelists discussed how halting or reconfiguring production on their respective shows — which were either already filmed, underway or in pre-production in March and had great momentum — threw a wrench into season plotlines and financial plans. Each had to navigate protecting its employees’ safety while ensuring audience engagement.

However, once it was evident employees were eager to return to work, the panelists said they formed collaborations with current team members, in addition to bringing in experts, to reconfigure production processes.

Additionally, industry leaders sensed that audiences were craving a respite from the overwhelming news cycle. “The function of entertainment is to really give people escapism, provide some levity in their life … People really needed that escapism more than ever,” Rodriguez said. “And whether that escapism was comedy, whether it was nostalgic, whether it was a romantic comedy or a reality show that’s family-friendly that could gather everyone together — I think those are the things that were quickly bubbling up as, as the weeks and the months have gone by.”

Barbato added that navigating the pandemic while figuring out production operations not only included technical and financial burdens, but also an emotional component attached to the crisis affecting millions across the globe.

“When we were back up and running, I think when you are running during COVID, there is this intense, emotional connection with the cast and crew,” Barbato said. “You’re all trusting one another on this level, like, driving into the lock, getting your temperature taken, watching people get tested. It’s a level of intimacy.”

Furthermore, as leaders, Sneed said she and Tyler Perry Studios had to adapt to ensure their staff members were given adequate space and support to take care of personal emergencies and family responsibilities as a result of the pandemic.

Smith added that at PwC and the corporate side of the industry, he and the company leveraged already existing technology to enable contact tracing and safeguard people’s health while maintaining their privacy. On the production side, improvements in technology are being used to innovate content, such as through the use of VR sets. According to Wade, Fox’s “The Masked Singer” opted for virtual laugh tracks via Zoom and AR augmentation for production.

Barbato commented on the silver lining that comes with innovation: “This environment is … terrible, and I look forward to the day I’m coming out on the other side, but if there is a sort of bright side to it, I think it has sort of forced people to be more creative and more open and more democratic when it comes to production.”

While the industry has rapidly adapted to the challenges presented by the pandemic, there are still hurdles ahead. For Sneed, financial obstacles aren’t as pressing as reconfiguring time for breaks and testing. In addition, the segmentation of workers on-set and an overall shorter workday has resulted in a longer pre-production process.

Across the industry, entertainment leaders also have to grapple with insurance issues, as budget expenses have increased up to 30% in some cases, with companies navigating production delays and factoring in costs for testing, renting out hotels and supplying personal protective equipment. However, Smith believes that insurance companies will follow in altering their policies as productions modify plans and set industry standards for what constitutes a safe workplace environment.