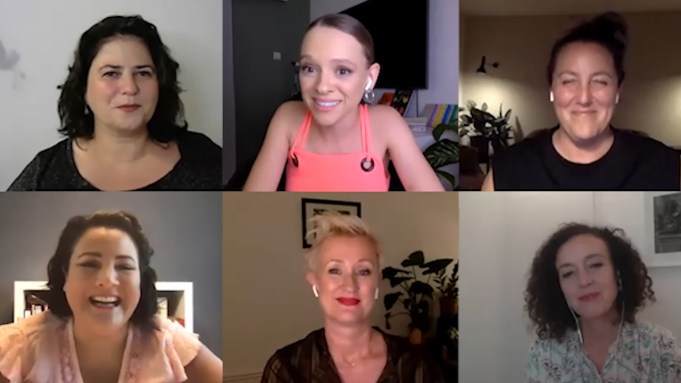 The creators of the Emmy-nominated limited series “Unorthodox” knew from the beginning that executing a show based on Deborah Feldman’s memoir would be no small feat.

Luckily, Winger was already close to Feldman, who pushed her to turn the book into a show in the first place.

“Our kids go to school together here in Berlin, where I live, and so I read the book and I loved it and we became friends,” Winger told Variety editor Jenelle Riley during a Variety Streaming Room event. “At one point she actually said to me, ‘You should make a TV show of my book.’ And the thing is I’m used to writing from scratch, like writing from my imagination. Because [the book] is so internal and so much in her mind and her perspective, I knew that we would have to break it apart and sort of turn it into something new to activate it, to bring it to the screen.”

An integral part of that process was casting. Together, Winger, Schrader and casting director Kling decided to only cast Jewish actors, a choice they felt largely impacted the authenticity of the show.

“You need to know something about the tempo of the community, about the different little nuances that there are,” Kling said. “You can do it if you do loads of research, but it’s easier for a showrunner and a director to work with people who are already quite well-acquainted with the community, to know the tenacities of the characters. Otherwise, it’s just acting and not being.”

Israeli actress Haas not only fit the mold, but greatly intrigued both Schrader and Winger with her audition.

“I opened the computer and there she was,” Schrader said. “Sometimes, you almost feel a physical reaction to something, and I was like, ‘That is Esther.'”

Winger thought the same thing – at the exact same moment.

“I got so excited that I started to write an email to Anna [Winger] describing what I saw and before I could push the send button, I received an email from Anna saying, ‘Look at Shira Haas,'” Schrader said. “Sometimes, coincidences are a source of inspiration and power and also reassuring that we share a taste, we share even timing. It was magical.”

After getting the role, Haas began conducting research on the Hasidic community, even talking to some ex-Orthodox members herself.

“I learned a lot of new things. I mean, for example, even the shaving ritual or the wedding, I wasn’t aware of so many specific details,” Haas said. “We had like a lot of discussions in general about the character and the world that she’s coming from. So yes, it was an amazing trust of research.”

The creators also traveled to Williamsburg to conduct on-the-ground research of the Hasidic community. This was very important for costume designer Seymour, who took it upon herself to discover the intricacies of how Orthodox Jewish people dress.

“I even managed to get a few people to talk to me on the streets,” Seymour said. “I couldn’t quite figure out how the headscarves were tied or what was the structure of them, and one very nervous but kind young lady started to tell me about that. So, we got a really fantastic inside view from the ground up.”

“Esty is different from me, the place that she’s coming from is very different from me. But at the same time while reading it, I really saw myself still within Esty,” Haas said. “The urge of finding yourself, finding your voice, the value of freedom – especially in these last months – people saw in this show and I think it’s a very universal thing.”