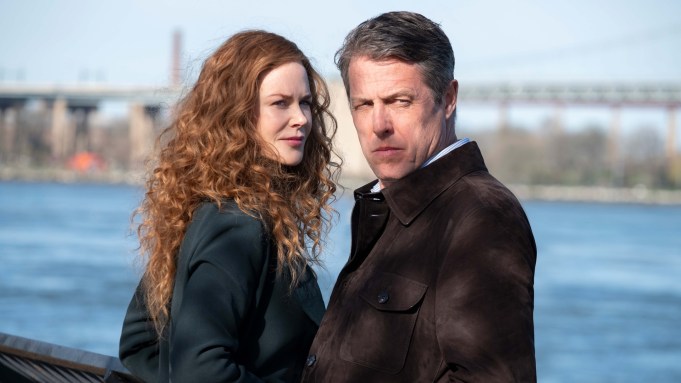 HBO’s new series “The Undoing” marks the first time Nicole Kidman and Hugh Grant have worked together, but becoming the married couple at the center of the series didn’t take too much effort.

“I remember the read-through when we first came to New York,” Kidman tells Variety. “We read all of it in one sitting, didn’t we, which was a great way of doing it … because we just had to jump in and it was really fun and then I remember going to get a cup of tea with [Grant] and asking me lots of really personal questions. I was like, ‘Here we go.’”

Based on Jean Hanff Korelitz’s bestselling novel “You Should Have Known” and created by David E. Kelley, “The Undoing” stars Kidman as Grace Fraser, a New York City psychotherapist whose life unravels when her pediatric oncologist husband Jonathan [Grant] is accused of a gruesome murder. Noah Jupe co-stars as their son and Donald Sutherland plays Grace’s wealthy father.

Variety caught up with Kidman, Grant and series director Susanne Bier ahead of Sunday night’s premiere of the six-part series.

Kidman was already attached to the project when she approached Bier to direct. “I was staying in Los Angeles and Nicole come to my hotel to — I don’t want to say seduce because that may be misunderstood [laughs] — but absolutely convinced me to do it in a very, very convincing way, as in, ‘you’re not going to stay alive if you don’t do it’ kind of thing,” Bier recalled.

It was Bier’s idea to cast Grant. “I have wanted to work with Hugh forever and I thought this was the chance,” Bier said. “They would be a really great, sexy couple.”

Kidman agreed. “Part of the way in which this has to work is that you want these people to be together,” she said. “I hope people want us to be together — not in real life obviously — but I hope that’s the desire on screen.”

Grant was fascinated by the idea that Jonathan may not be the saintly doctor that so many people think he is. “One gets the feeling ‘what a lovely man, but is he too lovely?’” he said. “The metaphor I always had in my head was you’re wearing a lovely old cotton shirt and then you start to think, ‘Is there a tiny bit of viscose in this cotton? It is a bit too easy to iron.’”

Noticing Kidman’s perplexed look, Grant said, “Does that make any sense or do I sound insane?”

As for Kidman’s take on Grace, she said she gained insight from her character’s need to walk alone through New York City. “The idea of someone who just walks, who goes out to just process things, walking to escape, to hide,” she said. “I wasn’t quite sure how that was going to work. We shot so much of that. The hypnotic quality suddenly became … how I entered her.”

Bier was amazed how effortlessly Kidman transformed into Grace while rehearsing and filming. She said the Oscar winner could be holding a cup of tea one minute as herself, but as soon as she became Grace, she actually changed the way she held the cup. “Nicole is able to access a different character in an almost scary way,” Bier said. “I think Nicole is from out of space or something, or a mutant.”

Kidman cracked, “I’m from that far-off planet. Have you heard of it? Pluto! I want to be from Pluto.”

Grant took it a bit further by describing Kidman’s acting as “witch craft” because it was so distinctive, as opposed to his more analytical approach.

Kidman shot back, “Now I’m saying I’m from planets. I’m a witch. It’s going to get really tough for me out there. I want be a fairy. I want to be a fairy from Pluto.”

Whatever the case may be, Grant feels confident “The Undoing” is going to be a hit because one of his toughest critics is a fan.

“I watched it with my wife and she has pretty much hated everything I’ve ever done, but she was obsessed with this,” he said. “If I had said, ‘No, we’re not watching another episode tonight,’ she would have physically harmed me.”