‘The Umbrella Academy’ Season 2 Preview: Where Are the Hargreeves Now? 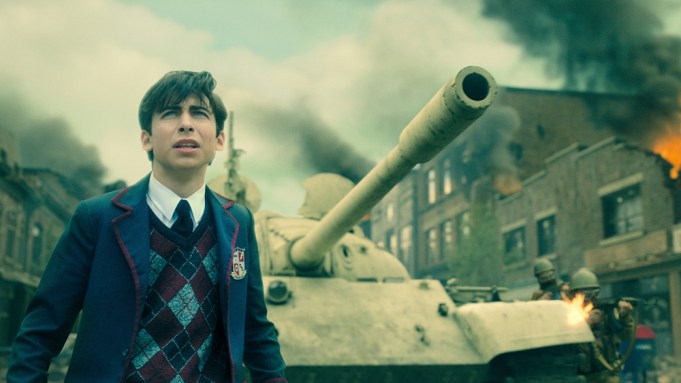 When “The Umbrella Academy” drops its second season on Netflix on July 31, it won’t find the Hargreeves as a united front fighting to stop the apocalypse — at least not right away. Instead, it’ll find the siblings thrown six decades back in time, separated and, in some cases, building their own lives apart from each other.

At a recent virtual junket, the cast and creator Steve Blackman previewed the second season, which was loosely inspired by the “Dallas” limited series of Gerard Way’s comic book and picks up after Five (Aidan Gallagher) throws the Hargreeves back in time to escape the apocalypse that Vanya (Ellen Page) spawned in 2019. However, Five’s attempt to save them does have its hiccups, dropping them separately in Dallas over a three-year period from 1960 to 1963. It also messes with the timeline, causing another impending doomsday and involving complications with the assassination of John F. Kennedy — all things the Hargreeves will have to worry about once they get back together.

Blackman says he wanted to make it a bit “challenging” for everyone to find each other once again, with some building new lives for themselves in the past, forging relationships with new characters, while others drop into Dallas later.

“Klaus starts a cult, Allison gets married, Luther finds a surrogate father,” he says. “It was really important to develop those stories. They were tricky, because you know, each of those new characters had to sort of still work within our world until the family finds themselves again and sort of regroups, probably even stronger than they did in Season 1.”

Allison (Emmy Raver-Lampman) is among the first to land, falling into Dallas in 1961 at the height of the Civil Rights Movement. In addition to being separated from her daughter and siblings and having lost her voice at the hands of Vanya at the end of Season 1, she also has to deal with “the reality of having a Black woman literally fall into the ’60s in the segregated South.” Allison is, Raver-Lampman explains, initially in shock.

“She might not know exactly where in the world she is, but I think she knows exactly where she’s not supposed to be because of the color of her skin,” she said. “Coming from the 21st century, I’m sure she has faced, you know, prejudice and microaggressions, and racism on some level. But immediately being threatened because of the color of her skin, I think, and legally not being allowed to be places — it has got to be absolutely terrifying.”

“I think she’s at a low in so many ways,” Raver-Lampson adds.

Luther (Tom Hopper), too, is dealing with “a big shock to his system.” Once something of a leader for the family, Luther’s now the driver for the owner of a burlesque bar, who becomes a father figure to him. While it’s an adjustment, Hopper says it presents an opportunity for Luther “to find his own identity outside of the academy,” and to learn what it’s like to have to work to make a living.

“I think he realizes that he was a bit too power-hungry, I suppose, and a lot of the decisions he made weren’t the best ones,” Hopper says. “It’s a big come down to Earth for Luther, I think, but also it’s something that he needed.”

Vanya, meanwhile, doesn’t even have the opportunity to process her actions at the end of Season 1 — because she’s almost immediately hit by a car and suffers memory loss, which is something of a blessing and a curse. She’s taken in by a family, finds a new love interest and, while she’s confused and lost, Page says it presents the opportunity to see a “very different” Vanya.

“She’s released a lot of emotion and repressed trauma, so we find her in a space that’s much lighter. She’s much more open, able to connect to her emotions,” she says. “I think of course it’s difficult for her because she’s feeling like, does anybody care? Is anybody trying to find me? And feeling lost in that sense. But in so many ways, she’s way less lost than she was in the first season.”

Diego (David Castañeda) drops into Dallas in 1963, and is thrown into an asylum because of his seemingly delusional claims of Kennedy being assassinated. He finds a friend in a new character named Lila, which turns into a Bonnie and Clyde-esque partnership, and also has a purpose to work toward.

“We find him lost, trapped in an insane asylum and obviously with a purpose of trying to maybe change the timeline, having the capability of proving his father wrong and also maybe understanding him a little bit,” Castañeda says. “And then everything just kind of goes bonkers when Five decides to show up again.”

Five is the last to land, and in the meantime, his siblings have done “considerable damage” to the timeline, Gallagher says. He’s left with several fires to put out, trying to stop the end of the world in the ’60s, while also needing to get back to 2019 and prevent the apocalypse there.

“He just gets progressively more and more stressed and as his anxiety builds up, so does the chaos behind his eyes,” he says. “That was very fun as an actor to see that sort of bubble over and really take over Five, and him really succumb to his suppressed insanity.”

The only two Hargreeves who start off together are, for obvious reasons, Klaus (Robert Sheehan) and the late Ben (Justin H. Min). They’re the first to land in the past, giving Klaus time to, well, become a cult leader. Although it might seem like he’s thriving, being an icon has it’s drawbacks, he’s realizing.

“The novelty of being adored and worshiped by all these thousands of people has sort of very, very quickly worn off and he realizes that being number one, if you will, is a real drag,” Sheehan says. “He’s sort of back to escaping again. It’s like sobriety was his cult in the first series, you know, and drugs was his escape, whereas his escape in the second series is just running with his legs.”

And although Ben is inevitably tied to Klaus because of the latter’s ability to communicate with the dead, Min teases that Season 2 will see him come into his own a bit, especially after Klaus and Ben combined their powers at the end of Season 1 to save the day.

“I think through the evolution and progression of Klaus’ powers, Ben gains a lot more agency and independence in the second season and is able to really fight for what he wants,” Min says.

And will audiences finally learn about Ben’s backstory and how he died? Min says “there are some hints” to what happened — but of course, he can’t reveal much.

“If I say anything more, I will be — ” he says, before Sheehan finishes for him, “assassinated. Like John F. Kennedy.”