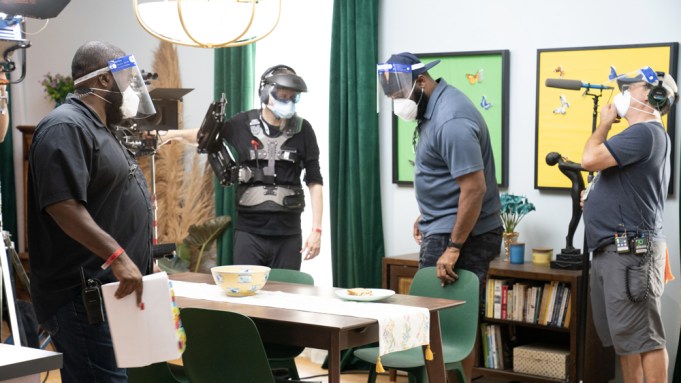 Tyler Perry wants you to wear your mask.

After successfully completing production on his BET series “Sistas” without a single case of COVID-19 during the two-week shoot, shooting on “The Oval” is up next, with cast and select crew beginning to arrive at Tyler Perry Studios for their stint in “Camp Quarantine” on Thursday. And Perry says there’s not much he plans to do differently this time around, especially when it comes to having everyone wear masks both on-set and around the 330-acre campus.

“I made sure that the cast and crew and everybody wore their masks when they weren’t on set because I do know for a fact that masks help stop the spread — scientifically, I know that,” Perry tells Variety. “And everybody adhered to that, even though we were all testing negative. I just didn’t want someone to be incubating with [COVID-19] for three to 12 days, and we not know it.”

Perry and the “Sistas” crew wore their masks between 12 and 14 hours while shooting the 22-episode season, with an hour and a half lunch break as a chance to catch their breath.

“Listen, I was the mask police. Every time I saw something I was screaming about it,” Perry says. “It’s summer in Georgia so credit to the crew — it’s burning up here and they were still doing the right thing. So, I gave a lot more breaks for people to have water because we had a couple people that got dehydrated from all the heat, and the water breaks were actually the ‘breath break’ where you can pull your mask down, drink some water and get some fresh air.”

Of wearing his mask while directing the show, Perry admitted that he did feel “mask-drunk” from time to time due to lack of oxygen, but the team got through it. “For me, once I got the actors comfortable seeing me looking like a man from outer space, it was fine. But you’ve got to remember that I direct in a wig and a dress sometimes so that wasn’t as odd for me,” he jokes.

To perfect their method of working in the quarantine bubble, Perry’s team worked with Emory University’s Dr. Carlos Del Rio, Dr. Sanjay Gupta and Dr. Colleen Kraft to execute a rigorous testing schedule with a nasal swab test administered upon arrival at Tyler Perry Studios and follow up tonsil tests every four days on site.

“Every fourth day was so important and that’s when my anxiety was raised most, [especially] in those first two tests, because I was so concerned,” he recalls.

“I felt this wave of relief after the last test results, where everybody was negative, I was like, ‘Okay, we pulled it off,’ so I’m so proud of my crew,” Perry says, celebrating his group of “underdogs” for the achievement. “I don’t know how any other production, if you’re not in quarantine, I don’t know how you do it, but testing is key.”

Though Perry took extra care to address COVID behind the scenes, he says that his shows will not reference the pandemic in any upcoming storylines.

“All these scripts were finished right at the time that COVID started to show up,” Perry explains. “And also, what I know about COVID is people are tired of hearing of it, and entertainment is escape, so I don’t think my audience want to brought into more of what is happening in their reality. All of my work has been about escapism, so I’m just going to hold to escapism.”

One challenge to production, though, is operating with a reduced crew size; Perry says his crews were reduced by about 80-100 members, with a total of 360 people on site for production on “Sistas.” When asked whether he thinks shows will continue to go on with reduced crew sizes after the pandemic is over, he concedes that there is some financial reasoning to do so.

“I think that the producers and the people who are controlling the purse strings would definitely want to hold it to this [size],” Perry says. “But I can tell you that it was stressful on some of my crew, because they were down people. So, I would make sure that they had what they needed to continue this way.”

Citing one specific example, he adds, “The extras are a problem, especially when you’re doing big scenes and you only have 10 extras. You’re changing their clothes, moving them around the room and hoping that people don’t recognize them, trying to shoot the back of their heads or having the crew jump in and be extras. That was a challenge. Some things I think we will be good for this [to continue], but others won’t work.” 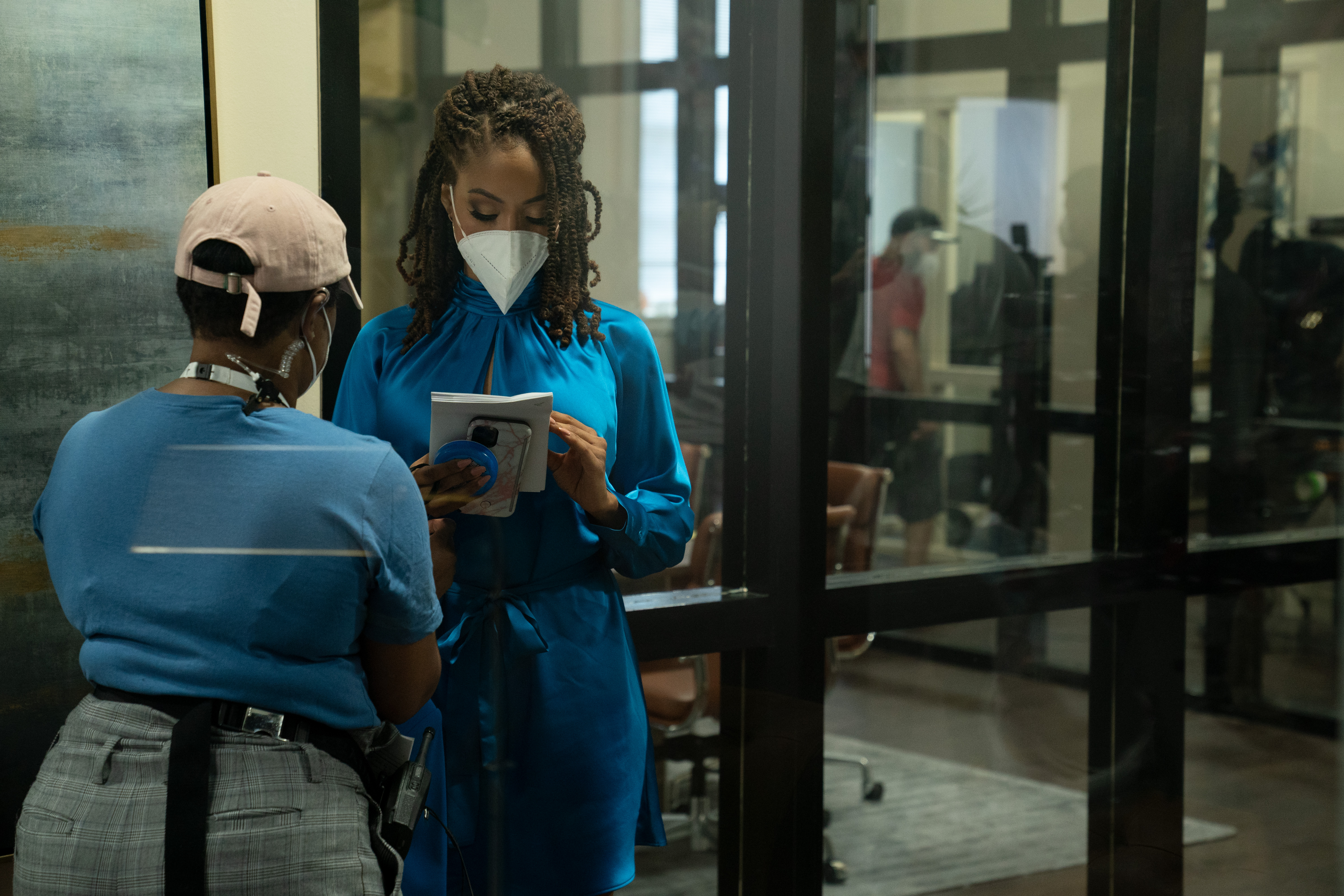 Another challenge to producing content during the pandemic is the sheer cost — which in Perry’s case, included housing all cast and crew at Tyler Perry Studios and flying out-of-town players into Atlanta via private planes. Perry previously told Variety that he expected costs to be high, now estimating that after producing “Sistas,” “The Oval,” “Ruthless,” and “Bruh” (which will all shoot in succession), the total could be somewhere around $18 million.

Michelle Sneed, the president of production and development for Tyler Perry Studios, further detailed the logistics of filming, explaining that the ultimate cost of COVID precautions was somewhat higher than initially budgeted for, though most of the extra spending was unavoidable.

“The most important thing is to trust people to do their job and to be able to acclimate to whatever these COVID standards are,” Sneed says. “What COVID does for production is slow it down — it costs money and it slows it down. So, our thing was, is it going to be ridiculous for cast to wear masks? Can a cast member really take off their mask as soon as they open their mouth to do a scene? Absolutely — they can and they did. Can our camera people really wear a face shield with a mask even if he wears eyeglasses. Absolutely, yes he did. So I think it’s trusting these professionals and crew to do what they have to do.”

Prior to filming, Perry’s team added 315 one-bedroom housing units with private bathrooms (which Perry likes to call “luxury mobile hotel rooms” or pods, which house 14 people each) in addition to the 60 housing units for cast and crew. They also added more than 70 golf carts (according to Sneed, most productions would have 20-25 golf carts) for transporting cast and crew around the campus and allowing for more social distancing than average production vehicles. In addition to two COVID compliance officers, Perry’s team also employed a safe service officers to oversee food. Sneed says they also ended up doubling the housekeeping staff on site.

The most significant cost, though, came with the different kinds of PPE gear each department would need to perform their specialty, which required “trial and error” to figure out. “We’d discover we have to get the $15 per face shield, versus the $3 one that we had budgeted for, for departments that rely heavily on face shields, or get these version of the goggles for this department, so that really adds up,” she explains.

Perry and his team also paid for the cast to have some socially distanced fun too. “When you’ve got 360 adults were working these kinds of hours, of course, I had to have a bar, food trucks, and movie night on the lawn and church on Sunday, so that people could feel like they were at least not in prison,” Perry says.

And in addition to working during the pandemic, Perry is also filming during industry’s internal reckoning about how the Black Lives Matter movement relates to changes needed in Hollywood.

“George Floyd’s death, as horrific and tragic as it was, it was the thing that was the catalyst to open people’s eyes,” Perry says. “When people saw that played out — eight minutes and 46 seconds, real time video of what really happened — I think it just struck a chord of the conscience of America. So, to see so many races galvanizing together to come and fight this level of injustice has been so moving to me. I just want to be sure that that message doesn’t get lost about what we’re fighting for. More than anything I’m grateful that all industries are waking up and going, ‘Wait a minute, there is something that we can do here there is something wrong.’ That makes me very proud of just the human spirit of our country.”

Speaking of the record-number of Black actors nominated for Emmy Awards this year, Perry says: “It says a lot about the Emmys, the governors and the voters and all that they’re doing to try to at least hear — that’s what it’s so important — that we hear each other. I was very happy to see that because I feel like Hollywood is a place that dreams come true for everybody, and to have the Emmys recognize so many people of color, it was really, really moving for me.”

When it comes to what else he wants to see from Hollywood, Perry defers to the mentality that has gotten him so far professionally.

“I come from a people who had to find a way — make your own way, own your own way, build your business, build your studio. That’s my mentality, so rather than asking Hollywood what they can do, I want to see more people like me, just come in and own, and take a sledgehammer to anything that is unjust,” he explains. “Ownership is what really changes things long term, because what happens is, when there’s a movement, people get excited and they’re with it. But when it fades, things tend to go back to where they were. If there are more people in ownership and more people in power and more people rising through the ranks in Hollywood, I think that is that is the change that is really needed to make a long-term difference.”