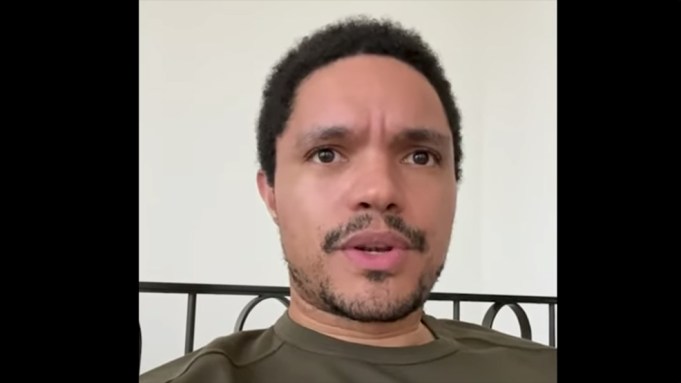 In an emotional video message, “The Daily Show” host Trevor Noah addressed the systemic racism in the U.S. and the explosion of protests in response to the death of George Floyd.

“Daily Show” is in reruns this week. On Monday, Noah released an 18-minute video discussing the domino effect that the news cycle has had on shining visibility on the deaths and altercations between police and unarmed African Americans.

“I saw so many people online saying, ‘These riots are disgusting, this is not how a society should be run, you do not loot and you do not burn, this is not how our society is built,'” Noah said. “But what is society? When you boil it down, society is a contract we sign as human beings amongst each other. ‘Amongst this group of us, we agree in common rules, common ideals, and common practices that are going to define us as a group.'”

Noah started by highlighting Christian Cooper, a black man in Central Park who asked Amy Cooper, a white woman, to leash her dog, resulting in an altercation in which Cooper threatened to call the police on him to say that an African American man was threatening her life. He then discussed the shooting of Ahmaud Arbery in Georgia as another domino that shone a light on the racism present in our country. And then, he said, the video of Floyd’s death on May 25 from asphyxiation — after a Minneapolis police officer pressed his knee into Floyd’s neck for nearly nine minutes — was the final spark that incited protests held across the country and around the world.

“The video of George Floyd comes out, and I don’t know what made the video more painful for people to watch, the fact that that man was having his life taken in front of our eyes, the fact that we were watching someone being murdered by someone who’s job is to protect and serve, or the fact that he seemed so calm doing it,” said Noah.

“One ray of sunshine for me was seeing how many people instantly condemned [the Floyd video],” he said. “I don’t think I’ve ever seen anything like that. Especially not in America. I haven’t seen a police video come out and just see across the board. I mean, even Fox News commentators and police chiefs from around the country immediately condemning what they saw. No questions, not, ‘What was he doing?’ Just going, ‘No, what happened here was wrong.'”

He then began speaking about the subsequent riots, saying that some people are condemning the looting and fires. He pointed to the reality of our society as being the culprit and epitome of the frustration. The real looting is the police “looting black bodies,” he said.

“We need people at the top to be the most accountable because they are the ones who are basically setting the tone and the tenure for everything we do in society,” said Noah. “The reason that [we lead by example] is because we understand that in society, that if we lead by example, there is a good chance that people will follow that example that you have set. And so if the example law enforcement is setting is that they do not adhere to the laws, then why should the citizens of that society adhere to the laws when in fact the law enforcers the law enforcers themselves don’t.”