‘Too Hot To Handle’: Francesca Says She’s Not Engaged To Harry Yet 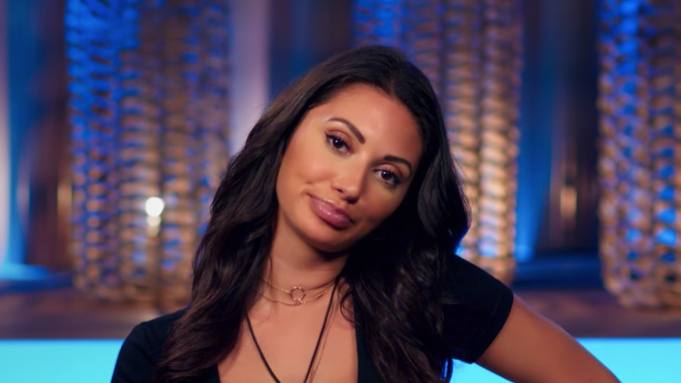 Harry Jowsey proposed to Francesca Farago with a Ring Pop on Netflix’s reunion episode of “Too Hot To Handle,” but the breakout couple from the streaming reality show isn’t actually engaged — yet.

“I asked him, like, ‘Are we engaged?’ And he’s like, ‘I asked you to marry me, so I don’t know,'” Farago told Variety on Monday during in Instagram Live chat, recalling her conversation with Jowsey, following the reunion episode, which Netflix filmed with the cast via Zoom.

“I think it definitely just needs to be done in-person, like a proper proposal. So, as of right now, no, we’re not engaged, for everyone who’s been asking,” Farago explains. She then adds, “I mean, we kind of are, but I don’t know because how do you really decide that via Zoom call? It’s hard to say. But we talked about it. We had a shared folder about wedding rings, and he kept saying, ‘What ring do you want?’ And I just said, ‘Oh, just get me a Ring Pop,’ so that’s what I said…it was funny, it was cute, I was definitely not prepared for it. It was a cute gesture.”

Speaking to Variety in a wide-ranging conversation, the reality personality and social media star spoke candidly about showcasing her sexuality on-screen. She admits she is shocked that the public perception of her has been so positive.

“You kind of have nightmares about how you’re going to be portrayed,” Farago explains of anticipating the release of the show, which she filmed in 2019. “Of course, living in the house, I wasn’t everyone’s favorite, so I thought that when the show came out that I was going to be the villain — I was prepared to be the Carole Baskin,” she says, referring to Netflix other hit quarantine show, “Tiger King.”

Admitting that she was prepared to be “slut-shamed” more online, Farago has been pleased with the overwhelmingly positive comments. For the record, she has garnered more than 4 million Instagram followers since the show launched less than a month ago.

“I think there has definitely been a lot of progress made because I haven’t been slut-shamed at all,” Farago says, adding that society has “definitely we have come a long way.”

Here, Farago speaks about her relationship with Jowsey, her parents’ reaction to watching the show and how “Too Hot To Handle” is empowering for women.

You’re not technically engaged yet, but you plan to be, so have you and Harry discussed wedding plans?

Were you nervous about what the public perception would be to you, after the show came out?

I was like, “Okay, everyone is going to hate me, it’s fine.” … I was the only person who did controversial things, as well as Haley, so I was nervous. It’s been way more positive than I was expected. I get maybe one bad comment out of every 200 comments.

The contestants obviously didn’t know they would show up to Mexico and not be allowed to have sex, but what were you told about the premise of the show when you originally signed on?

Before I even flew there, I really didn’t know. I just thought it was going to be a new concept. My theory was that it was going to be “Influencer Island,” so I was like they’re getting a bunch of influencers, they’re putting us on an island and they’re going to take away all of our technology and they’re going to make us do all this crazy stuff…closer to right before we left when I found out I needed to be single, I was like, “Maybe this is dating.”

The questions that I was being asked were dating and sexual-oriented questions, like, “How do you feel about one-ninth stands? How many ex-boyfriends do you have? Tell us some crazy stories about stuff you’ve done with guys.” They never asked, “Are you cool with having sex on camera?” I feel like once you’re applying to be in this situation and going through the process of auditioning, you know what you’re signing up for and you know how reality TV is and you have to be very open to put yourself out there.

There has been some criticism to the show because there has been so much body positivity in media, and this show is very focused on one type of image. The show is diverse, but not diverse, in terms of body type. What do you think about that?

What was it like having your parents watch the show?

I feel like I’ve detached myself from it. I think sometimes that everyone saw me go under the covers and that’s kind of weird, but my close friends and my close family, they know who I am and they know my personality…and they just know that I’m a sexual person. No one said anything negative to me that’s related to me or that’s friends with me…My mom, the other day, she was like, “I’m so proud of you, even though you gave a b—- on TV.” Growing up, they were so strict, but now, they’re being surprisingly chill with the whole situation. I haven’t gotten one bad comment. It’s shocking.

How about comments online? Have you experienced any slut-shaming?

I saw some stuff on Facebook that was said to me about my lips. I don’t read any articles. I go through the comments on my posts because I like to respond and read the nice things, and maybe every hundredth [comment], there’s a bad one…it’s usually just about my physical appearance. It’s not usually slut-shaming, which is weird, because you’d think it would be, but it’s not. They’re probably out there. I really avoid negativity because you can just get into a downward rabbit hole of looking at bad stuff about you and it just makes you feel awful. People are going to have a negative opinion about you no matter what, so you just have to not let it bother you.

There’s been so much progress with programming with equality between men and women — why can’t women show their sexuality, too? There is a good argument to be made about owning your sexuality and female empowering. What do you think about that?

I don’t know if anyone follows Emily Ratajkowski. Her whole message about women empowerment, and about being sexual — you can be sexual and you can be intelligent — really resonates with me because everything regarding that message is definitely what I stand for.