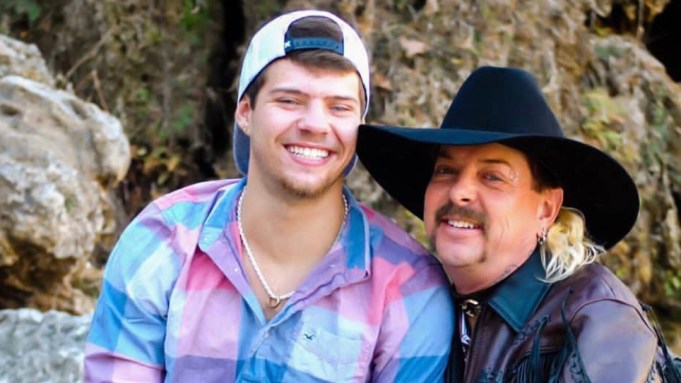 The Tiger King is still a married man.

Ever since “Tiger King: Murder, Mayhem and Madness” dropped on Netflix less than two weeks ago, viewers have wondered if Joe Exotic (whose real name is Joseph Maldonado-Passage) and his fourth husband, Dillon Passage, are still together.

“We are still married,” Passage, 24, said during an exclusive interview with “Variety Live!” on Tuesday.

The 57-year-old infamous zoo owner is currently serving a 22-year prison sentence after being convicted of 17 counts of animal cruelty as well as conspiring to have his business nemesis Carole Baskin killed.

“I wasn’t just going to abandon him when he needed help because he was there for me,” Passage said. “I felt it was only right to stand by him and not judge him for the circumstance because I understood his relationship with Carole. It was a very negative kind of thing and he was in a dark place when all of this stuff occurred. He just needed support so I was just going to stand next to him.”

Passage says he last spoke with Maldonado-Passage last week. “He had received hundreds and hundreds of emails, and he was spending all day on the computer just going through these emails and trying to respond to them,” he said. “He had people from all over the world saying like, ‘Team Joe’ [and] ‘Free Joe.’”

Maldonado-Passage, to no surprise, is basking in the attention. “He was really excited,” Passage said. “I would talk to him about some of the memes that were made and he just laughed his butt off. It was hilarious. He loved it. … He loves the attention, obviously, so any fame or spotlight that he has had was greatly appreciated.”

Since their last phone call, Maldonado-Passage has been transferred from Oklahoma’s Grady County Jail to a federal prison in Texas. However, according to Passage, he was sent to the prison’s medical facility for a 14-day quarantine because of COVID-19. Passage says he’s still waiting to hear why, but he doesn’t believe Maldonado-Passage has coronavirus. Variety confirms he is in the medical facility, but prison officials cannot discuss why he’s there because of HIPAA restrictions.

Passage first met Maldonado-Passage about two years ago at his Safari Bar. Maldonado-Passage serenaded Passage with a karaoke performance of his song “This Old Town” before inviting him back to the zoo — about a half-mile from the bar. “I got to play with baby tigers, which was frickin’ insane,” Passage recalled. He returned the following evening after Maldonado-Passage, then running for Oklahoma governor, took him to a Christmas parade. “Then I just never left the zoo,” Passage said.

Passage was 22 at the time and says he was battling an addiction to prescription pills, specifically Xanax. “Joe helped me get healthy again, get me in the right mental state,” he said. “I felt alone. I felt like there was going to be nobody there for me. Joe made me feel like there was reason to be alive.”

As for speculation about the sexualities of Maldonado-Passage’s former husbands John Finlay and the late Travis Maldonado, and their reasons for marrying Maldonado-Passage (the doc alleges that the men were more interested in the drugs Joe may have been providing them than any sort of romance), Passage said, “I am in no way straight. I am as gay as they can be.”

Passage came into Maldonado-Passage’s life shortly after Maldonado’s accidental shooting death, but “I heard from multiple people that Travis loved Joe unconditionally, never wanted to take his wedding ring off. He loved Joe for Joe. He might not have been gay but … you could build a connection with anybody,” he said.

“They had a very strong bond in my opinion, not from first hand, but what I heard and videos I had seen and that were not seen in the documentary,” Passage added. As for drug use at the zoo, Passage insists he never saw Maldonado-Passage or anyone else using.

While Passage describes the documentary as “very authentic,” he also insisted he had no idea what Maldonado-Passage was allegedly up to when he was arrested. He described the case as “complicated” and believes Maldonado-Passage didn’t receive a fair trial.

“He’s, honest to God, a really good man and he has good beliefs,” Passage said. “When people need help, he’s the first person that they call and he doesn’t hesitate to say yes. He’s bailed so many people out of jail, he’s gotten them vehicles. He has fed them when they had no food. I’d come home all the time and people would be raiding our fridge.”

Passage currently lives in western Florida. He’s a bartender but isn’t working right now because of business closures in the wake of the coronavirus pandemic.

Asked what he would do if Maldonado-Passage were released from prison tomorrow, Passage said, “I’d go pick him up and he’d come live with me where I’m at [because] this is our house and I have our dog. And I think his main goal would be to get his animals back because it was his dream and his brother’s dream to have the zoo and to do something. And he spent 15 years doing it — 15-plus years — and his whole life’s work was just taken away from him like that.”