‘Tiger King’ Aftershow: Everything We Learned in the New Episode 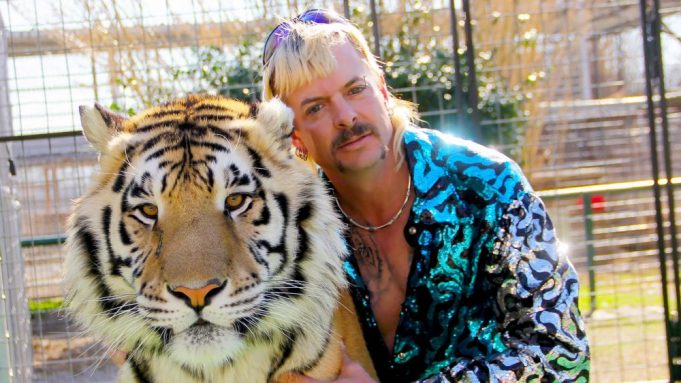 For all you cool cats and kittens who need more “Tiger King,” Netflix delivered a bonus episode of interviews on Sunday morning.

Hosted by Joel McHale, “The Tiger King and I” aftershow brought back favorites like John Finlay, Erik Cowie and Kelci “Saff” Saffery. The “Tiger King” crew talked about how they’re getting used to their new celebrity statuses and revealed a few secrets that didn’t make it into the show.

Here are the highlights from the interviews.

The show saved the best interview for last as TV producer Rick Kirkham dropped a few bombshells, including that his wannabe TV star was scared of his own animals. Joe Exotic (whose real name is Joseph Maldonado-Passage) would regularly pose with two tigers who were blind and tranquilized, posing no threat to him.

Joe killed a horse and fed it to tigers

Kirkham shared another gruesome story about Maldonado-Passage where he pretended to take in an old horse from a woman who visited his zoo. Maldonado-Passage instructed Kirkham to keep the cameras rolling as he agreed to take care of the horse, but then shot it dead when the woman left, saying “I don’t take care of nobody’s animals. Now they’re tiger meat.” He then chopped up the horse’s body and fed it to his tigers, according to Kirkham.

Zoo manager Saffery didn’t have any problem talking about the tiger attack that mauled his hand, and said footage of the incident was used in a safety video at the zoo. Maldonado-Passage never gave him any money after the accident or spoke to him about it again. Saffery added that he trusts the tiger that attacked him more than he trusts his former boss.

Joe spoke to a shaman after Travis’ death

After Travis Maldonado died from an accidental, self-inflicted gunshot, Maldonado-Passage visited a shaman to help come to terms with the loss, according to Joshua Dial. The former campaign manager said that Maldonado-Passage’s condition worsened after his shaman visit.

James Garretson first appeared as Jeff Lowe’s friend and business partner, but was soon revealed to be an FBI informant who helped take down Maldonado-Passage. Garretson claimed he became the FBI’s mole because they were willing to forgive him for illegally owning a lemur, but Lowe claims there’s more to the story. Sadly, Lowe didn’t elaborate on what he knew.

As if it were an unspoken rule, Lowe was almost always seen sporting an Affliction brand t-shirt on “Tiger King.” He claimed he owned between 60 and 70 of the graphic tees, and added that he only started wearing leather jackets after he worked at the zoo because his arms would get scratched.

Nobody knows why Allen was in the bathtub

One of the standout interviews from “Tiger King” was conducted in a bathtub with Lowe’s friend and Maldonado-Passage’s hitman, Allen Glover. There was sadly no explanation or context in the show for why Glover was in the tub shirtless, and not even Lowe knows.

Many people are already imagining which actors would be perfect for a “Tiger King” movie, and several of the interviewees gave their choices. Former zoo manager John Reinke chose Matthew McConaughey; Kirkham said Billy Bob Thornton; and Saffery wanted “Johnny Tsunami” actor Brandon Baker or joked Ken Jeong may be a good fit. John Finlay told Variety that Channing Tatum, Shia LaBeouf or Tom Hardy would be his picks.

There isn’t much sympathy for Joe

Maldonado-Passage was convicted to 22 years in prison for animal abuse and plotting a murder-for-hire, and not many people want to see him freed. Zoo employee Cowie said “good riddance” and that he’ll likely die in jail. Many people recalled the owner’s bad temper and cruelty to animals, and Cowie and Kirkham regret ever meeting him. Saffery was the only one to say that he hopes Maldonado-Passage doesn’t die in prison.