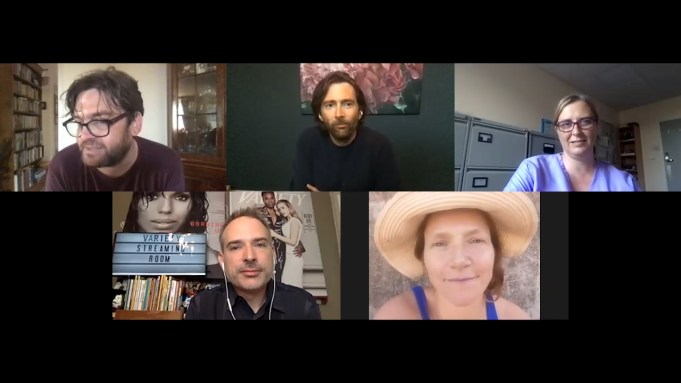 Pye and his wife Sarah Crawford serve as writers for the U.K. television series “There She Goes,” which is based on their experiences raising a child with a chromosomal disorder. The central storyline follows the Yates family, made up of Simon (David Tennant), his wife Emily (Jessica Hynes) and their children Ben (Edan Hayhurst) and Rosie (Miley Locke), who has a chromosome disorder that limits her development.

Tennant and Hynes, joined Pye and Crawford in the Variety Streaming Room, moderated by Variety senior editor Michael Schneider, for a conversation about the show’s first two seasons. The panel included discussions on the show’s origins, dual narrative and reception as a case study in parenting.

“We have a daughter called Joey who is 14 now. She has a chromosome disorder like Rosie in the show and she has severe learning disability. Over the years, I would write funny things that she did, or poignant things, on Facebook,” Pye said, adding that his friends suggested he turn the stories into a show. “There isn’t anything like this, or there isn’t very much like this on telly.”

Over the series’ two seasons, the main focus is on a present-day Rosie, but there are also many interspersed flashbacks that show how the family adapted to her early childhood life. Pye said that an unintended, but welcome, side effect of the joint storylines is that they allow an escape from what would otherwise be a depressing plot.

“We could start at the beginning and we could work our way through, but it would be a desperately depressing show,” he said. “Or we could just do the modern bit where she’s a bit older, but then it would be a sitcom and we wouldn’t be giving the full gamut of what it felt like (to raise her). The modern timeline, or the juxtaposition, it gives you more license to laugh and enjoy the show because in the early timeline, it is depressing, but you know that Rosie will grow up and have a happy childhood.”

To Pye and Crawford, it was important to honestly depict their experiences. They very rarely took creative liberties and deviated from actual moments to add dramatic flair or depth to the plot. So along with the funny or inspiring moments, the dirtier, less polished ones were depicted too.

And for Hynes, the show’s script also did a good job of capturing what she felt many series lacked: an honest representation of motherhood.

Mothers in shows are often sugarcoated or made to fit a sitcom feeling, she said, which often washes out the real experiences people would relate to. Capturing the growth of a family as they all, children included, go through things that are sometimes not “pretty” is challenging, especially if you want viewers to continually tune in. But to Hynes, “There She Goes” doesn’t have that problem.

“I, for so long, had been trying to work out how you would capture motherhood in all its glory, with all of its ups and downs and struggles and difficulties and challenges. I had never managed to work out how you could do that really, without people going, ‘That’s no fun,'” she said. “But this script came along and … they’ve written the character of a mother in a way that I’d never seen before, in a way that absolutely spoke to me.”

The show also does not try to represent the universal experiences of parents raising a child with learning disabilities, Tennant said. This strict adherence to representing the deeply personal truth of Pye and Crawford’s life is instead where the relatability can be found.