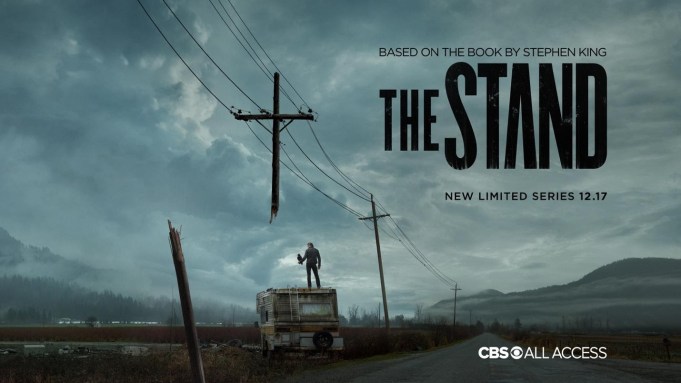 What does life after a weaponized virus decimates the majority of the population look like for the two factions of survivors attempting to go on, amid being on warring sides of good and evil? CBS All Access offers a glimpse in a new trailer for its upcoming nine-episode limited series adaptation of Stephen King’s “The Stand,” released Friday at New York Comic Con.

“The world is now a blank page, make your stand,” Whoopi Goldberg’s Mother Abagail says in the new trailer, which you can watch above.

Some roads are empty, while others are littered with abandoned cars, and one very important one leads to the Boulder Free Zone, where those who Mother Abagail called to came running to rebuild society. “All I know is we dreamed of her and she was real,” James Marsden’s Stu Redman says.

But while Mother Abagail is trying to keep as many people safe as she can, Randall Flagg aka the Dark Man (Alexander Skarsgård) is also trying to reach those left, in need of their devotion.

“There’s bitter days ahead — death and terror. The Dark Man grows stronger every day and soon he’ll destroy all who stand against him,” Mother Abagail says.

“The world is now a blank page and it is there you must make your stand,” she repeats, to book-end the trailer.

“Whenever you’re adapting a masterpiece, an iconic piece of fiction, there’s a lot of pressure to do right by it,” Cavell said. Although the adaptation was a feat, he said King’s work remains grounded in reality despite its fantastical elements, which is something the show wanted to emulate.

Elmore said the series hopes to adapt the characters and archetypes to the modern day, in contrast to the late-1970s era the novel is set in.

One such evolution was with Mother Abagail, who Goldberg wanted to feel “tangible” and avoid the stereotype of an all-knowing magical Black woman depicted in the 1994 miniseries. For Goldberg, Mother Abagail is not a god, but rather a messenger who makes mistakes and doesn’t have all of the answers.

“I needed her not to be the little old Black lady, you know, who has all the magic information — she doesn’t,” Goldberg said. “She’s hopeful that she’s right, but she’s not positive.”

Goldberg’s Abagail presents a stark contrast to Skarsgård’s Flagg, who Elmore described as the “American rock and roll version of the devil.” Although the show’s creators wanted to paint a clear picture of good and evil, they ultimately wanted to give Flagg credibility, presenting him as a viable option for whom to root.

“The Stand” premieres Dec. 17 on CBS All Access and will release new episodes weekly, on Thursdays through early February 2021.

See some additional new images below: