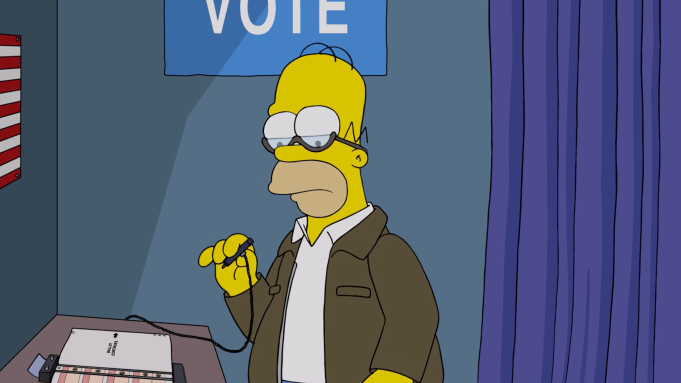 There’s nothing scarier than the 2020 election, which makes it the perfect opener for this year’s edition of “The Simpsons” Halloween-themed “Treehouse of Horror.”

Variety has an exclusive first look at the 31st installment, which opens on Election Day 2020. Marge calls Homer to remind him to vote, and he gets to the polling station just in time — where he seems decided in just about every position (including Amazon Alexa for Governor) except for the presidential race.

That’s when a flummoxed Lisa can’t believe that, after everything that has happened these past four years, her father is still undecided. (To be fair, when asked to remember what’s happened since 2016, Homer can only picture one headline: “Faye Dunaway gives Oscar to wrong movie and is never seen again.”)

A helpful scroll then lists just a fraction of some of the things that Donald Trump has done that makes him unfit for president. (And the list misses plenty, such as the millions of dollars his businesses have charged the Secret Service, or the 280 days of golf that has cost taxpayers an estimated $141 million.)