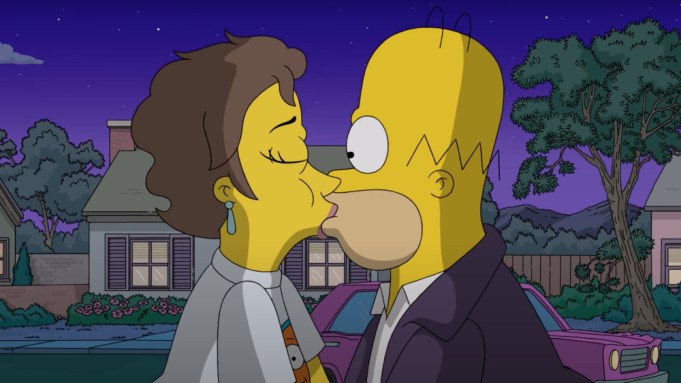 D’oh! Homer’s in over his head on this Sunday’s episode of “The Simpsons,” and Oscar-winning actress Olivia Colman is to blame. (Scroll down for an exclusive clip.)

In episode 689, “The 7 Beer Itch,” Marge, Bart, Lisa and Maggie head to her relatives’ home in Martha’s Vineyard, but with a catch: Homer isn’t invited. Left at home, he is “unwittingly tempted by a British femme fatale,” according to the show’s logline. “Then Mr. Burns makes Homer his romantic go-between with extremely unintended consequences.”

“She’s the woman every man falls for, she’s so charming,” executive producer Al Jean said. “But the one man she wants is someone who doesn’t want her, Homer.”

Colman recorded her part over three sessions, remotely from London. Jean said he and executive producer James L. Brooks consider her “one of the best guest stars we’ve ever had.”

Jean said viewers may be surprised to learn that Colman, who sings in the episode, also “has a fantastic singing voice. She was a total pleasure to work with.”

Later this season, another iconic British performer, Stephen Fry, is also set to guest star on “The Simpsons.”

“The two of them, you give them the slightest note and they do so much with it,” Jean said. “Their training is just amazing.”

“The 7 Beer Itch,” which is Episode 5 of Season 32, was written by Joel H. Cohen, John Frink and Al Jean. Michael Polcino was the director. Watch a clip from Sunday’s episode, which airs on Nov. 8 at 8 p.m. on Fox, below.