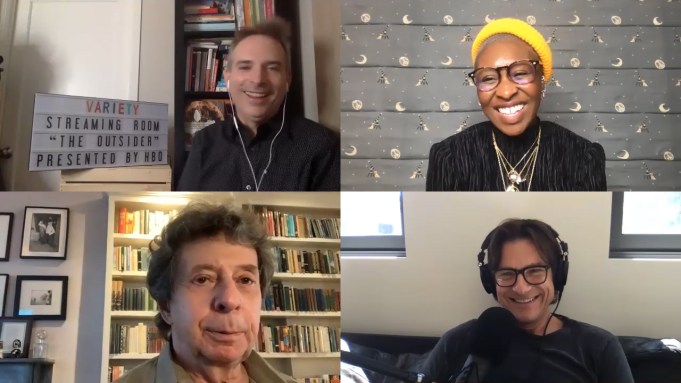 Stephen King novel adaptations are not a new concept, but mastering how to convert the famous author’s work into a compelling psychological thriller was a task that HBO’s miniseries “The Outsider” was able to accomplish, leaving fans to speculate if there might be a sequel to the drama series.

After an exclusive screening, actress Cynthia Erivo, director/executive producer/actor Jason Bateman, along with writer and executive producer Richard Price, joined the Variety Streaming Room to reflect on adapting “The Outsider” for television. They also hinted at a possible sequel.

The drama miniseries follows a seemingly straightforward investigation into the gruesome murder of a local boy, but after an insidious supernatural force edges its way into the case, detective Ralph Anderson and private investigator Holly Gibney are forced to question everything they believe to be real.

When Price was offered the chance to write the pilot for the drama series, which premiered in January, he jumped at the opportunity. “I’ve been a hard geek, a secret hard geek since I was a teenager,” said the series writer about King’s novels. But adapting complex characters from the page onto the screen was one of the biggest obstacles Price had to confront.

“The big challenge was, what you can’t put in a novel,” said Price. “No matter how gripping it is when it’s two dimensional, when it’s on the screen. So all that exposition goes, all the interior lives of the characters they’re gone, everything has to be acted out. That was a big challenge.”

While Price navigated how to convert the novel into a show, Bateman, who starred in the series and directed the first two episodes, enjoyed working behind the camera.

“I was excited about the challenge of that as a director, said Bateman “How do you build that with visuals, with music, with lighting, etc…Richard and I talked a lot about that, about doing what a book can do so well and trying to do that in a visual medium.”

Although Price said King was very “hands off” on the project, the famous author did note that he wanted one thing untouched. “All he asked is that I keep the name ‘Holly,’” said Price. The character, played by Erivo, was reinvented by Price for the screen, which is why Erivo was set on only focusing on the script.

“I just wanted to give myself the chance to create something without having any outside influence…I wanted to find out who she was for myself and make her new in my way,” said Erivo.

While the series aired its last episode back in March, the finale left viewers with a few more unanswered questions. Although Price did not confirm a sequel he did share that he is “working on it right now with HBO.”

Watch the full conversation moderated by Variety’s Michael Schneider below.