‘The Masked Singer’ Reveals the Identity of Baby Alien: Here’s the Star Under the Mask 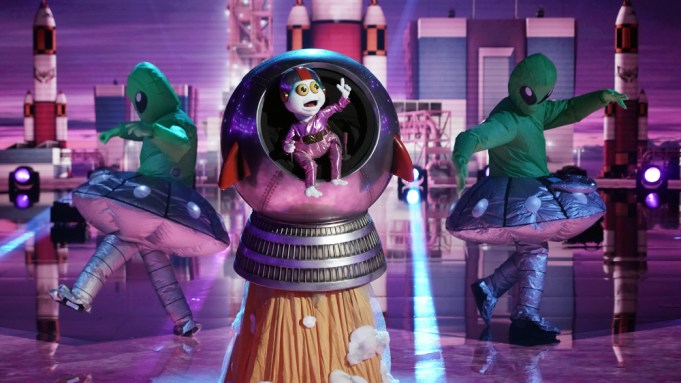 SPOILER ALERT: Do not read ahead if you have not watched Season 4, Episode 4 of “The Masked Singer,” which aired Oct. 14 on Fox.

Former NFL quarterback Mark Sanchez isn’t known for singing, choreography or puppetry. But for “The Masked Singer,” he had to master all three.

Sanchez, now a college football analyst for ESPN, was the fourth celebrity to be revealed this season on “The Masked Singer.” But he didn’t wear just a normal disguise: Sanchez was “Baby Alien,” the show’s first ever costume that came with a puppet.

“I think that needed somebody that was big enough and strong enough to handle the weight of the costume,” Sanchez said. “Because after wearing it for a while, it wears on you a little bit. It’s like 40 pounds. And it positions itself on your upper chest area and lower back and shoulders, so they needed somebody with some broad shoulders to handle it. I was their guy and it worked out well.”

Sanchez said he practiced by getting a bit winded and exhausted before singing, to emulate what his experience would be like on stage, wearing the costume.

“I also wore a really heavy backpack when I would practice at home,” he said. “Just put some dumbbells in it and made it like 35 to 40 pounds and started belting out tunes in the house. Everybody’s kind of like, why are you doing this? And what are you practicing for?”

Sanchez said he didn’t quite know what he was in for at first, and assumed that the “puppet” would be a small hand toy.

“Then I realized I was going to have to put my hand in this weird position, move the mouth, and then with my other hand, move the hand of the puppet,” he said. “And then hit some choreography spots, and then sing. I was like, ‘Whoa, it’s gonna take some practice.'”

To prep for “The Masked Singer,” Sanchez said he employed some of the skills he learned after a decade playing for the NFL: “I’ve learned how to do that, how to create a routine for whatever I’ve done. And to be successful on Sunday it starts the previous Sunday in reviewing your past game and then ramping up for the next game with the appropriate preparation. And so that’s exactly the way I went about it with this. I would compartmentalize each thing, whether it’s the choreography, or the singing part or the puppeteering.

“I would practice with other songs, reading books, listening to stuff on the radio,” he said. “And so that kind of brought the puppet to life. It was all part of the regimen and I had a great time doing it.”

Sanchez also put on a fake Eastern European accent to further confuse the “Masked Singer” panelists — and it worked. None of the show’s panelists figured out that it was Sanchez. Guest panelist Joel McHale came closest at first, name checking Tom Brady, before going with actor Eric Bana as his pick.

New this season, the show’s panelists are also competing for a “Golden Ear” trophy based on their first impressions of each masked performer — and McCarthy Wahlberg, Thicke and Scherzinger have one point each, while Jeong so far has zero.

Wednesday night’s episode was “The Group B Play Offs — Cloudy with a Chance of Clues.” Here were the other contestants and their performances in week four:

Song: “The Bones,” by Maren Morris
Childhood clue: Bottle shaped like a car. “This baby bottle should get your wheels turning.”
Panel guesses: Taye Diggs, Jesse Williams, Brian McKnight
Voice-over: “Singing as a serpent has been like a childhood dream come true for me. You see, I’ve taken an unorthodox path to get here. Starting out, I could barely make rent. To get by I sold clothes. I did manual labor. I had patience. But all I heard from the gatekeepers was no. But I stayed driven. And finally broke through. In a way, those initial failures were a gateway to ‘The Masked Singer.’ The foundation of hard work I’ve built over the years is finally paying off. And I never want this dream to end.”
Previous song: “I’m Gonna Be (500 Miles)” by The Proclaimers
Previous panel guesses: John Legend, Daveed Diggs, Leslie Odom Jr.

Song: “Toxic,” by Britney Spears
Childhood clue: Piñata with little dolphins inside. “I just cracked the case wide open, because this clue has an important poipose to it.”
Panel guesses: Adam Lambert, Lenny Kravitz, Harry Connick Jr.
Voice-over: “Becoming the crocodile has really reignited my love for performing. Something I haven’t felt this passionately about since I was a kid. When I was young, I was just a poor nobody with a dream. I remember standing in my backyard performing to each weed and rose petal. But my own father didn’t believe in my talent. When I got my first paycheck for $100, I handed it straight to him. He was so proud. He cried actual crocodile tears and believed in me. A few years later, shazam, I feel the dreams become reality. Tonight, I’m putting the toxic parts of my past behind me and delivering nothing but love on this stage.”
Previous song: “It’s My Life,” by Bon Jovi
Previous panel guesses: Jon Hamm, Nick Lachey, Donnie Wahlberg

Song: “Moneymaker,” by Ludacris (feat. Pharrell Williams)
Childhood clue: Book: Hairy Tales of the Whatcha Fam, by Doodad Doohickey. “I love a bedtime story and I’m an open book. So Ken, you should know exactly who I am.”
Panel guesses: Cam Newton, Terrell Owens, Kyrie Irving, Armie Hammer
Voice-over: “Here at the ‘Masked Singer,’ I can really let my hair down. Shout out to my glam squad. It takes 36,524 brush strokes to make Watcha camera ready. But I love this hairy situation I’ve gotten myself into. I’m free, free, free. But it’s taken some rough patches to get here. Like the time I was at the height of my career, ready to dance like never before. And I got the watchamacall that shook my world. The news was the flaming. My mom was in bad shape. I wanted to be by her side. But she wanted me to continue the ride. She made me realize her dream was my dream. So I pushed for it. And now she’s going to freak when she finds out that I’m the big wig on stage tonight.”
Previous song: “I Wish,” by Skee-Lo
Previous panel guesses: Swizz Beatz, Dame Lillard, Tyler the Creator

Song: “My Heart Will Go On,” by Celine Dion
Childhood clue: Balloon with feathers inside. “Light as a feather, heavy on clues, this should help you not confuse.”
Panel guesses: Bebe Rexha, Camilla Cabello, Jessica Simpson
Voice-over: “I’m a bit tame in my normal life. But when I step into this costume, my inner diva, Seahorse fierce, comes alive. But this isn’t my first rodeo. As a baby seahorse, I acted so hard to be a hero and make a name for myself. But it only led to rejection. Heartbroken, I posted up in my room for what felt like a thousand years, spilling my soul on to the page. And though I feel like I’ve come a long way since then, like a lot of people lately, I feel like I’ve experienced unimaginable loss and pain. I want my performance to remind us all that no matter how dark the seas get, we just have to keep swimming.”
Previous song: “Only Girl (In the World),” by Rihanna
Previous panel guesses: Halsey, Hailee Steinfeld, Bebe Rexha