‘The Masked Singer’ Reveals the Identity of the Giraffe: Here’s the Star Under the Mask 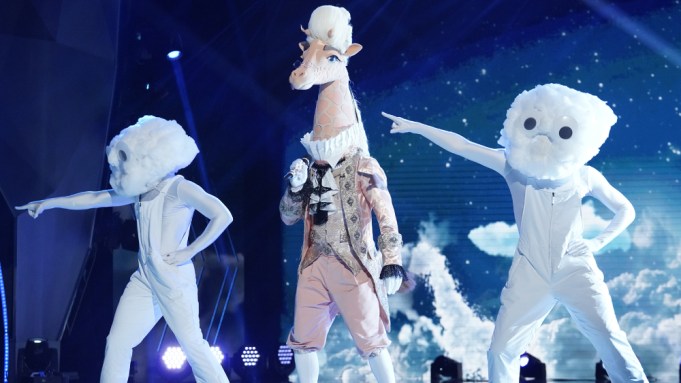 SPOILER ALERT: Do not read ahead if you have not watched Season 4, Episode 3 of “The Masked Singer,” which aired Oct. 7 on Fox.

“The Masked Singer” has said 9021-“no” to Brian Austin Green, who’s the third celebrity to be unmasked this season.

The “Beverly Hills 90210” alum, who had been disguised as the Giraffe, left the show on Wednesday night after performing “Get Down on It,” by Kool and the Gang. (Scroll down to watch his unmasking.)

None of the show’s panelists figured out that it was Green — including Robin Thicke, even though the two were childhood friends.

“We were best friends for like three years,” Green said. “We would spend every night either at his house or at my house. We went camping. We did all sorts of stuff together. If anybody was going to recognize my voice in this costume it was going to be him. He knows the rhythm of how I speak, the sound, the tone of my voice, all of that. He knows my voice better than anyone, probably aside from my parents and my family, and my kids.”

In the end, it was panelist Ken Jeong who went with Shia LaBeouf, while Scherzinger guessed Dale Earnhardt Jr. and Thicke landed on Travis Barker. Jenny McCarthy Wahlberg’s guess was another Green — Seth Green.

Green said the COVID-19 pandemic was “a big motivator” in his decision to join the show. “Everybody’s been sitting at home,” he said. “I’m an entertainer, this is what I’ve done my whole life. You start getting to the point where it’s like, man, I got to do something. I’ve got to be around people doing something or I’m going to go nuts. ‘Masked Singer’ just seemed like the right thing to do. It’s not a competition show. Nobody’s really judging anything. It’s really just about having fun.

“It was almost like this bucket list idea,” he added. “Once it was pitched to me and I thought about it of like, wait, so I’m gonna get to perform in a really elaborate costume. And be completely anonymous. I may never have the opportunity to do something like this again, so why not?”

In going home after two performances, Green said he was fine with it — partly because that costume was so large and hot.

“It was kind of the right amount, not because it wasn’t fun, but because that costume was a lot,” he said. “You sort of get through the two performances, and you feel like, I don’t know how many more of these I can do.”

“The Masked Singer” appearance comes a year after his last Fox gig, the ultra-meta “BH90210” limited series. Green said he was fine with the fact that ultimately “BH90210” was one and done.

“I was always under the impression from the beginning with Fox that it was going to be a summer event, that it was going to be this six episode miniseries,” he said. “So I wasn’t really expecting to come back and do more than that. I know some people were and some people were hoping that they would, but I really feel like we told the story that we had the intention of telling. If all these shows that are coming out are actual reboots of things, this would be the making of one of those. It’s a really fun idea and it ended on the show getting picked up and us at the Fox upfronts.”

McHale opened the show by wearing a Robin Thicke mask and performing the musician’s hit “Blurred Lines” — a first-ever actual performance by a guest panelist who has not also been a contestant.

New this season, the show’s panelists are also competing for a “Golden Ear” trophy based on their first impressions of each masked performer — and because McCarthy Wahlberg correctly guessed Rourke as last week’s unmasked celebrity, she now joins Thicke and Scherzinger with one point each. Jeong so far has zero.

Here were the other contestants and their performances on night three:

Song: “Falling,” by Harry Styles
Clue: Planet: “The second rock from the sun may be far away, but it should bring you closer to me.”
Panel guesses: Gloria Gaynor, Katy Perry, Vanessa Williams
Voice-over: “I picked the popcorn costume because I wanted to step far outside of my comfort zone. But my favorite part so far is flirting with Nick. I’m not the only one here looking like a snack. I wasn’t always a healthy treat. When I was tiny kernel, I suffered from a bizarre condition. I couldn’t eat or sleep. I developed severe anxiety and felt like I was in an emotional prison. Until I dug deep into my pop core and found my voice. Which led me away from the drama, to the other side. Yes, because of my voice I survived. And tonight I can deliver up another delicious performance.”
Previous song: “What About Us,” by Pink
Previous guesses: Tina Turner, Carole Baskin, Mary J. Blige

Song: “Like I’m Gonna Lose You,” by Meghan Trainor (feat. John Legend)
Clue: Witch hat: “We will tip our hats to which ever one of you figures out the clue.”
Panel guesses: Will Farrell and Rachel McAdams; Garth Brooks and Trisha Yearwood; Keith Urban and Nicole Kidman
Voice-over: “Our ‘Masked Singer’ debut was a hoot. And while we love being the first ever to compete as a pair, wheeling around in a giant egg isn’t all it’s cracked up to be. Luckily, we’ve always had each other’s back. Like when I was going through a messy breakup and got swept up through an avalanche of emotions. I took his side and was his anchor, despite beak-lash from our community. And while I was in low places, he was my knight in shining armor. I had an opportunity fit for a queen that I was too scared to do. But I said, ‘you can do it!’ So I took a leap of faith, and it was life-changing. Being there for each other has made us super-tight. Just usually not this tight!“
Previous song: “Say Something,” by A Great Big World
Previous panel guesses: Amy Grant and Vince Gill; Donny and Marie Osmond; Eugene Levy and Catherine O’Hara

Song: “Praying,” by Kesha
Clue: 8 ball: “Will this magic 8 ball help you conjure up my identity? Outlook not so hot.”
Panel guesses: Mandy Moore, Demi Lovato, Katharine McPhee, Carrie Underwood
Voice-over: “I love dressing up as the sun. It’s like every day is Halloween. I really do feel like a kid again. I missed out on a lot of my childhood growing up in a fractured home. But lately, I’ve made up for that lost time. Discovering child-like outlets to make life magical. Like going into the woods to find harmony and nature. I love dirt in my toes. A young memory of mine in the land that slides as my heart walks align. And I’ve become a wiz at cooking up tasty treats for like-minded and material girls. Finally, I’m always looking at the bright side, burning ugly rumors out of my life. Now I’m over the moon in this ultimate outlet for fun and joy.”
Previous song: “Cuz I Love You,” by Lizzo
Previous panel guesses: Katharine McPhee, Demi Lovato, Madonna