‘The Masked Singer’ Shocker: Here’s the Identity of Gremlin, Who Yanked His Own Mask Off 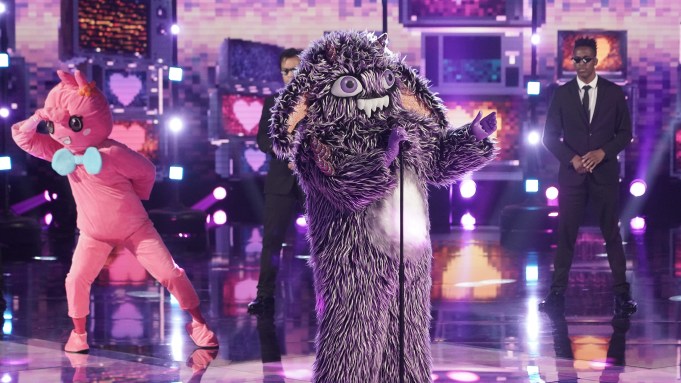 Don’t feed the Gremlin after midnight, don’t let it come into contact with water… and show caution when casting it on “The Masked Singer.” In a series first, “The Masked Singer” didn’t unmask a celebrity on Wednesday night — the celebrity did the unmasking themselves.

Mickey Rourke was the second performer to leave “The Masked Singer” in Season 4, having performed as the Gremlin. The furry, hot costume may have contributed to the premature exit, as Rourke decided to lift his mask after performing. (Scroll down to watch the self-unmasking.)

“Dammit, it’s hot, I’m taking it off,” he said, much to the surprise of the show’s panelists and host Nick Cannon.

Rourke opted not to do any press regarding his exit, further leaving all involved baffled. Asked on the show by Cannon why he wanted to do ‘The Masked Singer,’ Rourke said, “I was in the neighborhood. I like the show, I watched four episodes and they asked if I’d be interested so I watched from the very beginning and all that shit.”

On “The Masked Singer,” Rourke-as-the-Gremlin performed Ben E. King’s “Stand By Me.” Rourke dedicated the performance to his buddy Willy DeVille, a musician who died in 2009. “It meant a lot because this song was sung by one of my best friends ever, Willy DeVille,” he said. “Willy passed away a long time ago and I’ve missed him for a long time. I think the other night for some reason Willy sent me this song.”

Although they didn’t give their final guesses — Rourke took his mask off before they got to that point — but earlier, panelist Jenny McCarthy Wahlberg correctly guessed him. Other names that were guessed included Jerry Lee Lewis (Robin Thicke) and Stone Cold Steve Austin (Ken Jeong).

“Greetings, I’m Gremlin,” the character said in his clue package. “Despite my checkered history, I can actually be quite charming. A true romantic. You may have heard I can be a bit combative. But I have a fluffy side too. I adore all animals, long spins on the beach, and bashing worthy opponents with foreign objects for maximum impact. I also love to cook. Maybe you like what you see. I’d love to have you for dinner. I mean, over for dinner. But first, snuggle up as I serenade you.”

New this season, the show’s panelists are also competing for a “Golden Ear” trophy based on their first impressions of each masked performer — and in week one, Thicke and Scherzinger took the lead because they both chose Busta Rhymes. But in week two, it wasn’t revealed whether anyone’s first impressions were right (but it’s doubtful).

Here were the other contestants and their performances in week two:

Song: “It’s My Life,” by Bon Jovi
Strength: “Tough skin”
Weakness: “Quick to snap”
Voice-over: “Welcome to lover’s lagoon, where soon I’ll croon and make you swoon. Becoming the crocodile was a natural selection, because I’m the happiest in water. And ever since I was a kid, growing up in Hollywood surrounded by heartache and instability, I was forced to develop a thick skin. But crocodiles get a bad rap for being cold-blooded, when actually inside I’m a warm, sensitive creature who just wants to be loved back. And I can’t wait to share my hidden talent as I make a wicked big splash.”
Panel guesses: Jon Hamm, Nick Lachey, Donnie Wahlberg

Song: “Faith,” by George Michael
Strength: “Interstellar cuteness”
Weakness: “Cranky at nap time”
Voice-over: “It’s time for my rebirth. See, I’ve been stuck in second gear for a while. Back when I was the cream of the crop circle, I was in a theater every week. Even beamed to the Tony Awards stage, baby. But before long, I became a second thought, lost in space. So I’ve opened my baby eyes to other passions. Navigating a new route where as the puppet master, my destiny is in my hands. And I got to get the golden mask in my crib.”
Panel guesses: Ralph Macchio, David Schwimmer, Freddie Prinze Jr.

Song: “Only Girl (In the World),” by Rihanna
Strength: “Making a splash”
Weakness: “Dangerous undercurrents”
Voice-over: “Howdy partners, y’all ain’t from these parts, are ya. You know, all my life I felt trapped by my insecurities and shyness, too scared to release the fire burning inside. And you may call me melodramatic but at times I felt lost in this world. Like I was always swimming upstream. But here, I get the chance to stop playing tug of war with myself and finally expose the dauntless diva from within. Underneath this camouflaged armor I’m harnessing the power of the seahorse to show shiny new sides of myself. Leaving all of my prior fears behind on this path to glory.”
Panel guesses: Halsey, Hailee Steinfeld, Bebe Rexha

Song: “I Wish,” by Skee-Lo
Strength: “Eyes on the Prize”
Weakness: “Tangles”
Voice-over: “I’m magical, mythical, jazzy, snazzy and full of pizazzy. You see, people think I’m a shy guy. Especially because I let others absorb my spotlight. As a bright hairball, I can shine alone, as this world is wide open. I can dance with the stars, surf candy bars, buzz with the bees and swing from the keys. It’s time to turn the tables on the world. Because I don’t want to be hair today, gone tomorrow.”
Panel guesses: Swizz Beatz, Dame Lillard, Tyler the Creator

Song: “I’m Gonna Be (500 Miles)” by The Proclaimers
Strength: “Flexible”
Weakness: “High fives”
Voice-over: “Sup, friends? It took a chain of miraculous events to get here. Starting with when I was young. Mischievous and devious, a trouble-making sneakling. I was slithering furiously toward a path of destruction. But my pops saved me by sending me a one-way ticket away from the wrong crowd and toward a path of success. Lighting a fire inside me to aspire to new heights. I didn’t want to cause pain but heal pain. And I hope to raise everyone’s spirits tonight.”
Panel guesses: John Legend, Daveed Diggs, Leslie Odom Jr.