‘The Masked Singer’ Reveals Identities of Whatchamacalit and Serpent: Here Are the Stars Under the Masks 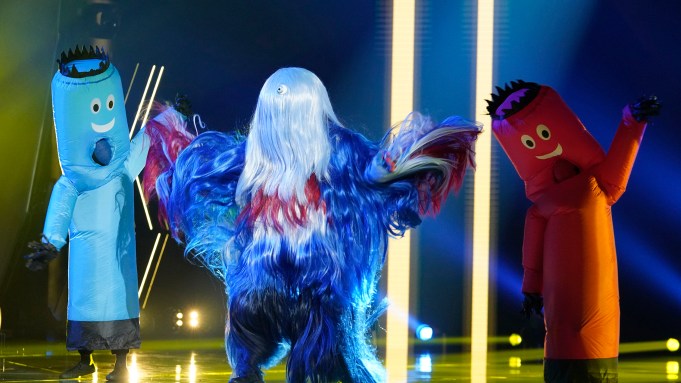 SPOILER ALERT: Do not read ahead if you have not watched Season 4, Episode 8 of “The Masked Singer,” which aired Nov. 18 on Fox.

“The Masked Singer” went with a double elimination on Wednesday night, unmasking two contestants in the process: Basketball star Lonzo Ball, who had been disguised as the “Whatchamacalit,” and viral sensation “Dr. Elvis” Francois, the so-called “singing surgeon” who became famous in the early days of the COVID-19 pandemic. (Watch the unmaskings below.)

Ken Jeong, a huge basketball fan, was the only panelist to figure out that Whatchamacalit was Ball.

“I’m hoping my swag will carry me through,” Ball, as Whatchamacalit, said in the clue package. “I’ve always tried to exceed expectations.” Added a disguised friend identified as a high school teacher and mentor: “He had a good head on his shoulders, very focused and hard working.”

As for Serpent, Scherzinger figured out it was Dr. Elvis, partly because she had performed with him last spring on Fox’s “After the Mask” recap show. Jeong thought it was Daveed Diggs. McCarthy Wahlberg went with Taye Diggs. Both Thicke and Hines thought it was Donald Faison (“Scrubs”).

Francois told Variety that “The Masked Singer” approached him about appearing as a contestant after that “After the Mask” appearance.

“At first didn’t think would be possible with busy hospital schedule. But somehow, I guess it was meant to be and it ended up working,” he said. ” I obviously had to be straightforward with my chairman and tell them where I was going and have them sign NDAs.”

The co-residents, fellows and nurses that Francois works with were immediately suspicious at his absence. “I am not a very good liar. I told them I’d be going to Los Angeles for a few weeks for a health conference,” he said. “Because anyone who has a brain knows that all health conferences have been postponed.”

Since “The Masked Singer” returned this fall, Francois said he’s been hearing from friends, texting him about their suspicions. “It’s been crazy, because for the past few months, anytime someone starts conversation with those words, ‘this is gonna sound weird,’ it always comes back to the ‘Masked Singer,'” he said.

As for doing the show during the pandemic, Francois said he was put at ease by the show’s safety regimen. “That was one of my early trepidations about going and doing this, taking time off,” he said. “But I will say that, personally knowing the CDC guidelines and what the government officials are recommending and knowing what hospital staff are recommending we do to minimize the spread of COVID-19, it was incredible to see every single person getting tested every single day, quarantining in rooms, waiting for the rapid results before they could come on set. Everyone maintaining social distancing guidelines.

“Finding a way to still deliver a product on television that will make people smile and make people happy, but in a safe and effective way, was really special to see,” he said.

Despite his brush with fame, Francois said he won’t be giving up his day job.

“Since I was seven years old, I’ve always wanted to be a spine surgeon,” he said. ” I can’t see myself ever leaving that passion. But music is something that is like a heartbeat to me and it’s not something that I would ever stop. So the ideal situation would be to find a way to keep sharing both music and medicine. Currently outside of my crazy work schedule, I’m working on trying to write some original music and so hopefully I can share that with people soon.”

Dr. Elvis, as Serpent, sang “Cool,” by Jonas Brothers, for his final performance. In previous episodes he also sang “I’m Gonna Be (500 Miles)” by The Proclaimers, and “The Bones,” by Maren Morris.

“I went from doing spine surgery on a Friday to on Monday, I’m working on dance choreography and singing live,” he said. “So it was definitely fish out of water experience.”

New this season, the show’s panelists are also competing for a “Golden Ear” trophy based on their first impressions of each masked performer — and going into the episode, McCarthy Wahlberg was in the lead with three, while Thicke and Scherzinger had two points each, and Jeong so far had zero.

For Whatchamacalit, Jeong picked Damian Lillard. Thicke’s first impression was Tyler the Creator; McCarthy Wahlberg went with Winston Duke; Scherzinger named “Uncle It.” No one picked up another point.

Here were the other contestants and their performances in week eight, “The Group B Finals — The Mask Chance Saloon”:

Song: “…Baby One More Time,” by Britney Spears
Clue: “Seahorse was never in a girl group.” (Delivered by Astronaut/Hunter Hayes.)
Panel guesses: Kesha, Kellie Pickler, Sia
Spiritual advisor voice-over: “Lord knows that Seahorse is the real deal. I’ll never forget the first time that she came over. This girl next door with just a backpack and a guitar, ready to work. When she started to sing, I was stunned. I didn’t expect such a raw, powerful voice so full of emotion. I must confess, she even made this tough hombre cry. She’s just so unassuming, she doesn’t even know how good she really is. Seahorse, I know you’ve put in tireless dedication and devotion to make it to the Super Six. No one deserves it more.”
Previous songs: “Only Girl (In the World),” by Rihanna; “My Heart Will Go On,” by Celine Dion
Previous panel guesses: Halsey, Hailee Steinfeld, Bebe Rexha, Camilla Cabello, Jessica Simpson

Song: “Bleeding Love,” by Leona Lewis
Clue: Jared Leto, Jordan Knight, Justin Guarini
Panel guesses: “Croc was in a huge cult classic movie.” (Delivered by Bee/Gladys Knight)
Friend voice-over: “I’ve worked with some of the biggest names in the biz, but Croc is my ride or die. We’ve been all around the world together. Once we traveled to six continents in 100 hours. And despite his hard exterior, he’s a total softie who puts his heart 100 percent into everything he does, even if it’s just playing video games. He’ll battle with me all night because he’ll relentlessly go step by step to get the high score. Whether it’s video games or ‘The Masked Singer,’ this guy has a one-track mind. So Croc, you do you baby. Show these guys a side of yourself they’ve never seen before.”
Previous songs: “It’s My Life,” by Bon Jovi; “Toxic,” by Britney Spears
Previous panel guesses: Jon Hamm, Nick Lachey, Donnie Wahlberg, Adam Lambert, Lenny Kravitz, Harry Connick Jr.