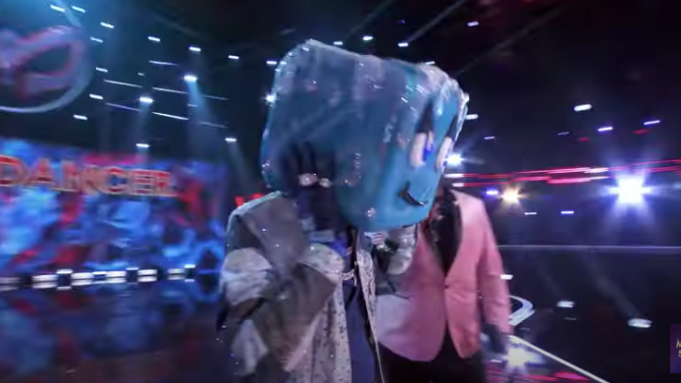 Another costume for Fox’s upcoming reality competition series, “The Masked Dancer” has been revealed, and Variety has obtained an exclusive first look, which you can see in the promo above.

“The Ice Cube costume signifies a number of things: a love of science and possible believer of climate change. Could it be a politician or a reporter? It also represents the fact that the dancer behind the mask spent many a lonely evening eating frozen TV dinners, thanks to his/her busy parents’ hectic careers. The Ice Cube is a definite product of his/her generation. But just what generation is it? Tune in to find out,” said executive producer Craig Plestis.

Ice Cube can only be seen in a brief clip in the promo, although he/she is featured prominently in the key art, which you can see below. With “Take it off” being chanted in the promo, the dancer is seen at the time of elimination, with his or her hands on the mask (aka the cube), ready to reveal who is underneath. Of course the clip cuts well before that answer is given, though, as the point of the show, based on a South Korean format, is to watch celebrities dance completely anonymously, as the panel and audience try to guess who is performing for them. The panel consists of Ken Jeong, Paula Abdul, Brian Austin Green and Ashley Tisdale, with Craig Robinson serving as the host on the show.

The promo also offered a glimpse at a group performance by a number of the other costumed-contestants, including Sloth and Zebra.

“The Masked Dancer” is produced by Fox Alternative Entertainment and Warner Bros. Unscripted & Alternative Television. Mun Hwa Broadcasting Corp. created the original, international format. Executive producers for the series, which is set to premiere in December on Fox, are James Breen, who also serves as showrunner; Plestis; Dan Martin and Ellen DeGeneres.

“The Masker Dancer” will premiere Dec. 27 after the NFL double-header and then move into its time period premiere on Jan. 6.